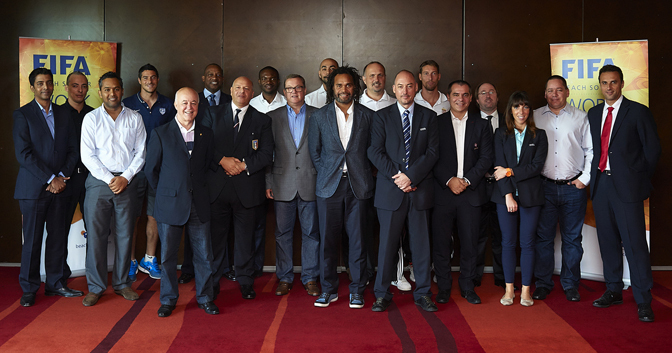 Beach Soccer Association (BSATT) President Kyle Lequay and Vice President Yuri Chapman were sent by the TTFA as its representatives to the workshop which took place on Friday November 4th at the Westin Mina Seyahi Hotel as officials and guests contributed their views on key issues surrounding the sport while also gaining information and inspiration to take back to their respective teams, nations and organisations.

(BSATT is a member of the TTFA)

As the world looks back on the 2016 Olympics in Rio, guests at the workshop were invited to take part in discussions regarding how beach soccer can be incorporated into ‘the greatest show on earth’.

The event also focused attention on women’s beach soccer, following a season in which the female game has made great strides.

Commercial strategies and engagement with beach soccer as a brand were also among the talking points as the sport targets further growth in 2017, while next year’s calendar was also discussed.

The fifth topic of the workshop was one that resonated throughout the sport, with delegates and guests given a preview of the much-anticipated FIFA Beach Soccer World Cup in the Bahamas.

Also present at the workshop with Trinidadian Brent Rahim who a member of the FIFA Development Department. He delivered a presentation during the workshop on the FIFA Teaching manual and FIFA Forward Programme. Rahim is now based at the FIFA Headquarters in Zurich.

The new edition of the Samsung Beach Soccer Intercontinental Cup Dubai also took place during the week of activities.

T&T’ s National Beach Soccer Team is preparing for the CONCACAF Beach Soccer World Cup qualifiers set to take place in Bahamas in February, 2017, during which they will face the United States, Antigua and Barbuda and US Virgin Islands in the group phase.