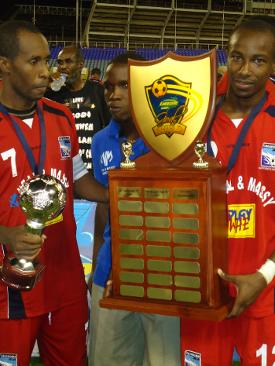 Twenty-two year old goalkeeper Glenroy Samuel, in his first game since resigning for the “Eastern Stallions” saved a spot kick from young Connection substitute Johan Peltier as Caledonia won 4-3 in a penalty shoot after a tight, tense affair.

Regulation time ended goalless and was most memorable for the ground being farcically thrice plunged into darkness. And the two teams traded goals in extra time as a Radanfah Abu Bakr header was negated by a successful Clyde Leon penalty.

At the death, though, Caledonia prevailed from the spot for its first ever Caribbean title in a season that saw the Stallions lift three of five domestic Cup titles at stake and book its first appearance in the CONCACAF Club Championship.

It was a very eventful Final of the Caribbean Football Union (CFU) Club Championship at the Mannie Ramjohn Stadium for both teams with the encounter interrupted three times by darkness.

A power outage in the first half and further interruptions in the second period marred some exciting football which ended goalless at the end of regulation time.

An additional 30 minutes saw Radanfah Abu Bakr head Caledonia in front and Clyde Leon level the scores from the penalty spot, forcing the match into kicks from the penalty mark where the Morvant/Laventille club proved supreme.

Twenty-two year old returning goalie Glenroy Samuel, in only his first start for the Jamaal Shabazz/Jerry Moe combined coached Caledonia, made a block-out against Connection’s Johan Peltier in the fifth kick to run off with the Caribbean title.

Both Caledonia and 2011-12 Digicel Pro League Champions, W Connection, had already booked their places in the Group stage of the 2012-2013 CONCACAF Champions’ League which kicks off at the end of July by reaching the CFU Final.

Puerto Rico Islanders, which defeated Antigua Barracuda 2-0 with goals by Joshua Hansen and a Jonathan Frias Fana penalty in the CFU third place playoff in the earlier match on Thursday, grabbed the third and final CCL spot.

The Islanders (CFU third place) enters the group of David Beckham's LA Galaxy of the MLS and El Salvador’s Isidro Metapan in the Group stage.

Caledonia, winner of three out of five domestic titles this season with the First Citizens Cup, FA Trophy and the Lucozade Sport Goal Shield, were lucky not to concede a goal in the 12th minute of play.

It was from a superbly taken left footed volley by Hashim Arcia that rocked the lower upright when a clearance by Abu Bakr fell into his path outside the area on the run of an excellent buildup by Connection.

Four minutes later the lanky Connection forward hooked an effort overbar off a Kern Cupid right side cross and teammate Joevin Jones tried his luck in the 35th minute but was way too high.

He then pulled off another save six minutes from the half denying Rennie Britto who was provided a well measured pass by Arcia.

R. Britto tried again seconds later spilling wide after receiving another Arcia pass inside the area as Connection dominated the efforts on goal.

Two minutes inside the second half Caledonia’s Devorn Jorsling, scorer of the second goal against Barracuda in the 2-0 semi-final round win, executed a low freekick from just outside the area, after Cornelius Stewart was barged by Elijah Joseph.

The effort posed some trouble for goalkeeper Williams as it slipped below the wall, however handled it well in the end.

Connection was gifted an opportunity in the 56th minute when an errant pass found the boot of Arcia on the left of goal but disappointingly dragged his effort wide to the delight of goalkeeper Samuel.

Samuel posts were under threat again in the 59th minute when Arcia threaded a diagonal pass to teammate Jerrel Britto who smashed his effort over.

Arcia later defeated the glove of Samuel in the 76th minute with a delicate effort only to see the ball cleared off the line by a retreating Stephan David.

But eight minutes inside extra time Caledonia found the back of the net for a 1-0 advantage when Abu Bakr welcomed a deflected substitute Conrod Smith corner, heading it past goalkeeper Williams.

It was also from a header that Abu Bakr hand Caledonia its opening item against Barracuda on Tuesday.

Connection then leveled the scores 1-1 in the 104th minute from a converted penalty strike by Leon.

Two minutes earlier referee Antonius Pinas of Suriname pointed to the spot when R. Britto and Caledonia defender Nuru Abdullah Muhammad tangled and went to ground in contest of a highball after Samuel made a shutout against substitute Peltier.

Leon made no mistake converting smoothly past a fully stretched Samuel.

Peltier, who later choked under pressure on kicks from  the penalty spot, was shy of an item and what could have been the winner in the 110th minute by curling a strike just wide of the far upper corner.