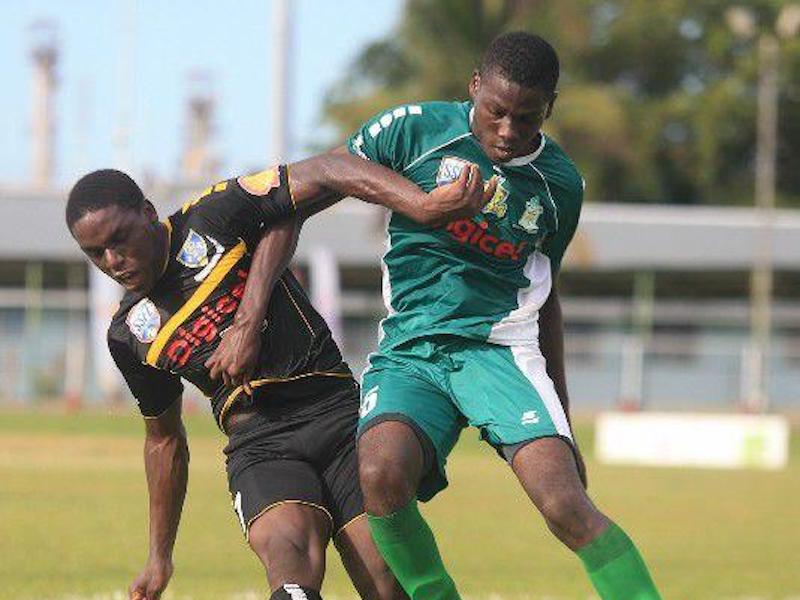 Anfernee Bascombe is proudly looking forward to fulfilling a first.

“It was always my dream to go abroad and play football and be the first one in my family to go to college,” stated the 20-year-old Trinity College defender.

In September, 20-year-old Bascombe heads to Texas in the United States to pick up a football scholarship at Rangers College.

For Bascombe, winning a scholarship is the culmination of a dream he had since Form One, and could also be the start of something greater in the future.

Bascombe proves that regardless of circumstances, it is possible to achieve great things.

He grew in the government plannings (housing project) at Hirondelle Street, Morvant, known as the “Fourth Stories”, along with his father, mother and two younger brothers, Jayden and Darryl Jr.

He sees it as both a great opportunity and also a huge responsibility.

“From since I started thinking about my future, this is the stepping stone I wanted to get,” stated the six-foot-two-inch right back, who also plays centre-back.

“I have built a stepping stone for my little brothers,” he added. “So, if they see me do it, they will want to do it, too.”

He has felt the love from friends and neighbours, wishing him well on his journey.

“Everyone has been great,” he said. “They have told me to go for my dream. There has been no negativity at all.”

Abroad, Bascombe hopes to help his college win a few trophies and ultimately, to play Major League Soccer in the United States or professionally elsewhere.

“That will be my goal when I go abroad — learning more about the game and about the body, and how to treat the body.”

Other than staying at home and relaxing, Bascombe says his only true passion is football and his love for the game led to him to captaining Police in the TT Pro League for three years.

“Football is my main focus,” he said. “I see an avenue to do things through it and I have a love and passion for it.”

Bascombe began his career in the secondary schools Championship Division with Belmont Intermediate (now Belmont Boys) where he played for five years before transferring to Trinity College, Moka.

There, he repeated form five in the first of two years playing for the Maraval school and confessed to feeling some initial anxiety about the move to Moka.

He was soon made to feel at home and thanked his fellow students, footballers and coach Ken Elie for helping him to settle. But he still had to adjust to a playing at a higher level.

“I knew to myself it would have been a higher level of football, so I had to push myself harder,” he related.

“Overall, the adjustment process was not as hard because, although everybody was pushing each other, it was like family up there. But for me, mentally, it was hard because it was adjusting to higher level of football from playing in the Championship and then coming up to the Premiership.”

It was special to Bascombe that former Trinity College teammates Temesgn Tezera, Ronaldo Jacob and striker Kai Phillip — who played for St Anthony’s in his final year — will all also head to the United States to pick up football scholarships.

These teammates all made him feel at home at Moka.

“The whole school environment was like a family up there, whether it was rugby or dragon boat (racing),” he said. “Everything was welcoming. Every player on the team was welcoming. From the captain straight down to someone on the bench.”

Finally, he thanked many people for helping get him the opportunity.

“But most of all, I would like to thank God,” Bascombe said.