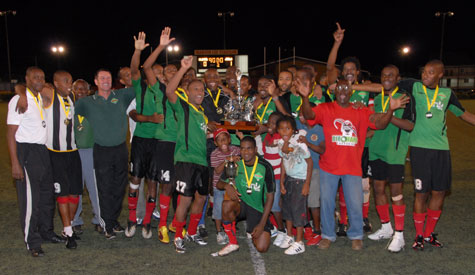 An early Kennedy Hinkson strike and some superb saves by goalkeeper Cleon John were influential in San Juan Jabloteh being crowned the 2010 FA Trophy Champions in Friday’s Final at the Marvin Lee Stadium with a 1-0 win over DIRECTV North East Stars.

Jabloteh stole a 1-0 advantage two minutes into the match when Hinkson received a pass on the right and from inside the area the speedy winger held off Kevaughn Connell all the way to the edge of the six yard area before slamming a shot past Michael Woods and into the far netting.

The early goal proved the winner after ninety-four minutes of play giving the Terry Fenwick coached side the FA Trophy and the $80,000.00 winners take.

Meantime 2003 FA winners North East Stars, which enjoyed a 1-0 win against Jabloteh in the final of this season’s Lucozade Sport Goal Shield last August, had to settle for the runners-up share of $40,000.00 on Friday.

Hinkson gave the 1998 and 2005 FA winners the advantage on Friday night, but it was goalkeeper John who preserved that advantage throughout to put his team’s name as 2010 champs.

In the sixth from a North East set piece at the edge of the Jabloteh area saw John execute a brilliant save to keep out Gary Glasgow blast.

John made an even bigger save in the 30th minute which had the Marvin Lee Stadium crowd (the majority from North East Stars) at its loudest when Glasgow met a long pass forward with a powerful volley only to be denied by the Jabloteh goalie.

On the stroke of halftime Jabloteh missed out on a wonderful opening when Jason Marcano wrong-footed his shot wide with only goalkeeper Woods to beat to the disappointment of the San Juan supporters after Hector Sam threaded a low pass through the North East defence.

Fifteen minutes inside the second period, despite taking a more defensive approach, Jabloteh created an opening when Marcano whipped a cross from the left finding Guerra, but the midfielder’s tame head was easily gloved away by Woods.

However Jabloteh’s decision to defend their one goal advantage created a lot of scares in defence, however goalkeeper John was at his best when needed.

In the 92nd minute of play the Jabloteh custodian showed why he is considered one of the best goalkeepers in Trinidad and Tobago when he made a reflex save to deny a low blast against Sean Fraser to keep a clean sheet, helping his side capture the FA Trophy.

North East Stars winger Kevaugn Cornell had barely settled into his role as make-shift left-back for the night, when Hinkson took him on a determined drive up the right flank.

Hinkson cut inside on his marker, and found the far corner with a shot across the dive of Stars goalie Michael Woods.

Then, Hinkson was off to the races to celebrate his early goal with teammates. Jabloteh fans were jumping in the packed stands, and for that moment Jabloteh's English head-coach Terry Fenwick was a happy man--before he was eventually chased from the bench by fourth official Shane De Silva in the second half.

In the main match, Hinkson might have given Jabloteh a down payment on the FA Trophy, but it was definitely their keeper John who paid off the rest of the bill, by making two timely saves in either half.

John was first called into action in just the sixth minute when he turned wide a free-kick which Stars veteran striker Gary Glasgow had curled from the left edge of the penalty area.

And the Jabloteh keeper earned a bonus on the half hour when denying Glasgow again with a world class save. Once one of the best strikers in T&T, Glasgow might not have produced a sweeter volley in the last ten years than when he met Akeil Guevara's deep cross into the penalty area. "Goal!!" many thought.

Then, "no goal" as John pulled off a spectacular save to keep the ball out of his net. Glasgow had a second bite as the ball rebounded his way, but he could not match his first effort, hitting wide of the target. Glasgow held his head.

Jabloteh were the more enterprising team in the first half. Dribblers Jason Marcano, Ataullah Guerra and young Johan Peltier were prominent, as Jabloteh bossed the midfield. However, they created few clear opportunities for captain Hector Sam, the lone striker.

Nearing the end of the half both teams wasted chances. First, Stars midfielder Jeromie Williams put a chip over the crossbar. Then, at the other end, Marcano hit a "wildman" shot wide from a good position.

Jabloteh obviously aimed to keep what they already had, and began the second half defending with everyone behind the ball, doing most of their attacking on the counter.

In the 53rd minute, Jabloteh turned a defensive position around their penalty area into a quick counter-attack. They outnumbered Stars three to one, but teenager Peltier was school-boyish and dribbled excessively, allowing Stars to recover.

And two minutes later, Peltier broke through on the right but hit a wild shot wide with just keeper Woods to beat.

Stars applied plenty pressure late in the match. But goalie John again came up big for Jabloteh. First, he picked up a hard knock when diving head-first to take a pass off the boot of striker Anthony Wolfe.

"Keep the pressure on. It coming," Stars owner Darryl Mahabir shouted excitedly from the covered stand. And when in added-on time Stars' Jamaican striker Sean Fraser hit a low bullet from the edge of the Jabloteh penalty area, it looked like the equaliser.

But John again showed a safe pair of hands when dropping low to stop the ball cleanly. There was no margin for error, and the keeper made none.

A second minute strike from speedy Kennedy Hinkson and some superb goalkeeping from Cleon John proved a worthy combination, as bMobile San Juan Jabloteh eked out a 1-0 win over DirecTV North East Stars on Friday in the T&T Football Federation FA Trophy final before a small crowd of about 1,200, mostly Stars’ supporters, at the Marvin Lee Stadium, Macoya.

Speaking after the match Jabloteh coach, Englishman Terry Fenwick, who was red-carded in the 75th minute by referee Lee Davis, said it was a deserved victory by his players.

“We knew we had been playing good football all season long but the results were just not going our way. “All the clubs knew we made it difficult for them in most matches and against Stars we showed great spirit.”

Fenwick added: “We had three one-on-one chances to put the result beyond doubt but did not take them but in the end we managed to keep the 1-0 lead.”

Jabloteh began the match as slight underdogs due to the absence of three regulars starters in national Under-20 player Sheldon Bateau (MLS trials), national Under-23 defender Robert Primus (overseas trial) and the suspended Joel Russell.

On the other hand, Stars’ coach and former Jabloteh and national team defender Shurland David had afull slate of players to choose from and he went in search of adding to his club’s 2003 success.

Jabloteh got the perfect start inside two minutes of the start when Hinkson, formerly of the United Petrotrin, collected a pass on the right and held off the challenge of Stars’ Kevaughn Connell, before hammering a right footed shot past goalkeeper Michael Woods from the edge of the six-yard-box.

However, the Jabloteh custodian was equal to the task to keep out the goalward effort. John, who was eventually voted “Player of the Match,” was called into action again on the half-hour mark to deny Stars and Glasgow one more time, this time in much more acrobatic style.

The nippy Glasgow latched onto a ball over the top of the Jabloteh back-line and unleashed a powerful volley only to be denied by John to the dismay of the Stars’ supporters.

Jabloteh almost made the Sangre Grande Boys pay for their missed efforts on the stroke of half-time but after being sent through by fellow striker Hector Sam, and with only goalkeeper Woods to beat striker, Jason Marcano dragged his effort wide of the mark.

On the resumption, Stars grabbed the early initiative, as Jabloteh took a more defensive approach.

Despite its change in tactics it was the 1998 and 2005 winners’ Jabloteh which had the first opening of the second-half on the hour mark, when Marcano turned provider and whipped in a left sided centre for Atuallah Guerra, who headed straight to Woods.

From then on, Stars took the match to the San Juan Club, as it went in search of a much needed equaliser. Unfortunately for David’s team, John was in his best form.

Jabloteh was beginning to buckle under the pressure when coach Fenwick was removed from the bench by referee Davis after an exchange of words with fourth official Shane De Silva.

The Jabloteh players, now under the guidance of second choice goalkeeper Brian James on the sidelines, kept their cool on the field, and along with John, held on until the final whistle.

It was not all smooth sailing though as two minutes into time added one John was forced into another important save as he kept out a low blast from Jamaican forward Sean Fraser to preserve his team’s 1-0 lead and with it the $80,000 winners cheque and the prestigious trophy.

John, who rightfully copped the “Player of the Match” award, collected a gift voucher valued at $1,000 plus a trophy courtesy of The Fan Club, Movie Towne.

His team-mate, national Under-20 midfielder, Johan Peltier was named the “One for the Future” and received a $1,500 cash prize and trophy courtesy S2 Events.