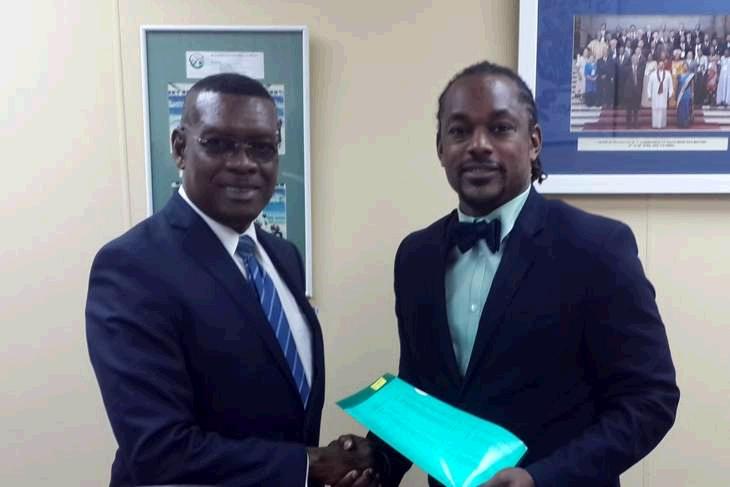 In what can be considered by many locals in T&T to be a ‘papi show’, the current war of words between the Trinidad and Tobago Football Association President, Raymond Tim Kee and the Minister of Sports, Brent Sancho falls just short of the embarrassment experience when U.S. based British comedian John Oliver expressed his views about the alleged corrupt king pin Jack Warner in a 5 minute TV block on local Television.

Tim Kee was reported saying in the T&T Express newspaper, "The Football Association has declared that money which Prime Minister Kamla Persad-Bissessar committed to fund Trinidad and Tobago's participation in the 2015 CONCACAF Gold Cup, has amounted to just promises thus far."

He further went on to say, "But, Sport Minister Brent Sancho counters that the Trinidad and Tobago Football Association (TTFA) had already used up 90 percent of a $9 million Cabinet note, which the Prime Minister and then acting Sport Minister Rupert Griffith promised last November to assist football up to the Gold Cup."

Imagine no one can answer where the 9 million has gone or how it was spent, an act even David Copperfield himself would have found hard to pull-off. This news baffled many Soca Warriors Online (SWO) supporters including myself and I instantly began to do a little research while giving both men a chance to come clean and cease with the bashing and thrashing of our beloved sport. A sport that has been at the muddled in controversy since the beginning of time under former FIFA vice-president Jack Warner.

Anyone who follows soccer will know the latest FIFA controversy that involves former TTFF advisor Jack Warner is undoubtedly painting a bad image of Trinidad and Tobago. This is nothing new though, as many of T&T’s politicians engage in similar underhand practices. The current government are probably the most corrupt in T&T's history. LifeSport programme alone managed to embezzle $34 million from right under the noses of the T&T government. The single biggest payment of the programme for no work. T&T is a country now rife with corruption where national sports programs are used as vessels through which millions can be embezzled without consequences.

As a result of said corruption, the TTFA is now broke and national teams are usually sent out to tournaments under-prepared. Rumor also has it that even players have to use their credit cards to cover hotel accommodation expenses at times.

As if T&T football hadn't suffered enough, now the leaders of the TTFA and the Minister of Sports Brent Sancho are constantly locked in battle over funding, while using our football as a political tool to achieve the upper hand.

Mr. Sancho is a People Partnership (PP) representative while Raymond Tim Kee is a member of the opposing People National Movement (PNM) party and is also the current mayor of Port of Spain. By these circumstances one can easily deduce that the influence of politics negatively impacts the national football program, leaving the players, coaches and fans to suffer the most; while making sponsorship money hard to come by.

With regard to the present conflict, Sancho is insisting that the TTFA had gotten most of what was promised, but he does not rule out the possibility of giving them further assistance. “There was a cabinet note for $9 million dollars,” Sancho admitted to the T&T Express. “Ninety percent of it has already been used up. The Cabinet note was specific for salaries, arrears of salaries, and a range of specific things that related to the Cabinet note. They have used up the majority of it. Moving forward, they will have to decide how they will move things forward.”

Both parties also differ on whether the TTFA had met Sancho's criteria for providing audited accounts before further funds are released for football. Tim Kee insists that the TTFA had done so within the time-frame set to provide audited accounts, while Sancho says it was not completed. What is interesting however, is apparently Minister Sancho laid conditions on payments that are to be made to the TTFA after former Minister of Sport Mr. Rupert Griffith and his cabinet had already approved the release of funds.

No one really knows the daily operations of the TTFA and how the organization acquire funds to host tournaments and play one or two friendly games; and because of this one must give the Association some credit, as they have been flipping backwards to keep T&T’s national football program afloat.

The TTFA is also in the process of erecting a training facility in south Trinidad and again, this project is hit by another hiccup as they are waiting on the government to release the land on which the facility is to be built. In 2014 the TTFA had allocated a sum of US$500,000 by FIFA to get the project off the ground and it was expected to be complete by April 2015. A year later the project is at a stand still and may be cancelled.

Players and coaches are also frustrated with the current situation. Promises have been made and broken and some staff including players are yet to get paid since T&T’s last participation in the Caribbean Cup. Coaches and technical director positions seem to be recycled or just appointed without a proper selection process and to top that off there is no fixed schedule for teams to follow.

To make matter worse, Mr. Tim Kee has also been very reluctant in dealing with the public. He does not take the time to greet and thank supporters.

Only recently the TTFA president resurfaced and came to the defence of his former boss FIFA vice-president Jack Warner for standing up for this nation’s football interests during his tenure as both CONCACAF and Caribbean Football Union (CFU). Tim Kee further stated that he wants to stay in T&T football for 4 more years despite the financial hardship it endures.

The TTFA also operates silently, a trait that was prevalent in the previous administration and one that can be viewed as a major reason for mistrust from those looking in. Whatever the reason for continuing with this practice, it is affecting the game and T&T could plunge to lower depths if things don't change quickly.

Minister Sancho, a former T&T national defender is investing $1.7 million dollars on Women’s Premier League (WPL) which is schedule to start on June 19 to July 31. It is not a professional league but an international tournament comprising of national, club and college athletes from Trinidad and Tobago, the Caribbean, the Americas and England. Thus far, players from USA, Canada, Guyana and the Caribbean have already touched down for meetings ahead of the campaign. Sancho mentioned that the WPL is to develop female players and he has shown clear interests in assisting where support from the TTFA has been lacking. It should be noted though that the funding for this program is alleged to be sourced from the initial 9 million dollars that was allocated by the Government under former Minister Griffith.

Imagine how much $1.7 million dollars would have benefitted the national Women's programme. Even spending it to improve the Women’s League Football (WoLF) by improving the teams and for over a longer period of time but everyone seems to have their own agenda. So basically the Ministry of Sports is spending $1.7 million to host a mini 1 1/2-month tournament when that same money could have gotten our Women's teams (youth and senior) a series of international friendlies. In related news, on Tuesday the T&T Senior Women Warriors thrashed a WPL All-Star XI 9-2.

Sancho, who once owned Central FC has taken his share of licks as a national player and club owner. He has been blacklisted during the World Cup Warrior impasse and the club he owned was one of a few that did not get any financial support from former Minister of Sports Anil Roberts under the PP government, while other clubs linked to Roberts such as Malabar FC were pocketing in the thousands every month.

Interestingly, State owned enterprises like; Petrotrin, NP, TSTT and the National Gas Company (NGC) contributes massive amount of cash to cricket while football is totally ignored and gets absolutely nothing. For example, in 2014 National Gas Company of Trinidad and Tobago contributed over $13 million to facilitate cricket tournaments, development programmes and financial support to national teams at various levels. However, should the PNM win the next election, the table can surely turn into Tim Kee's favor, hence the reason he wants to serve another 4-year term.

It also seems to many observers that the Football Association is stuck and has no idea how to be more self-sufficient and as a result the FA gets beaten up like a step-child. The T&T government also appears to care less, hence the reason they went ahead and created a Women Premier League (WPL) without the blessings of the TTFA. It's a competition to outshine the other.

A member of the TTFA declined to make any comments and this appears to be the usual stance of the cash-strapped Association, as they stay in the background expecting others to fight their battles. Minister Sancho however was eager and ready to give his take on the matter, but soon disappeared and never bothered to follow up on his promise. I was told he is in senate and has been for the past 3-days.

At this point though, T&T football seems like a game of chess, where there are two opponents battling it out for the sake of power while the game, players, coaches and fans can be viewed as pawns frequently sacrificed for one side to gain an advantage.

Here is hoping, praying and begging that all said parties can put their differences aside for the good of the game or at least for the remainder of the year and save our beautiful game before it's to late.