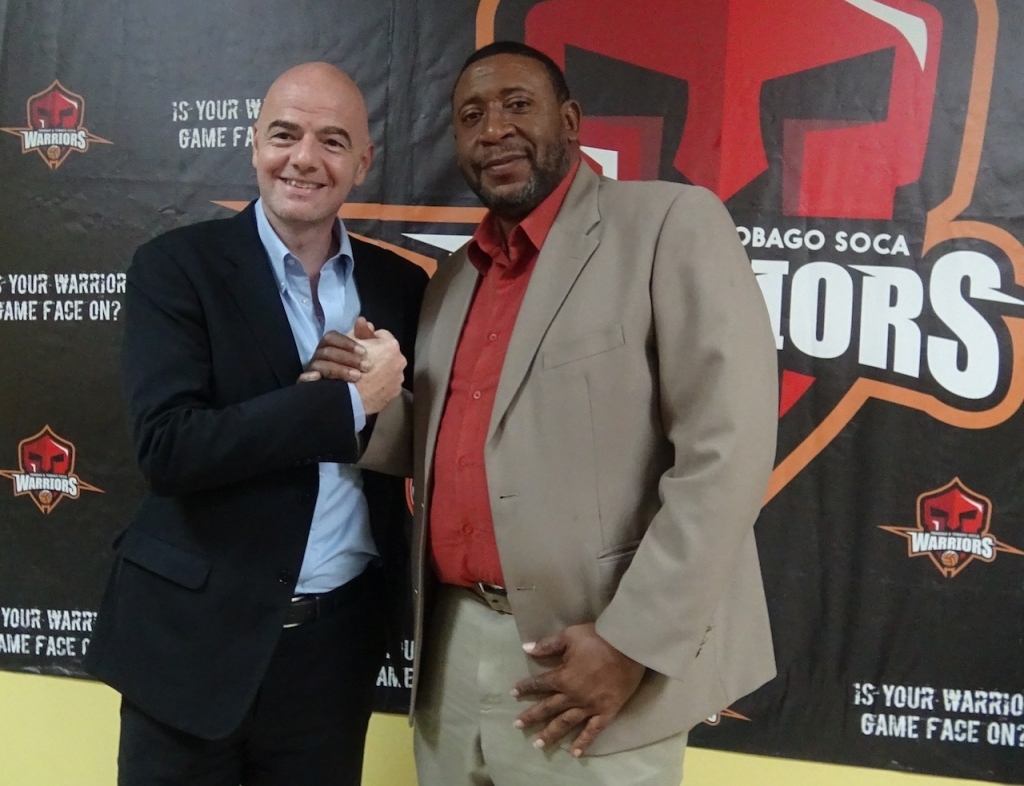 Trinidad and Tobago Football Association (TTFA) president David John-Williams tried yesterday to defend the football body’s position on its treatment of non-compliant members as well as the validity of his own election through a reading of selective emails and, arguably, a re-wording of the constitution.

Most notably, John-Williams told the media conference that 33 of the TTFA’s 49 delegates—who are excluded from the 25 November AGM at present—will be allowed entrance to the meeting and access to the body’s financial documents, once an extraordinary general meeting agrees to extend their deadline for compliance, which was on 30 September.

Even if the deadline is extended, though, the members would still be non-compliant. So is it constitutional to differentiate between the two types of members?

The term “compliant member” does not exist in the TTFA Constitution and John-Williams’ insistence on suggesting otherwise did cause some confusion.

Wired868: “How many members were invited [to the 29 November AGM] and given a schedule of the AGM with the [financial] documents and so on?”

John-Williams: “Only the compliant members.”

Wired868: “When you answered the question [from another reporter], you said all members were invited.”

John-Williams: “All members were invited, Mr Liburd. I answered the question.”

Wired868: “According to the constitution, all members should get information on the agenda for the meeting and the financial documents and so on. Correct?”

John-Williams, through an armful of printed emails, suggested that the TTFA had done all in its power to help members become compliant. He pointed to the 12 July 2015 passing of the TTFA Constitution, which carried a transitory clause requiring all members to meet 13 criteria within 18 months or risk losing their membership.

The transitory period expired on 12 January 2017.

Notably, by John-Williams’ own timeline, his administration’s first communication with its membership on the matter of compliance came on 23 February 2017—some five weeks after more than two-thirds of the TTFA’s delegates had lost their membership, according to the clause insisted upon by FIFA.

“As of 12 January, the 18-month grace period established for compliance has ended,” stated TTFA general secretary Justin Latapy-George, in an email to the Membership. “In an effort to establish Members that have achieved compliance, you are kindly asked to resubmit declarations consistent with article 10.2 of the TTFA constitution on or before the end of the work day of 10 March 2017.”

The new deadline was in 14 days’ time. Since then, the delegates missed a second deadline on 30 September 2017 and failed to manage a quorum for an extraordinary general meeting called specifically to deal with the issue.

John-Williams confirmed that the TTFA did not hold a workshop or otherwise try to give its membership any guidance before the initial FIFA-approved deadline.

“You go and read the 13 items that are required to be compliant,” said John-Williams. “If the average schoolboy cannot do 12 of those 13 items, we are in big trouble in our football.”

TTFA board member Wayne Cunningham, who was again doubling as press officer, backed his President.

Significantly, in November 2015,  despite having had four months to get its house in order, the Eastern Football Association was non-compliant; the EFA president at that time was Cunningham.

Cunningham’s EFA was not the only non-compliant Member at the time either. The electoral committee, headed by current SPORTT chairman Dinanath Ramnarine, admitted at the time that it had failed to get the membership compliant in the four months allowed for doing so prior to the election.

Arguably, the cloudiness on the issue of compliance from all sides can be traced back to Ramnarine’s insistence that non-compliant members be allowed to vote at the 29 November 2015 TTFA election. And members cast their ballots, elected John-Williams as president and—for the most part—went home and forgot all about the compliance matter.

And the John-Williams-led administration, according to the president, did not officially raise the issue again until after the deadline.

Of course, the legitimacy of the 29 November election has been another bone of contention. Wired868 pointed out in a previous article that a significant portion of the electorate were ineligible to vote but did so anyway.

“Dinanath Ramnarine gave a concession to have non-compliant Members vote in the election of 29 November,” said Browne last week. “I have not seen in the minutes any motion moved to have Ramnarine’s concession accepted. If it was not in there, non-compliant people would not have been allowed to vote and the election is illegal.

“If it was in there that compliance period ended on [12] January [and] all meetings thereafter must be illegal. It is check and mate; you decide which one it is.”

John-Williams read Ramnarine’s email  dated 5 November 2015 which, he claimed, suggested that there was no problem with the legality of his election as TTFA president.

John-Williams’ present view of the election is markedly different from the one he held, two years ago, when he used air quotes to refer to the transitory clause.

“I also take note of the ‘grace period’ of 18 months being granted to member bodies to get their ‘house in order’,”  John-Williams stated on 29 October 2015, “thus possibly allowing them to be eligible to vote in the elections is of concern to us.”

And even after Ramnarine’s message to the membership—which, yesterday, he suggested was the final word on the affair—John-Williams continued to exchange correspondence on the issue of the legality of the election.

He was not the only one either. TTFA vice-president Krishna Kuarsingh said Ramnarine’s letter carried no authority, was inaccurate and was a serious misrepresentation of FIFA’s position about members who were not compliant.

“As stated in the transitory provisions of the new Constitution, the TTFA members not complying with article 10.2 will not be allowed to participate in the elections.”

And, also at odds with John-Williams’ claim about the build-up to his election, five executive members wrote to FIFA on 16 November and claimed that the entire electoral process was in “disarray” owing to the compliance issue. Among the executive members that signed the 16 November 2015 missive to FIFA was Richard Quan Chan, who was also head of the Southern Football Association (SFA), which nominated John-Williams to run for president in the first place.

It is debatable, therefore, whether John-Williams convincingly put to bed any questions about the legitimacy of his election.

As regards the current issue of compliance, there is little doubt that FIFA indeed intended for members who did not satisfy the necessary criteria to be stripped of their standing. However, there is no article in the TTFA Constitution that allows members to lose their rights or status unless so decided by the general meeting.

And the stalemate, arguably, is not helped by the John-Williams-led Administratio’s treating all 49 delegates as members on one day and then acknowledging just 16 on the next—based on changes to the TTFA’s own imposed deadlines rather than whether they were compliant or not at that point.

Wired868 asked whether the TTFA tried to assist members by approaching the Institute of Chartered Accountants of Trinidad and Tobago (ICATT) on their behalf and seeking group rates or even providing members with a list of available licensed accountants.

(ICATT confirmed it had not been formally approached by the TTFA and that the body would have arranged discounts if requested).

John-Williams said it was not their responsibility to do so. However, the TTFA president and board member/press officer suggested that they had offered auditing advice.

Cunningham: “The TTFA extended services to all members at one of those meetings to help them with [auditing financial statements]. If you ask any member, they will tell you.”

John-Williams: “They were told to come to the TTFA where we would try and pool our resources to get a cheaper source.”

Browne and Look Loy denied that there had been any offer from the football body to help with audited statements with the latter official suggesting that John-Williams remembered the reverse of what had actually happened.

“In the discussion, Osmond Downer, Selby [Browne] and myself proposed two different approaches to this issue [of non-compliance],” Look Loy told Wired868. “One, that an extraordinary meeting be called, which was eventually called two weeks later. And, secondly, we called on the TTFA to organise some kind of mechanism where non-compliant members could be assisted with getting financial audited statements because Central FC and Cunupia said, at that meeting, they couldn’t pay for audited statements, which is why they didn’t have [them].

“So we asked if, through Deloitte—which is the TTFA’s auditor—or any other auditing firms, they could arrange for members to be pooled to get a group rate. That suggestion came from the floor and not the head table. And Wayne Cunningham was not at that meeting. It was John-Williams and Latapy from officialdom.”

Further, Look Loy claimed that, apart from the fact John-Williams was not the originator of the idea to help members with audited statements, the football president also failed to commit to it.

“The response [from John-Williams] was we will see what happens,” said the TTSL president. “There was no firm commitment to do anything. So for them to say they made this offer [to the members] and we refused it is an outright fabrication; in other words, it is a lie.

“Which body in this position would refuse such an offer? That makes no sense.”

Almost certainly, the remaining 43 non-compliant delegates interested in attending the 25 November AGM will be able to do so anyway by virtue of voting for an extension to the deadline in the extraordinary general meeting scheduled to be held an hour before the AGM at the same National Cycling Centre venue in Couva.

Not that the members will necessarily see this option as a concession or olive branch by the John-Williams-led board.

“The TTFA president and/or Board of Directors has no authority to [ban] any member from the AGM for non-compliance,” said Browne.

The TTFA can clear up the volatile issue by helping arrange and/or fund audited statements for its non-compliant members, who comprise nearly 70 percent of the membership and, in many cases, are amateur bodies that operate without a financial arm and no source of income other than club subscriptions.

For now, John-Williams and Cunningham say they have no responsibility to offer any more assistance other than point to the relevant deadlines.