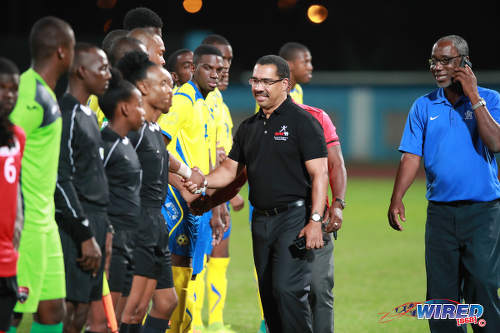 EWING DAVIS, first vice-president of the TT Football Association (TTFA), said he was unaware if any unconstitutional decision was made in a recent TTFA meeting.

According to an e-mail to the TTFA stakeholders sent by Michael Awai, director of football at Pro League club North East Stars, “I have had the opportunity to review the minutes of the reconvened AGM (Annual General Meeting) of the TTFA of 23rd December 2018 held at the National Cycling Velodrome in Balmain, Couva. I wish to point you to several items which will reveal that certain actions and decisions taken at that meeting were ultra-vires and unconstitutional.”

Davis, who chaired the meeting, said on Tuesday that he was late in his attendance and was not sure of all the decisions which were made during the day.

He added, “As chairman of a meeting, the general secretary (did) the roll call and informed me whether he has a quorum or not.”

Then TTFA general secretary Justin Latapy-George was replaced by Camara David on March 1.

“I got in to that meeting late,” said Davis. “(TT Football Referees Association vice-president Osmond) Downer had called that meeting to order and I was advised there was a quorum and I went about it.”

According to a Newsday report on March 4, Awai said he was misrepresented in a recent newspaper article, which quoted him as saying the appointments of TT Super League president Keith Look Loy and ex-TT men’s team manager Joseph Sam Phillip as members of the TTFA board of directors were done illegally.

Phillip, who has threatened to take legal action against Awai, said recently, “(Awai) is saying that it’s unconstitutional but as far as I’m aware the TTFA, for which I once served, I know (don’t) indulge themselves in anything unconstitutional. If that is so, then I’m eternally disappointed in the TTFA.

“I’m asking the TTFA and the general membership to state their position on this matter where this man is alleging that (they) had two members that (were) unconstitutionally installed. If that is so, therefore all the meetings that Mr Look Loy and myself would have attended or any decisions made while we were there would be deemed null and void.”