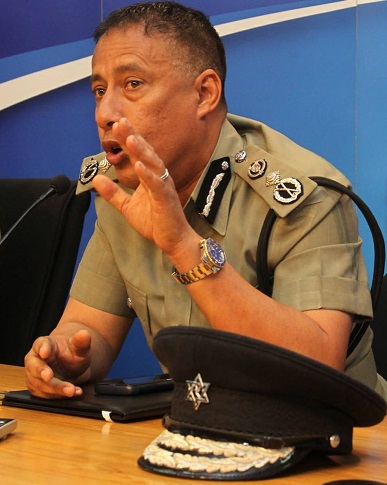 LISTEN TO THE MEMBERS

United TTFA headed by William Wallace is aiming to stop tomorrow’s scheduled Emergency General Meeting of the Trinidad and Tobago Football Association. But Commissioner of Police Gary Griffith is calling for what he describes as “good sense” to prevail.

Today, there is scheduled to be a hearing over the injunction filed by United TTFA to stop the EGM being conducted under the direction of the FIFA-appointed Normalisation Committee. The meeting was set to take place just a day before the September 16 deadline established by the world governing body for Wallace and his executive to withdraw their challenge of the Normalisation Committee in the High Court.

In a statement yesterday, however, Commissioner Griffith said: “At a time when we are on the brink of possibly being blacklisted and banned from all International football as well as loss of all funding by FIFA, due to the decision by United TTFA to proceed via the local court in the present impasse, as I pleaded weeks ago, what is needed is not confrontation and battles in court, but dialogue and communication.”

And in particular, the CoP focused on the proposed EGM.

Saying he was pleased to hear of a “meeting with all 46 clubs to decide the direction and decision in this issue, which can make or break our football,” CoP Griffith added: “The administrators of football, be it the United TTFA, Normalisation Committee or whoever, simply represent them (membership) at boardroom meetings, and make decisions based on what they direct, and hence their views, via these delegates, should be the catalyst towards the direction of where this goes...United TTFA, Normalisation Committee or whoever, should be doing nothing other than adhere to the directive of these major stakeholders.”

He said he was disappointed to hear of the injunction, “to prevent these same members from having their views and voices heard via the planned Extraordinary General Meeting [EGM] on 15th September 2020, based on the premise that the Normalisation Committee should not have the authority to call such a meeting.”

Griffith declared: “We must serve to lead, and respect the wishes of the membership whereby over 30 of the 47 delegates have asked for such a meeting. To prevent calling such a meeting, or to delay it, can cause some to perceive that it is not the desire of those in authority to listen or adhere to the views of who they represent, and also a perception of a deliberate delay to ensure that 16th September passes...and the decision made to have us possibly suspended.”

The FIFA Congress is scheduled for Friday.