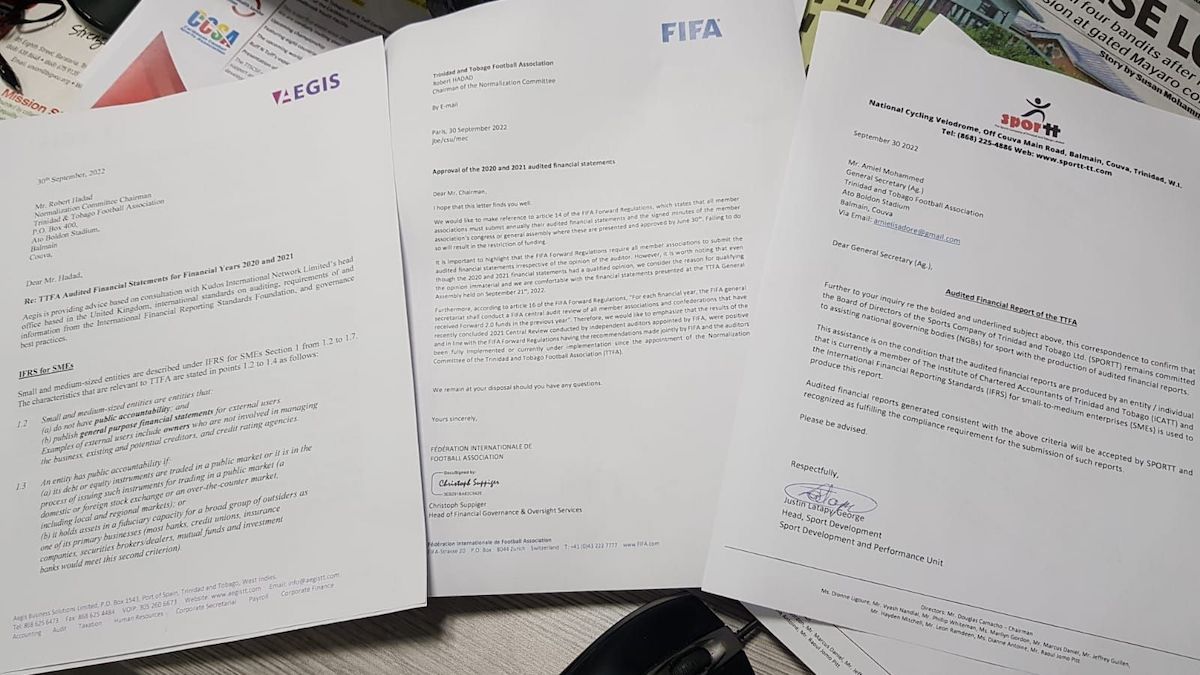 Three days before the T&T Football Association (TTFA) holds an Emergency General Meeting (EGM) to treat with issues highlighted by its members in its audited financial statement for 2020/2021, comes confirmation from the sport's world governing body - FIFA that it is satisfied with the statement.

At an annual general meeting (AGM) on September 21 at the controversial Home of Football in Balmain, Couva, Keiron Edwards, president of the Eastern Football Association (EFA) received tremendous support in delaying the approval of the audited financials based on five main reasons, such as Erroneous Reporting; Unauthorised Removal of Fixed Assets from the Association; Presentation of Financial Statement in an environment of bankruptcy and insolvency proceedings; Neglected Disclosure Notes to the Financial Statements; and Increased Debt under the Normalisation Committee, which all stemmed from the audited report of the TTFA auditor AEGIS Solutions.

In the report, AEGIS confirmed that they were unable to determine whether any adjustments might have been found necessary in respect of recorded and unrecorded plant and equipment.

Edwards said because of this, figures quoted in the financial statement could not be validated and convinced members at the September 21 AGM to have the audited financials dealt with at an EGM 17 days after that meeting, which is carded for Saturday.

However, a letter from FIFA's Head of Financial Governance & Oversight Services Christopher Suppiger on September 30 made it clear that failure to present audited financials by June 30 will result in the restriction of funding.

The letter also stated: "According to article 16 of the FIFA Forward Regulations, 'For each financial year, the FIFA general secretariat shall conduct a FIFA central audit review of all member associations and confederations that have received Forward 2.0 funds in the previous year'. Therefore, we would like to emphasize that the results of the recently concluded 2021 Central Review conducted by independent auditors appointed by FIFA, were positive and in line with the FIFA Forward Regulations, having the recommendations made jointly by FIFA and the auditors been fully implemented or currently under implementation since the appointment of the Normalisation Committee of the T&T Football Association (TTFA).

"We would like to make reference to Article 14 of the FIFA Forward Regulations, which states that all member associations must submit annually their audited financial statements and the signed minutes of the member association’s congress or general assembly where these are presented and approved by June 30th. Failing to do so will result in the restriction of funding."

Yesterday, Edwards refused to comment on the letter, saying he did not have the document from FIFA before him and would respond accordingly.

Coincidentally, Head of Sport Development at the Sports Company of T&T Justin Latapy-George, in a letter dated September 30, responded to an inquiry by TTFA general secretary Amiel Mohammed about its audited report.

According to Latapy-George: "Further to your inquiry re the bolded and underlined subject above, this correspondence is to confirm that the Board of Directors of the Sports Company of T&T Ltd (SPORTT) remains committed to assisting national governing bodies (NGBs) for sport with the production of audited financial reports.

"This assistance is on the condition that the audited financial reports are produced by an entity/individual that is currently a member of the Institute of Chartered Accountants of T&T (ICATT) and the International Financial Reporting Standards (IFRS) for small-to-medium enterprises (SMEs) is used to produce this report.

"Audited financial reports generated consistent with the above criteria will be accepted by SPORTT and recognised as fulfilling the compliance requirement for the submission of such reports."

AEGIS coincidentally also submitted a four-page document on September 30 to confirm that the audited financial statement presented on September 21, was done according to international standards.