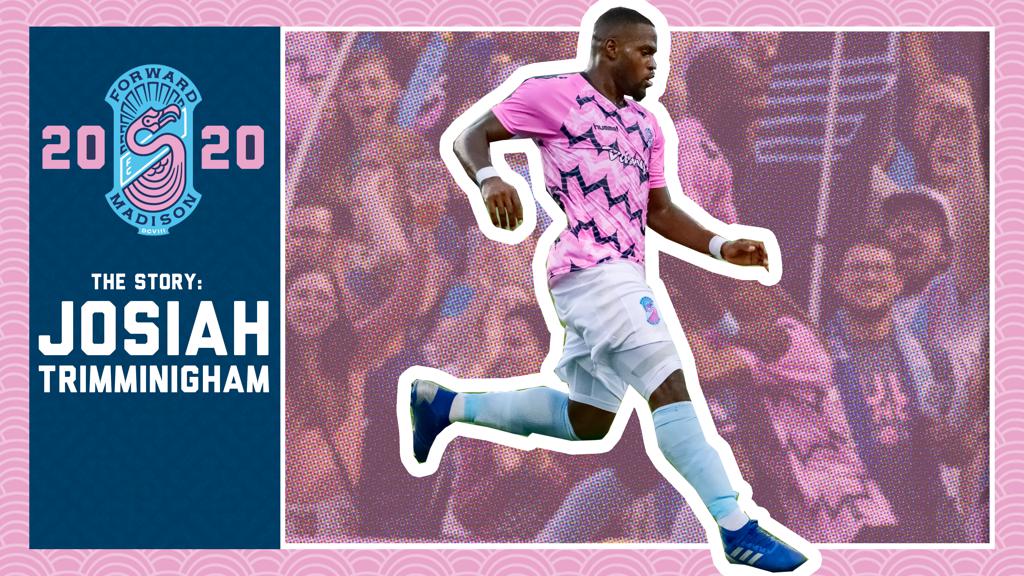 On June 25, 2019, Josiah Trimmingham put on a Forward Madison jersey for the first time.

He wasn’t officially on the team, but Trimmingham, who was playing with FC Miami City in USL League Two, had worked with his agent to set up a one-week trial with the Flamingos. It just so happened that the week Trimmingham arrived coincided with one of Forward Madison’s biggest games of the season: A marquee exhibition against Major League Soccer’s Minnesota United FC.

It may have been fate, then, that two of Forward’s regular center backs would not feature. Wyatt Omsberg, on loan from Minnesota, was set to suit up for his parent club. And team captain Connor Tobin, dressed in street clothes, was taking a well-deserved rest after a hectic first couple months of the season.

In need of a defender, head coach Daryl Shore turned to Trimmingham. This is the story of how a 45-minute cameo led to a year-long contract.

Trimmingham in Trinidad and Tobago

Josiah Trimmingham’s soccer career has been on an upwards trajectory since he started playing at 10 years old.

Trimmingham, who grew up in San Juan, Trinidad, ran track and played cricket when he was young. Still, soccer was always his strong point. Trimmingham began playing for his hometown team in the TT Pro League in 2014, when he was still only 17, and found that he could compete with much more experienced players.

“[You have to] work your way up,” Trimmingham said. “From being seen, being recognized, to being put into the national pool. Then you have to fight off all your friends - because you all are friends - to get that cap.”

At some point, there was only one more rung to climb. In 2017, Trimmingham was called in to the senior national team for FIFA World Cup qualifiers against Mexico and the United States. Although he didn’t see the field in either of those games, Trimmingham was on the bench when Trinidad and Tobago beat the U.S. 2-1 in October, eliminating the Americans from World Cup contention for the first time since 1986.

Despite his country’s historic victory, though, Trimmingham’s big moment was yet to come.

A month later, on Nov. 14, he finally got his game. Trimmingham started in a friendly match against Guyana, his first-ever official appearance for the Trinidad and Tobago National Team.

“It was a good game, I had good plays, big actions,” Trimmingham remembered. “Representing your country is really the best part of it. After all the training, all the hard work, all the dedication, it’s representing, and that’s where the honor really comes in.”

With an ever-growing pedigree and a national team cap to boot, Trimmingham started to survey his options abroad. In 2018, he participated in Major League Soccer’s Carribean Combine. A year later, he moved to FC Miami City in USL League Two, making nine appearances during the team’s summer season.

It was during this time that Trimmingham’s agent, Cris Barbosa, made contact with Daryl Shore. Barbosa sent Shore a few highlight videos of his client, and it was enough to catch the Forward Madison manager’s attention.

Trimmingham arrived in Madison on trial, had several days to integrate with the team, and suddenly, was coming on to play the second half in front of a club-record crowd of 4,821. The occasion could hardly have been more meaningful.

“It was the second-biggest game of my life after playing for the national team,” Trimmingham said. “The atmosphere was really great. I felt like I was really back, because I was with the national team in [World Cup qualifiers] versus Mexico and the United States. When we went to Mexico, their fanbase was around 50,000 people. So getting the same taste, with less people but that same energy from Forward Madison fans, was amazing.”

Playing as a right-sided center back, Trimmingham did his best to make an impact. Matched up against forward Mason Toye, Trimmingham used his physicality to get into the game, and one point heading a ball around 30 yards up the pitch.

“Playing against an MLS team, it’s competitive all around the park,” Trimmingham said. Getting up over their big striker (Toye), making that good header, making good passes, it was really enjoyable.”

Trimmingham’s performance against Minnesota impressed Shore, but there would have been challenges in bringing him onto the team mid-way through the season. For starters, Forward Madison had already filled its limited number of international spots, so Trimmingham had to bide his time.

Forward’s offseason brought changes, though, including an open international spot as well as a hole to fill at center back. In the early months of 2020, with preseason training on the horizon, the Flamingos offered Trimmingham the chance to turn his one-week trial into a full season.

Trimmingham accepted, and on February 13, the club made the move official.

“[The Minnesota game] helped with my decision of accepting the offer to come here,” Trimmingham said. “The fans are the 12th man of the team, and without the fans, the team doesn’t have that drive. I was able to really appreciate the Forward Madison fans even before signing my contract.”

Forward Madison fans surely wouldn’t have known it when they left Breese Stevens Field last June, but they had just helped convince a future Flamingo to sign a contract. Now that the fans know his name, Trimmingham’s next task is to make sure they remember it.