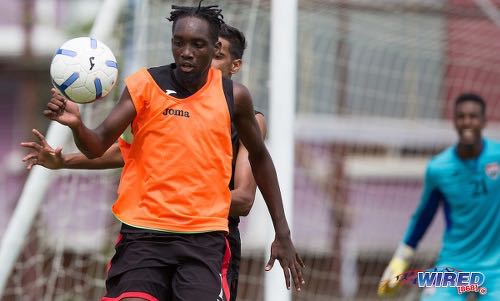 The 20-year old player left last week in search of his life-long dream to be a professional footballer, Club Sando's owner and managing director Eddison Deane has said.

He told Guardian Media Sports on Monday, that the young player has been a sought-after player by clubs and football agents across the world for the past months. However, the club's partnership with Three-D, a United States and Canadian football agency, has enabled him the opportunity to pick the best choice, in terms of club stability, the potential for growth and player-satisfaction.

Deane said he is unable to say how long the player's stay at the Portuguese club will be, as he was snapped up and sent to Portugal on a one-way ticket. "This I imagine means that he will be there for as long as the club wants him to stay, or he will not come back. He is an excellent little player whom I feel confident about abroad," Deane said.

Joseph is a former national Under-20 player under Russell Latapy and was also a member of the Senior team training squad under Terry Fenwick. He was also a standout player at Moruga Composite in the Secondary Schools Football League (SSFL) about three years ago before he moved to North East Stars in the T&T Pro League.

He was later snapped up by Club Sando where he has worked under Angus Eve, who Deane considers to be one of the country's best youth coaches. Deane is a believer in developing young players and called on all clubs to focus on the development of the young players during our suspension from international football by the sport's world governing body- FIFA.

Deane, a Naparima College old boy, said he is such a believer in development that he works with his alma mater to produced complete players for club and country. He explained that being deep into the school system, he places more emphasis on youth development, saying if clubs follow this approach, the country will be well served and ready when the suspension is lifted, whenever that will be.

"If we focus on the senior players now, what will happen is that they will be too old when the FIFA suspension is up and they will not be able to represent the country at World Cup Qualifiers or other qualifiers, therefore, put that time towards the youths, then they will be ready in time for the qualifiers."

FC Maia never competed in the top division, but had a nine-year spell in the second level from 1997 to 2006. In its first season in the category, it faced Porto in the Taça de Portugal, losing 4–5 at home in the round of 16 after eliminating Moreirense and Feirense in the previous rounds.

At the end of the 2006–07 season, Maia was relegated for the second consecutive time, thus falling into the fourth division. It folded in 2008 due to serious financial problems, starting competing again the following year, in the second regional division in Porto, and immediately achieved promotion.