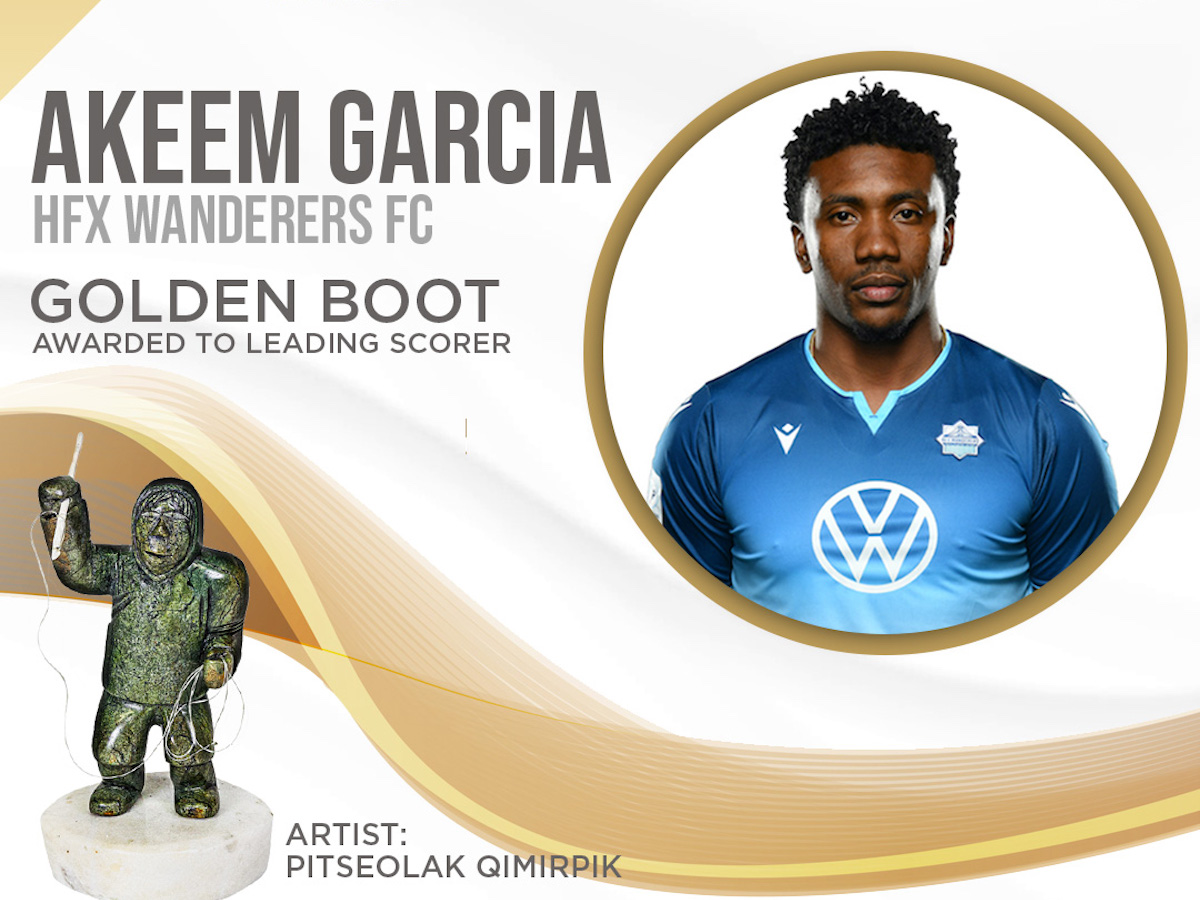 This one wasn’t a surprise.

Akeem Garcia was officially crowned the 2020 Golden Boot award winner during the CPL Awards ceremony on Thursday night, as the HFX Wanderers FC forward was celebrated for his six goals in 10 matches at The Island Games in PEI.

The 24-year-old forward won out in a close scoring race, beating runners-up Marco Bustos of Pacific FC (five goals) and his HFX Wanderers teammate João Morelli (four goals). Garcia’s impressive attacking displays in 2020 also earned him a nomination for the CPL’s Player of the Year award, alongside Bustos and Kyle Bekker of Forge FC.

The 2019 Golden Boot winner was Tristan Borges of Forge, whose 13 goals helped spur his side to the first CPL championship.

Garcia’s six-goal run at The Island Games helped the Wanderers advance all the way to the 2020 CPL Final, with key goals in both the first and second rounds against eventual champions Forge paving the way for the club’s success.

“With the players we got this year I knew that I would be given a lot of service, it’s just up to me to put it in the back of the net, which I successfully did this year,” Garcia told CanPL.ca. “Midway in the season I was like, ‘Hey, I could go on and win this thing,’ when I started to analyze and see what was going on.”

Although he broke out as a goalscorer in 2020, Garcia’s offensive ability was not a surprise this year; he scored seven goals in 24 games in 2019, leading the Wanderers and finishing seventh overall in the CPL. This year, he credits a tactical change from coach Stephen Hart for allowing him to be the primary scoring threat.

“This year coach allowed me to focus on one position; he only played me forward this year and not on the wings,” Garcia explained. “That gave me a lot of confidence knowing my role, and what I can do best to help the team.”

Hart had kind words for his star forward, whom he’s known for years from their time together with the Trinidad and Tobago national team.

“Akeem, from when I knew him coming up in Trinidad and Tobago, always had a hunger, was always humble, willing to learn, and then also willing to do what was necessary to advance himself in the game,” Hart told CanPL.ca. “Once you have that desire and that passion you can go very, very far. I’m not surprised because he’s continually learning and continually striving, and I admire that in him.”

For winning the Golden Boot award, Garcia was presented with the Hunter trophy, a traditional Inuit sculpture from Nunavut, designed by local carver Pitseolak Qimirpik.