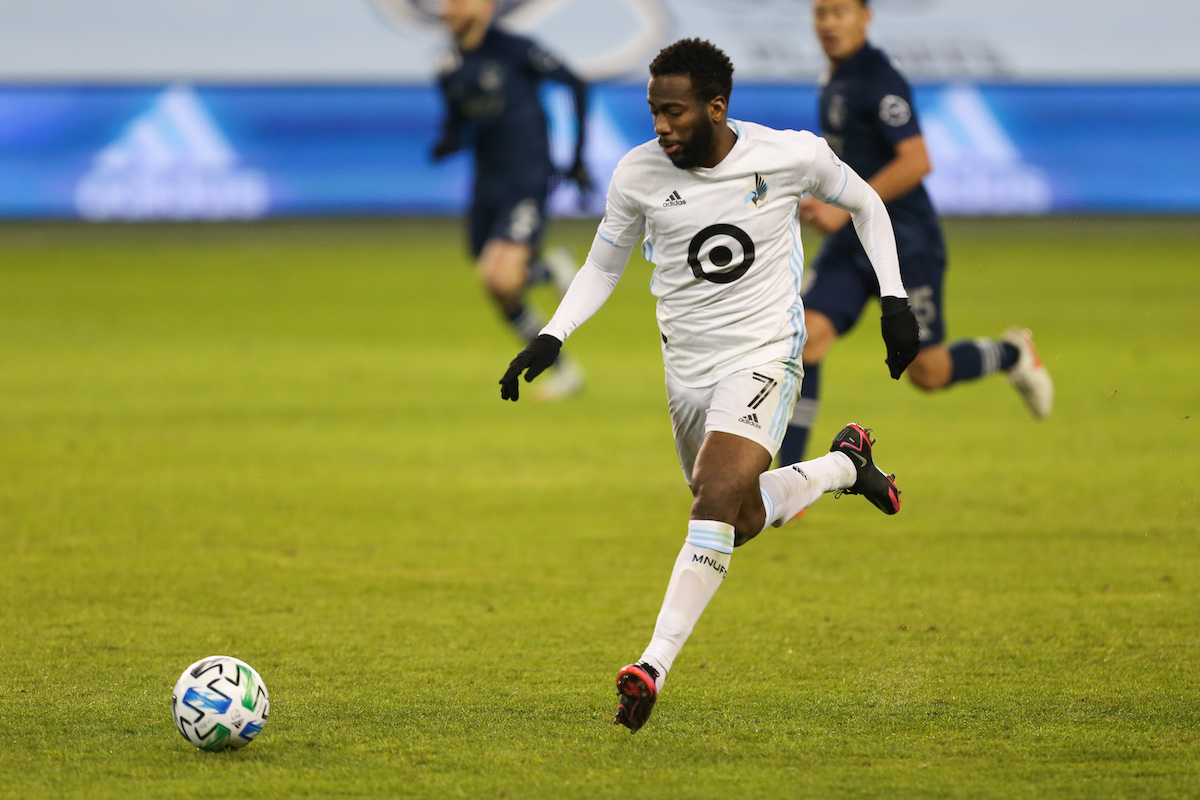 A brace from Molino in the opening half of Thursday’s conference semi-final spearheaded Minnesota’s 3-0 triumph over top seed Sporting Kansas City.

Seattle are one win away from making their fourth final in the last five years while Minnesota are into their first Western Conference final in only their fourth year as an MLS club. In 2019, Minnesota exited the MLS Playoffs in round one.

Molino is a contender for the MLS Playoffs MVP, having bagged two goals against the Colorado Rapids in a similar 3-0 round one rout two weeks ago. The 30-year-old midfielder has now tallied 13 goals and four assists in 19 games this season.

National men’s coach Terry Fenwick has been closely following the pair’s competitive exploits on the US circuit and is eager to witness Monday’s conference final. He dubbed the pair “a breath of fresh air” to climax an unsettling year for T&T football.

“After all of the issues regarding football, these two guys are flying the flag high for T&T. They alone, and without the national team, are putting T&T on the map because of their professionalism, energies and positivity moving football forward,” said Fenwick.

The English coach considers Molino and Jones role models for the younger generation of national footballers.

He is in constant contact with the pair, among other foreign-based senior nationals, via WhatsApp. Fenwick rues the fact that Molino and Jones will be going up against each other and will not be able to share the title as teammates.

He added, “The goals Molino have scored have been fantastic. They were great goals with good buildups that he was also involved in. He’s done a remarkable job and it’s absolutely a good look for him.

"It’s a shame they’re not on the same team so they can both win.”

On September 24, FIFA suspended the TT Football Association (TTFA) after ex-president William Wallace and his former executive challenged the global governing body’s decision at the local courts, instead of the Switzerland-based CAS (Court of Arbitration for Sport) to remove them, on March 17, and implement a normalisation committee, headed by Robert Hadad.

FIFA’s decision to remove the TTFA executive was due to the $50 million debt accumulated by the local body.

The suspension was lifted on November 19 after an October 23 decision by the Court of Appeal for all legal claims brought against FIFA by Wallace, former vice-presidents Clynt Taylor and Joseph Sam Phillip) to be terminated.

In a recent interview with Newsday, Molino threatened the TTFA that he would hang up his boots if the fraternity does not get its house in order before the Concacaf World Cup qualifiers in March 2021.

Because of the eight-month legal wrangling between the sports’ global governing body and TTFA, Molino said the players have suffered the most.

Arguably T&T’s most talismanic striker of this period, Molino serves as a key asset to T&T’s chances of securing qualification for both the 2022 FIFA World Cup and 2021 Concacaf Gold Cup.

Fenwick understands the player’s frustration and called on the powers that be to observe the short- and long-term repercussions of TTFA’s power struggle.

“It’s a big statement from a big player. His sentiments are right, because we all want to move the game on positively in T&T. We’re all hoping he returns to the national team.

“Football is not a corner-shop business any more. It’s a huge conglomerate. World football is huge today. We’ve got to take it seriously.

“Unfortunately the warring factions on the ground here in T&T are not seeing it for the magnitude of how the game’s being played around the world and how it’s affecting players,” Fenwick said.

The national coach acknowledged T&T football is going through a difficult time. He believes the squad will approach the coming competitive season with enthusiasm and clear intent to return the national team to a competitive standard in Concacaf.

“We’ve come to a very difficult time in T&T football and we’re trying to move it ahead. The best we can do at the moment is take it step by step. We’re still looking at resources and finances coming from the normalisation committee and remain optimistic.”

The 30-year-old Molino, who has 13 goals, the most in one season in the MLS, made it 1-0 in the 27th minute after being played through by Reynoso, beating the Sporting backline with combination play before he calmly tucked past goalkeeper Tim Melia.

The quality of Molino, who is out of contract at the end of the season, and Reynoso then surfaced when Minnesota opened a 2-0 lead in the 35th minute.

The former Boca Juniors midfielder clipped a left-footed pass to the Carenage-born T&T international, who volleyed home a right-footed shot after tracking the pass over his shoulder and toeing it inside the far post.

Sporting wasn’t without chances, especially in the opening stages when Johnny Russell chipped goal-keeper St Clair in the second minute, only for centre-back Michael Boxall’s header to provide a goal-line clearance.

The 23-year-old St Clair also pawed away a near-range header from Roberto Puncec in the 15th minute, keeping the ball by mere inches to deny Russell on a breakaway in the 14th minute.

Only a member of the MLS League for the past four years, Minnesota is now one game away from competing for the MLS Cup, but standing in their way is defending champion, Seattle Sounders, the club of Molino’s close friend and fellow T&T international Joevin Jones, who will be aiming for a fourth final in five years.

The Western Conference final is set for Monday while Columbus Crew and New England Revolution meet in the Eastern Conference decider on Sunday, with the Audi Cup finals set for next Saturday.

Molino is the undisputed playoffs MVP.
By Steve Zakuani (MLSSOCCER.COM)

The first half of this game was one of the weirdest 3-0 games I’ve ever seen. It’s not that Minnesota didn’t deserve it, they did — it’s that Sporting had enough chances to put the game to bed long before the Loons got going. The first 25 minutes of this game left me wondering how on earth Minnesota were still in the game. And then Molino woke up and continued to make his case for MLS Playoffs MVP, and just like that, Minnesota punched their ticket to the Western Conference Final.

Molino is a player I’ve always liked but at times he has flattered to deceive. The talent is there, but he can be great one game and then anonymous the next. For one reason or another, he’s found a zone right now that very few athletes reach. He’s in a place where everything he tries is coming of, things that take years to perfect look effortless for him, and he is putting the ball in the back of the next with an efficiency that any fox in the box would be proud of.

He’s been the best player in the playoffs — bar none. Minnesota as a whole look incredibly deadly going forward and it’s not just Molino, it’s their entire attacking quartet of Robin Lod, Ethan Finlay, Reynoso and of course Molino. I absolutely love the way they get out on the break — they attack with pace and purpose and look like they have a clear plan for what they want to do. Sporting didn’t help themselves defensively, but this was more about how well Minnesota took their chances when they arrived.

The first goal was exceptional. The quick passing and off the ball movement was top notch as was the timing of both Molino’s run and the pass from the ever-impressive Reynoso. That was Adrian Heath’s team at their attacking best — fast, precise, purposeful and deadly.

The Reynoso-Molino combination is eerily similar to the Lodeiro-Morris one that has worked wonders for the Sounders. You can know what they want to do, but it’s very difficult, if not outright impossible to stop it when it’s in full flow. They are not quite at the level of the Sounders duo yet because those two have produced performances that have translated into silverware. But, given time, and the current trajectory they’re on, this is a duo that can dominate for a while.

They are the perfect pair because their skill sets complement each other so well. One likes to run off the ball and get in behind, while the other seemingly has eyes at the back of his head and can pick a pass through any defense. Again, very similar to the Sounders duo. Reynoso has been a revelation. I judge players based on how good they make those around them and he is top-notch when it comes to that. Molino is a similar player to what I was: good on the dribble, can go left or right, but he is more than just a winger — he is goal dangerous and also able to come inside and play-make at times. There aren’t many tandems I’d take over Molino and Reynoso right now, they are absolutely flying.