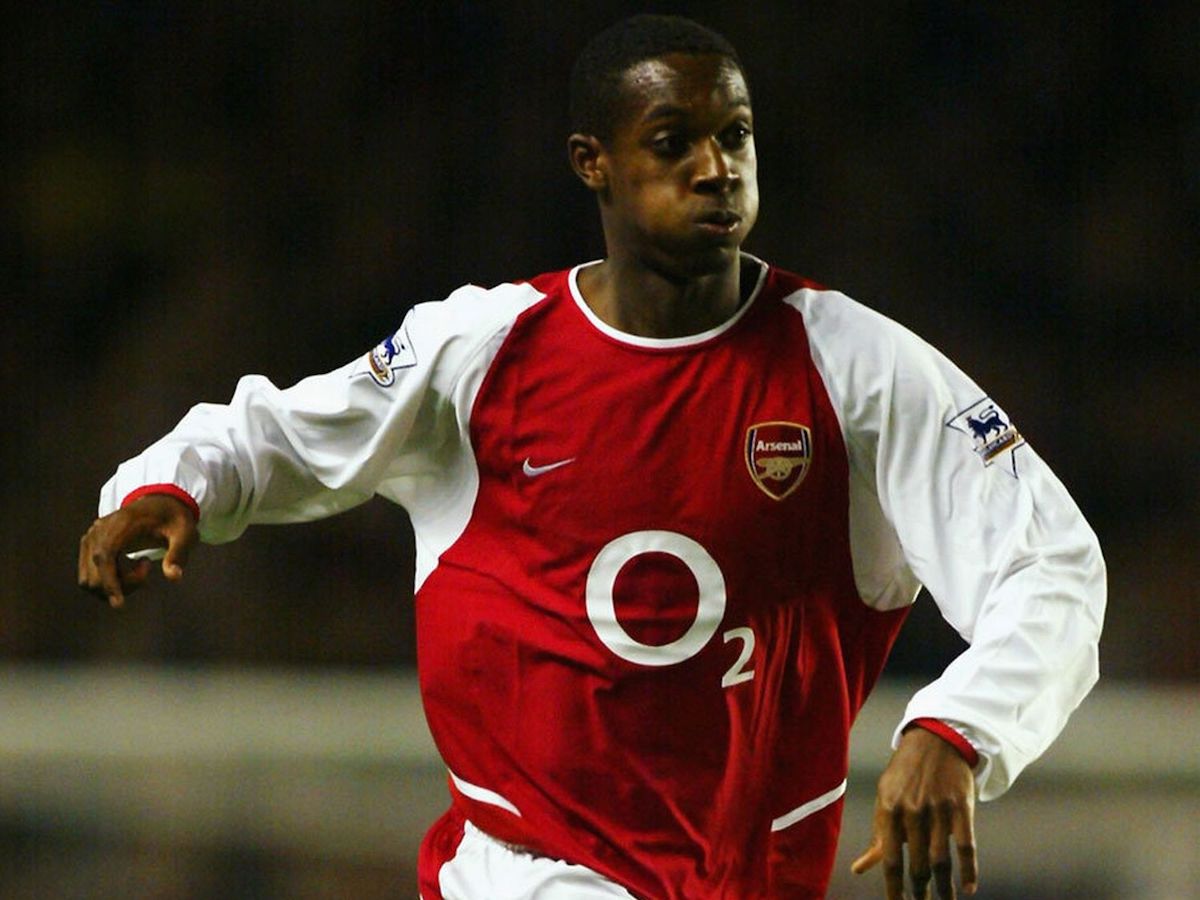 Two first half hattricks from Jermaine Pennant and Robert Pires, leading Southampton 6-1 and the clock strikes to the 89th minute of Southampton’s miserable visit to Highbury in May of 2003. The Arsenal faithful arise to applaud the efforts of hattrick hero Pennant as he leaves the field of play to be replaced by a young right back named Justin Hoyte.

Following 368 club appearances resulting in a Premier League and FA Cup, the Trinidad and Tobago international sat down to reflect upon an exciting career, specifically the part at Arsene Wenger’s invincible Arsenal. A boyhood Arsenal fan himself, Hoyte describes making his Arsenal debut as an “amazing experience”

“To get an appearance in that game was something you always dreamed of. That was one goal I always wanted to achieve and achieved, playing for my boyhood team. That’s just amazing, I mean I can’t think of anything better than that. Even though my dad’s a Man United fan it’s still crazy I was able to achieve my goal to play for Arsenal”.

Hoyte speaks many times throughout about his love for Arsenal and he says that dates right back to his early childhood.

“I remember me and my best mate Jerome we got on the train and went down to Highbury and we were following the team bus with our flags, scarves and Arsenal shirts. My mum used to live on the same road as Highbury and when Arsenal used to win things, go on the bus and parade around Islington, I used to be one of the fans chasing after the bus.”

Over the years, Arsenal have seen promoting youth as one of their priorities and their Academy as a key asset to the football club. Just a few to mention include Cesc Fabregas, Jack Wilshere and more recently, Bukayo Saka and Emile Smith-Rowe. More specifically however, surrounding his debut and the build up to it, Hoyte says he doesn’t remember much about the actual tie but more the pre match and anticipation.

“To be honest I don’t remember much of it I just remember being on the bus with some of the players- Ashley Cole, Jermaine Pennant and just going in with them, talking to them about the experience, going up the marble stairs. I remember trying to find my dad in the crowd and he said he lost his watch jumping up when I actually got on but it was great, that experience will stay with me forever.”

Arsenal football club have been the home of some iconic players over the years, the likes of Thierry Henry, Patrick Viera and Dennis Bergkamp starred for the Gunners. Hoyte was an up and coming player during the invincible season as his debut only took place the campaign just prior to the unbeaten glory.

Hoyte was within this environment daily, despite only making one Premier League appearance and two league cup appearances that campaign, the right back was training with the first team.

“It was the hardest time for me as a player to break into that team, you see what these players have achieved, you see what they have done in the game, after that, you see what they’ve done for Arsenal, the way they changed Arsenal. It’s so hard to replace them, even if you get one game in that team, you know if the other player is fit then he’s going to play. So to replace a player like Lauren or to even knock him off his pedestal, it’s the hardest thing possible. So for me it was to learn from them day to day in training, take little bits from them, learn their personality and what they do and learn that winning mentality”.

With all the stars in and around the training ground, Hoyte feels some regret that he didn’t stake more of a claim and push for his place in that team. With world class competition in front of him however, that wasn’t the easiest of tasks.

“It was hard for me to break in and to bring out my own personality, because I’m looking at those players and for me still as a huge Arsenal fan like flipping hell I’m here with Henry, Viera, Ashley Cole, Lauren and I should have been like right I’m in this team, let me stay here, I was still in awe of some of the players. But it was amazing what the players did and it was hard to knock them off.”

As a young player within the side, and such a high pressured setting, Hoyte pays tribute to two players in particular that he took inspiration from. First, the Invincible captain and current Crystal Palace manager Patrick Viera. The Midfielder played 34,410 minutes for the north London club. Over 397 appearances scoring 32 goals and 44 assists throughout his time in the capital. Viera’s trophy record speaks for itself also winning three League titles, five FA cups, a Champions League with Inter Milan alongside the World Cup and European Championship with the French national team. Those are just a few highlights to mention in Viera’s trophy cabinet.

“He would treat you the same no matter if you were in the first team or an up and coming player, a reserve team player training with the first team or in the academy training with the first team. He really took you in and showed you how it was to be an Arsenal player. He looked after everybody, spoke the same, with respect and everyone looked up at him as he was the boss, never arrogant and his personality spoke for itself. He really looked after everybody on that training field. I really looked at that and him as a key role model. He changed the way that I approached my career really”.

Being a fullback as well as Hoyte, the other name he mentions was none other than Ashley Cole. The English Left back also had a very decorated career however a fair measure of his success came after a controversial move to London rivals Chelsea where he went on to win the lucrative Champions League trophy, a Premier League trophy, the Europa League and four FA Cups.

Cole did also taste success with Arsenal, winning Two League titles and three FA cups in N5. The left back’s move to SW however sparked fierce controversy after he came up through the Arsenal academy before moving to one of their biggest rivals. Cole was however a member of the Arsenal invincible squad and left a lasting impression on Hoyte in particular during his time there. When asked who acted as a mentor as such to him at Arsenal, one name leaves his lips without hesitation.

“Ashley Cole for me was the one person I always looked at, as I was going through the academy even as I was playing my first few games, he took me under his wing and I got to learn from him and he kind of had a similar experience to me, going out on loan before coming back to play at Arsenal on a regular basis. I didn’t reach the heights that he did but I still got to play alongside him and actually learn how he operates and how he plays the game and it was great to have him. For me he was my key role model”.

Being a young player with such talent ahead of him however, it would be a monumental challenge for anyone coming in to even get close to pushing for the first team, bearing in mind this Arsenal side were pushing for league titles at the time and fighting for all competitions, only the youngsters with the very best attitude would stand a chance.

“One of the first things I remember was Pat Rice saying to me you just need to go over and not be shy and pretend you’re not an academy kid. You need to go and show these players that you actually deserve to be here, you need to walk, train and run like them and they will take to you. If you go over like flipping hell, im with the top players here and I don’t deserve to be here, then you wont be. Go out there and put your own personal stamp on things and you be who you are then you will definitely deserve it. It’s a bit of arrogance but that is what Arsenal was at the time”.

Of course, the Invincibles cannot be mentioned without referring to the mastermind and professor behind the great achievements, Arséne Charles Ernest Wenger. Wenger was the ultimate manager, winning three League titles, Seven FA Cups and seven English Super cups with Arsenal. The Frenchman stole all the headlines in September of 2002 claiming that “It’s not impossible to go through a whole season unbeaten” before following through and guiding his side to an iconic 49 games unbeaten.

Wenger was incredibly passionate about promoting youth throughout his tenure at Arsenal, having an influence on some of the biggest Premier League stars as they came through. Cesc Fabregas, Robin Van Perise, Abou Diaby and Ashley Cole were just a few to mention from that generation of whom he gave chances to impress and express themselves at Highbury. All of these players have sung the praises of their manager through their careers and Hoyte is no exception.

“Training with Wenger, he didn’t say too much but when he spoke to you he spoke with respect, told you exactly what he wanted and he told you to play like you were playing with your friends in the park. When you play with your friends you play with freedom, excitement, joy and a smile on your face. If you take that into training or a game then you play in the same way. If you go into the game without these characteristics however, you won’t play to your best and perform.

He also bought you into the team for a reason. They’ve picked you for your qualities and if you bring that into every game and training session then you’ll go far.

It was great to have him as a mentor, as a trainer and as a coach. His attention to detail was second to none and you can see why Arsenal achieved such great things. He was a great coach for me and one person that helped me in my career.”