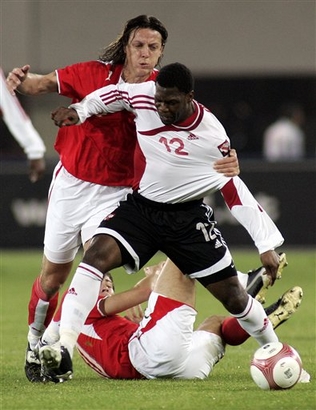 Tony Docherty watched Collin Samuel dance around watermelons on a shabby Trinidad pitch eight years ago, and knew there and then he'd be a star.

The St Johnstone No2 was a coach at Falkirk when he was tipped off about the striker from a Bairns fan working for BP on the Caribbean island.

It took a year for Samuel to finally come across to join the club after delays in getting a work permit.

But Docherty has watched the 28-year-old mature over the years at Falkirk, Dundee United and now the Perth side. And he was made-up for the Soca Warrior when he ran Rangers ragged despite their 2-1 defeat at McDiarmid Park last weekend.

Docherty said: "BP sent us over to do some soccer clinics in Trinidad but we were also tipped off about a few players by Simon Lindsay who worked for them and who was also a Falkirk fan.

"I saw him play in his home town of Manzanilla on a pitch - calling it a public park would be doing it a disservice - it was basically bumpy ground with goals at either end. We had to wait to get the cows off the pitch before we could start the classes.

"There was also a part of the pitch where water melons were being grown and the players had to avoid them.

"But Collin showed he could exhibit skills on that pitch and I thought if he could do it there then what could he do back in Scotland?

"You could see he had pace and he obviously caught the eye right away. He showed skill, pace and power.

"He was a stand-out the first time I saw him and I felt he could cause defences problems. We brought him over along with Devon Mitchell, but both failed to get work permits so we kept tabs on them.

"The first time Collin played for us was in a friendly against Dunfermline when he scored a couple of goals."

Samuel burst on to the scene when he scored a hat-trick in a 4-0 Scottish Cup win over Hearts in January 2003.

He won a move to Tannadice the following summer but failed to set the heather alight on Tayside.

Now after a stint at Toronto FC, Samuel is back in Scotland and Docherty insists he can fulfil his early promise as long as gaffer Derek McInnes shows faith in him.

Docherty said: "Sammy was outstanding against Hearts back then when it all came together, he also scored a hat-trick against Arbroath the week before.

"He was hitting his peak at that time and I have always had a strong belief in him.

"I think Collin needs people to believe in him so they can get the best out of him.

"He knows himself he has got to focus on his fitness and diet because he needs to sustain that strength and power.

"He has got everything and needs to put it all together.

"He is definitely showing signs he is maturing and the fact he has two young kids has helped.

"I do see a difference in him because he is working hard in training. If he does that and keeps himself tip-top then he has got all the skills to go far." Samuel is dreaming of a move to the Premiership and Docherty knows the player has set his sights high.

He said: "It is up to Collin where he can end up but he has seen what Jason Scotland's done.

"He gets all the support from us and if he believes in himself then who knows where it is going to take him."

Samuel is fed up hearing he has promise but admits he lost his way a bit at Tannadice.

He said: "I've been in Scotland seven years and it is a bit frustrating at times that people still talk about potential.

"When I moved to United I was a bit frustrated. Those three years didn't really go the way I wanted it to.

"Scottish football is really competitive and there are a lot of hard knocks along the way.

"It is hard going at times but I try to cope with that as best as possible.

"In the last two years, I have tried to get my name on the scoresheet as much as possible.

"At the moment I am working hard in training and playing to the best of my abilities.

"I am trying to do as well as I possibly can."

Saints winger Filipe Morais is out with a shoulder injury he picked up against Rangers last weekend. Captain Kevin Rutkiewicz is doubtful with a stomach strain while striker Steven Milne has failed to recover from an ankle knock.