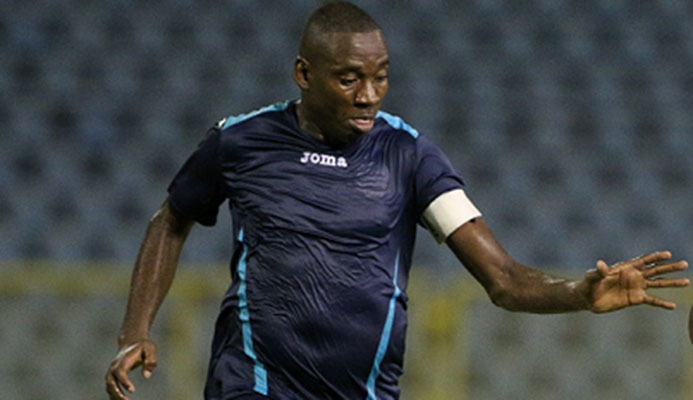 Kadeem Riley scored on either side of the break as Police FC cruised into the semi-finals of the 2016 First Citizens Cup with a 4-1 hammering of Point Fortin Civic on Monday.

Riley, featuring in attack for coach Richard Hood’s side dented by injuries, scored early and late for the Lawmen, who also had a goal each from winger Micah Lewis and utility player Christon Thomas for the quarter-final win at the Ato Boldon Stadium.

Police grabbed a 1-0 advantage in just the third minute through Riley. The lanky attacker, free inside the Civic area, was picked out by a left side Joshua Leach cross and made no mistake in beating goalkeeper Miles Goodman from point blank range.

Lewis then handed Police a 2-0 cushion on 23 minutes with a solo goal from inside the area, but Civic pulled one back three minutes from the half.

Boatswain headed in an Akeem Redhead cross at the back post to beat Police goalie Theon Browne and make it 2-1.

However Police could have gone into the half with a healthier lead had Hood’s men—sporting a new sky blue kit resembling that of the colour of England Premier League’s Manchester City home strip—made better use of an indirect free kick in the area and had referee Keilon Bacchus awarded a penalty after Leach was hacked down in the area by Civic defender Kurfi Pierre on the half hour mark.

Left full-back Dexter Alleyne also had a wonderful gift with the Civic goal and Goodman at his mercy just before the half-time whistle but failed to control a right side cross hit into the area by team captain Todd Ryan.

Police finally restored their two-goal lead in the 84th minute when Riley stabbed home another Leach cross to complete his double and put Police in the clear with a 3-1 score against a side that have not yet registered a win in all competitions this season.

Then three minutes from time, Thomas, who was denied by the upright on the hour mark, rounded off the 4-1 rout with a low finish past Goodman after latching onto a pass inside the area from substitute Kareem Freitas asPolice, who are winless in five games in the Digicel Pro League since defeating Ma Pau Stars 5-1 on Oct. 4, recorded their second win of the season in all competitions.

Police are now into the First Citizens Cup semi-finals, tentatively set for Nov. 27, where the Lawmen must face Ma Pau Stars, while Morvant Caledonia United are against Defence Force, in a clash of two two-time former champions.

Morvant Caledonia, champions in 2011 and 2012, ousted 2013 and 2014 champions Central FC 3-2 on penalties in their quarter-final meeting following a 0-0 stalemate on Sunday in Morvant.

Other quarter-final results include Defence Force’s 4-2 win over St. Ann’s Rangers on Saturday, and on the same day Ma Pau Stars, who, like Defence Force advanced out of the play-offs, outshined seven-time champions and holders W Connection 3-0 from the penalty spot following a goalless draw.

Teams at the Ato Boldon Stadium on Monday