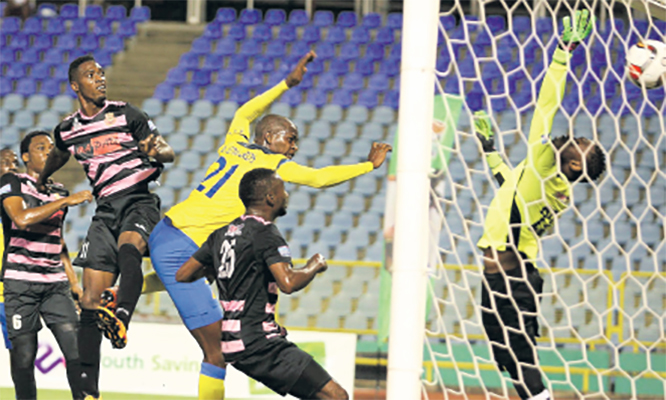 Veteran defender Aklie Edwards was in the perfect spot to head home a rebound as Defence Force captured its third First Citizens Cup title with an entertaining 1-0 win over Ma Pau Stars at the Hasely Craw-ford Stadium, Mucurapo on Friday night.

Edwards decisive strike came as early as the 14th minute from inside the 18-yard-box when he headed home from close range. He was first to react to a rebound after striker Devorn Jorsling beat goalkeeper Glenroy Samuel only to see his shot crashed onto the cross-bar and back into play to provide Edwards with a golden opportunity which he made count.

Defence Force then created a number of chances which fell to the out-of-sync lanky Hashim Arcia, who on another night could have had a hat-trick to his name, but was kept off the scoresheet by an alert Samuel, while at the other end of the field, Defence Force goalkeeper Andre Marchan was also at his best to keep out any Stars’ many threats mainly through, former Scotland-based and T&T World Cup striker, Jason Scotland.

With the win, Defence Force added to its previous First Citizens Cup triumphs in 2002 and 2009 and also walked away $110,000 richer, while also sweeping all the individual awards. Meanwhile, Ma Pau Stars, had to settle for the runner-up spot for the third time and $20,000.

DEFENCE FORCE completed a successful campaign in the 2016 First Citizens Cup with a narrow 1-0 win over Ma Pau Stars in Friday’s final at the Hasely Crawford Stadium, Mucurapo.

Striker Devorn Jorsling walked away with the competition’s Most Valuable Player (MVP) and the Golden Boot (leading goal-scorer) trophies, for a tally of seven goals, while Marvin Gordon was named as the Coach of the Tournament.

However, it was the Stars’ defence who failed to deal with a short corner, involving Curtis Gonzales and captain Jerwyn Balthazar, that proved costly.

From the set-piece, midfielder Christopher Durity saw his shot crash off the crossbar and an alert Edwards was quickest to the rebound as he bundled home his effort from inside the six-yard box.

Stars striker Jerrel Britto could have done better when he was set up by his captain, the evergreen Carlos Edwards, but his right footer was blocked by the Defence Force goalie.

On the opposite end, winger Jemel Sebro did well to chase a long ball from Durity and his header was magnificently cleared off his line by a retreating Samuel.

Both teams went toe-to-toe at each other in the second half.

Britto narrowly missed with a right-footed shot in the 53rd while Gonzales, on an overlapping run, picked out Hashim Arcia whose sliced volley was magnificently saved by Samuel.

Referee Crystal Sobers allowed play to continue though Arcia’s shirt was being held by Glenton Wolfe in the 60th minute. However, Arcia met a return ball from Jorsling, shook off Wolfe but saw his effort blocked by Samuel.

Four minutes later, Arcia got a ball from Gonzales but banged his shot off the crossbar while ex- TT and Defence Force forward Jason Scotland had two efforts (in the 65th and 76th) expertly saved by Marchan.

Balthazar had an opportunity to put the game beyond Stars’ reach in the 79th, after a give and- go with Jorsling, but his left-footed effort went sky-high.