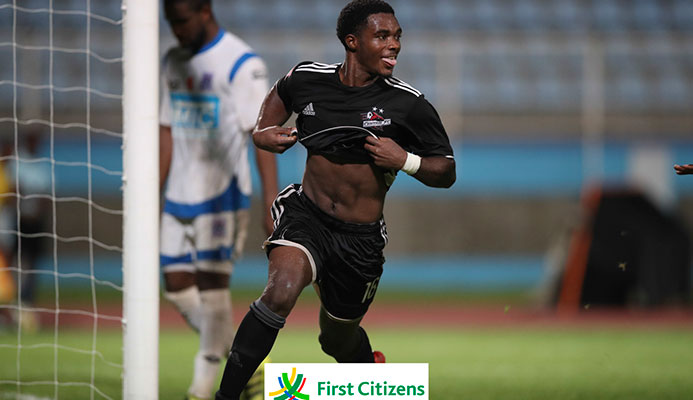 Two-time former champions Central FC are into the quarter-final round of the 2017 First Citizens Cup where they will tackle bitter Couva rivals W Connection on Sunday from 3:30pm at the Mannie Ramjohn Stadium.

Tyrik John, the son of legendary Trinidad and Tobago striker and current Central FC coach Stern John, grabbed a stoppage-time winner to lift the Couva Sharks to a 2-1 win against an entertaining MIC-IT St. Ann’s Rangers bunch in the first of two play-offs on Wednesday night at the Ato Boldon Stadium.

John (T) saw red, after receiving his second yellow card of the game for pulling his shirt over his head in celebration of his debut Central goal which also snapped the Couva Sharks’ ten-game winless spell in all competitions.

But luckily, the 21-year-old utility player will be available for selection as cards attained during the play-offs will not transfer to the quarter-finals.

Point Fortin Civic in the second play-off dispatched Police FC 4-1 on penalties after a goalless draw which including some incredible regular-time goalkeeping from Trinidad and Tobago international Adrian Foncette, who, unfortunately, was unable to rescue the Lawmen on the shootout.

Civic advances to face North East Stars on Saturday from 3:30pm at the Larry Gomes Stadium but quarterfinal action kicks off on Friday with a double-header at the Ato Boldon Stadium with Club Sando set to tackle Morvant Caledonia United from 6pm and title holders Defence Force against San Juan Jabloteh from 8pm.

The semi-finals are carded for October 20 before the competition culminates on November 3 with the final and third-place matches.

But the action kicked off in entertaining style and saw veteran midfielder Jason Marcano head the 2013 and 2014 champions Central in front on the hour mark—less than two minutes after Neil Mitchell had struck the Couva Sharks’ upright on the other end.

Rangers’ goalkeeper Cleon John had initially done well to keep out a solo attempt by Sean De Silva but Marcano, the most dangerous Central player on the night, arrived at the right time to bury the rebound.

Rangers levelled the scores 1-1 nine minutes later through substitute Josh Toussaint, who only a minute earlier had replaced Omari Lezama and it proved a masterstroke by coach Adrian Romain.

But Rangers would surrender late to Tyrik John’s strike -- exactly two minutes into the four awarded extra by referee Kwinsi Williams -- and Central, although the taste of victory soured by a red card, booked their place into the quarterfinals.

“It wasn’t the best performance,” acknowledged John (S). “(…) but I think the team showed a lot of character. We [found] ourselves and we went one-nil. [We were] more or less bossing the game after that but against the run of play they came and score [from what] was a fifty-fifty offside call. I haven’t seen [the replay] yet but it looked like offside to me.”

John (S), whose side sits on the bottom half of the Pro League standings and desperate to salvage pride as last season’s historic three-peat league champions, said advancing to the quarterfinal presents a good opportunity for his side to try and rebound.

“(A) good opportunity for us [heading into the next round against W Connection],” said the ex-Columbus Crew, Birmingham City and Sunderland striker. “We (Central) struggle for numbers, we barely making an 11. We are down to bare bones [and] a couple injuries around.

In the latter contest, Foncette, fresh from his brilliance in a historic 2-1 Trinidad and Tobago World Cup Qualifying win over the United States 24 hours earlier, made a hat-trick of point blank saves to deny Civic forward Nion Lammy on all three occasions with the latest as close up as four metres.

The Police custodian also put behind put behind a low powerful drive from Civic substitute Shackiel Henry six minutes from time after Stephan Campbell had miraculously headed behind a powerful strike from Jameel Perry midway through the second half on the other end.

Civic, however, were clinical from the spot with Jabari Mitchell, new signing Nathaniel Garcia from Central, Shakiel Henry and Nickcolson ‘Ice’ Thomas all scoring while Police veteran midfielder Todd Ryan stood the only Lawman to find the back of the net on kicks before teammates Clevon Mc Fee saw his effort crash off the bar and Dillion Kirton hitting overbar on the third.