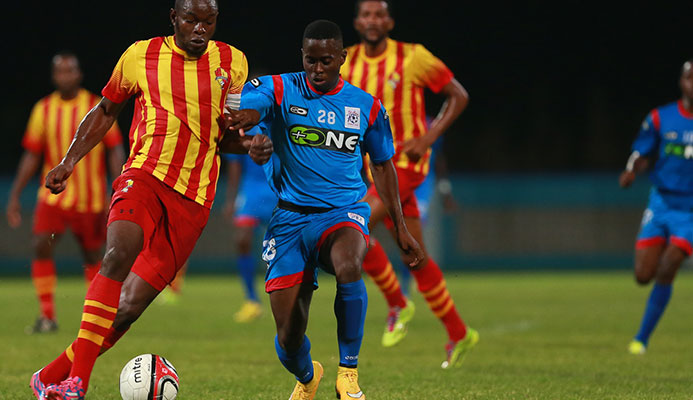 Former Trinidad and Tobago youth forward Matthew Bartholomew, who had not scored a top flight goal as far back as the previous two Pro League seasons, shook off the rust with a double as Point Fortin Civic rallied from a one-goal deficit to edge St. Ann’s Rangers 2-1 on Friday night in the first game of a Pro League double-header at the Hasely Crawford Stadium in Port-of-Spain.

The result, which saw coach Reynold Carrington’s charges rise off the bottom but only ahead of Rangers for ninth, also snapped a ten-game winless run by Civic in all competitions stretching back to four games into last season.

W Connection, on the opposite end of the spectrum in second, faced hosts Morvant Caledonia United in the second game and in search of maximum points to go level on points with leaders North East Stars, who have two games in hand against Central FC and San Juan Jabloteh.

But the Savonetta Boys were lucky to come away with a point as that encounter ended in a 1-1 draw after Morvant Caledonia were denied twice by the frame.

Connection forward Marcus Joseph, with his fifth goal of the season, broke the deadlock on 56 minutes, heading past goalkeeper Glenroy Samuel at the near upright off a well-placed Hughtun Hector free kick.

That lead however, lasted only ten minutes with Morvant Caledonia captain Kareem Joseph celebrating the equaliser. Connection goalkeeper Jason Belfon had pushed Kareem Baptiste’s shot onto the upright, only to see the ball ricocheted off Joseph’s leg at the goal mouth and into the net.

It was the end of Belfon’s luck after the Grenada international’s post was rocked twice in the first half.

Morvant Caledonia midfielder Kerry Daniel rattled the Connection crossbar from 30 yards out on the half-hour mark, and six minutes later the upright stood in the way of a Lester Joseph strike from the edge of the area.

But the greatest chance of the half fell to Kelrick Walters two minutes from the interval, however the Dominica international midfielder failed to control a Daniel feed at the goalmouth with Belfon at his mercy.

Earlier on the night, Rangers and Civic, two cellar-placed teams but boasting a number of young talents looked complete for draw until the final minute of regulation time.

Bartholomew, who levelled Civic in the first half, completed his double by burying substitute Juma Clarence’s low cross past goal keeper Christopher Biggette for the 2-1 victory.

But Bartholomew levelled the visitors six minutes later, firing from the right off a rebound to beat Biggette, who had parried Keron Neptune’s initial shot away from goal.

Moments later Darnell Hospidales saw his free kick crash off the post after Bartholomew was brought down above the area as the excitement progressed.

Civic though, were forced into two premature changes with teenaged attacking midfielder Judah Garcia and defender Trent Lougheed retiring hurt and replaced by Jamal John and Jerren Jackie respectively before the break.

Carrington’s side created a few second half openings including an angled shot from Trinidad and Tobago Under-20 creative midfielder Justin Sadoo that had Biggette reacting to danger. Sadoo’s national U20 teammate and Rangers’ winger Kathon St. Hillare created the best chance on the opposite end but fired overbar.

And just as the match looked destined for draw, Bartholomew delivered the Civic ninetieth-minute winner which was preserved two minutes into stoppage-time by Adams, who acrobatically tipped overbar a deflected Omari Lezama free kick.