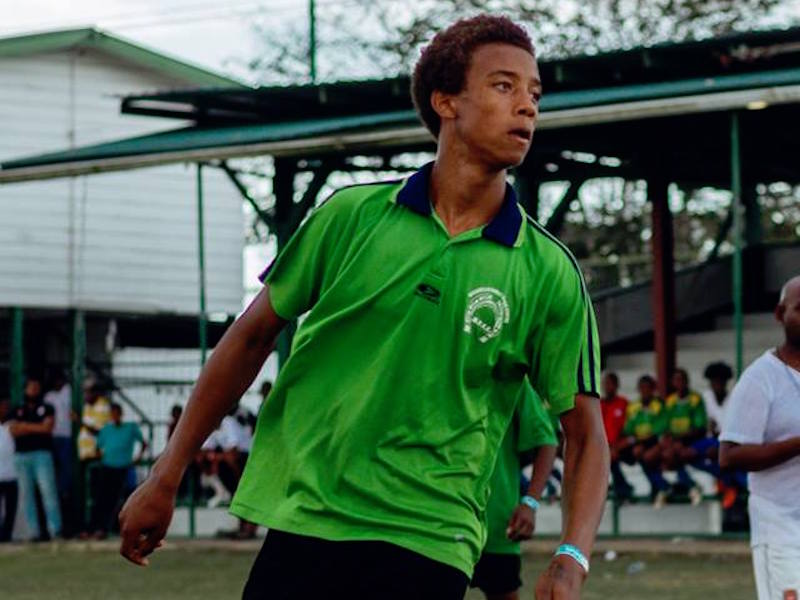 The Marabella Family Crisis Centre and friends will be hosting a memorial football event in recognition of the tragic murder of Noah Simmons at Manny Ramjohn Stadium on Saturday 26th May 2018.

Noah was a talented young footballer living in Marabella, who had never come to the attention of the police.

He attended - and played for – Shiva Boys Hindu School as well as representing Central F.C. in the Flow Youth Pro League through his association with the Anthony Sherwood Football Academy.

Noah was a regular attendee of the Marabella Family Crisis Centre and spent many happy hours playing football at Manny Ramjohn Stadium. Noah was gunned down on the morning of his 16 th birthday. No motive has been determined.

The purpose of the event is to bring the Marabella community – and, indeed the entire T&T community - together to promote the messages “Shoot Goals, Not Guns” and “Join A Team, Not A Gang”. This will be a day for the community to promote peace using the medium of football. All Pro League clubs will submit two players to form an All Star Pro League team to play the National Under 20 team. Prior to this game, we will stage a game between Shiva Boys and the Marabella Family Crisis Centre and friends.

The organisers are appealing companies to obtain free snack and drink product to sell on the day.

Additionally, they will be selling advertising boards around the field.

The entire amount raised through this event will be donated to Marabella Family Crisis Centre in memory of Noah Simmons.

The first game between Shiva Boys and Marabella Family Crisis Centre will kick off at 2pm. It will be 30 mins each half. The feature game between the T&T Pro League All Stars and the National Under 20’s will commence at 3.30pm and consist of 2 X 45 minutes halves.

“We are hoping to attract a big crowd to support this event” said Anthony Sherwood, who is one of the event organisers. Noah was a regular attendee at Sherwood’s football academy, as well as the Marabella Family Crisis Centre. “This is not just a football event.” Added Sherwood. “I believe this tragedy could become a catalyst for communities to stand up to crime in their areas.”

Another of the organisers, Kevin Harrison of Central F.C. said “We must stress that this event will be nonpolitical, as it is about the community putting aside race, religion and politics and join together to create peace in our communities. It will fall nicely into a company’s Corporate Social Responsibility programme and, we are hoping that businessmen will get behind this event and offer monetary or product donations.”

Harrison said that all proceeds will go to the Marabella Family Crisis Centre. “We’re not looking for huge headline sponsors. It’s more important to us to see corporate T&T coming together to oppose crime, with lots of companies contributing whatever they can to raise funds for the Crisis Centre.”

Sherwood, an outstanding football prodigy in his youth, added “People don’t realise just how much good work is carried out by Terry Boissiere and the rest of the team there. They don’t just coach football. The Centre offers a safe haven to those people in the community who may be at risk. They offer counselling services, provide mentorship and role models and, in some instances, provide a family network to those who need it”

The organisers have been pleased with the support received so far, and gave thanks to the TTFA, T&T Pro League, Shiva Boys Hindu School, referee, Rashbie McPhee and SPORTT for their assistance.

“We have received a good response on our Noah Simmons Memorial Event facebook page and interest from companies we have spoken with. Without doubt, the football community has come together to make this event happen. We expect a crowd of at least 1,500 to attend on the day, with the Marabella community attending to express their grief for Noah and their opposition to the crime situation in the country. But we are hoping that people attend from right across the country and make this an event that the government takes note of.”

Harrison added that support is still needed from corporate T&T. “We need refreshments such as water and soft drinks, as well as snacks etc. Because all profits go to the Crisis Centre, we are trying to reduce our overheads as much as possible. We’re also hoping that Minister Cudjoe will waive the fees associated with hiring Manny Ramjohn Stadium for the event.”

Gates open at Midday on Saturday with the first match kicking off at 2pm.