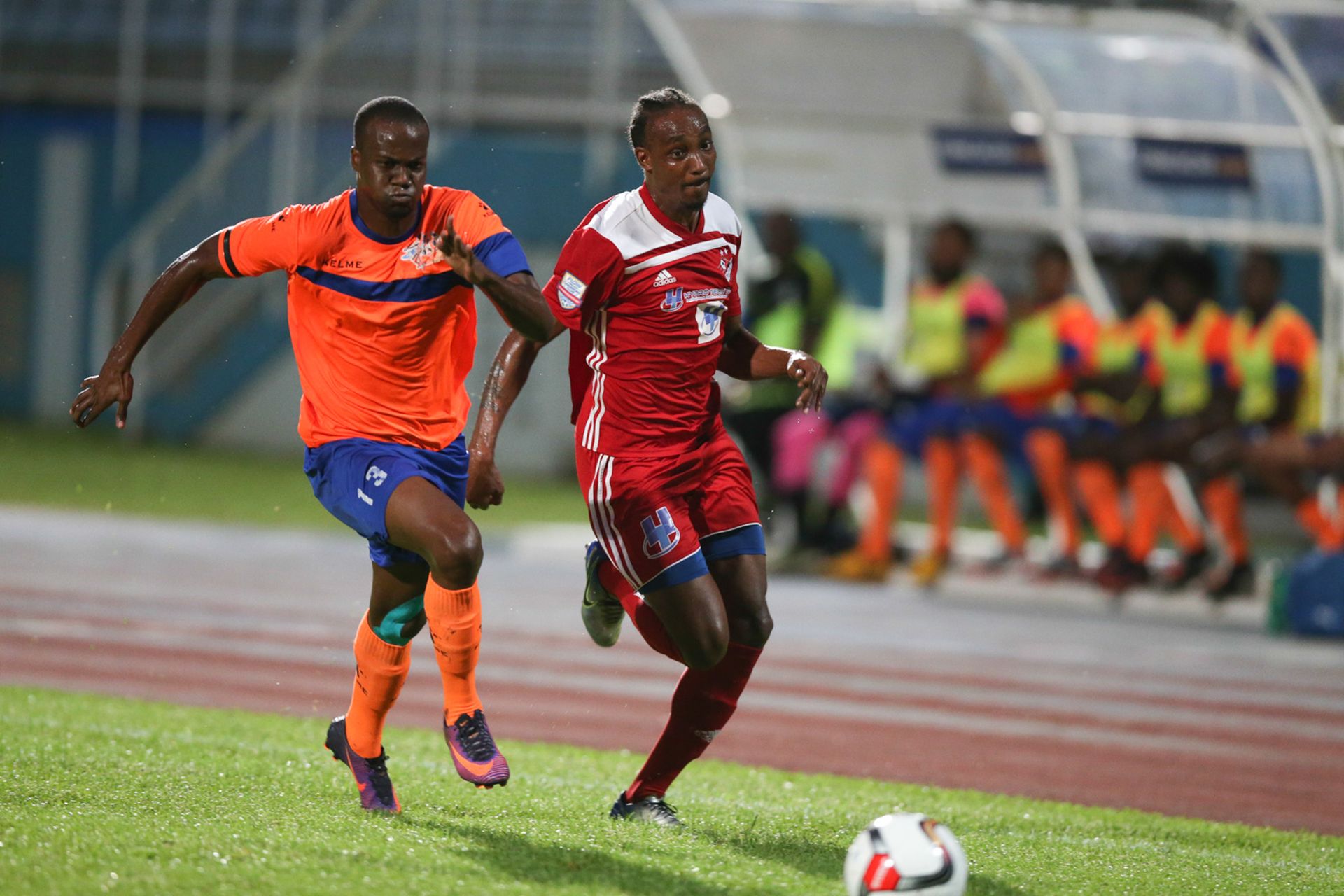 W Con­nec­tion bid for a sixth T&T Pro League ti­tle and first since the 2013-2014 cam­paign was slowed on Wednes­day night af­ter a 1-1 draw with for­mer cham­pi­ons, San Juan Jabloteh at the Hase­ly Craw­ford Sta­di­um, Mu­cu­rapo.

But the league lead­ers’ joy was short-lived as Jabloteh hit back two min­utes lat­er thanks to Nick­el Orr to even up the match at 1-1 af­ter which both teams failed to find the win­ner.

With one round of match­es left for the top three teams, W Con­nec­tion heads the ta­ble with 34 points from 17 match­es, one ahead of Po­lice FC and three-time win­ners, Cen­tral FC.

Down at the Ato Boldon Sta­di­um, Cou­va, na­tion­al mid­field­er Du­ane Muck­ette de­ci­sive strike in the 75th minute se­cured a 2-1 win for Cen­tral FC over De­fence Force to stay in the chase for a fourth Pro League ti­tle in five years.

Akim Arm­strong had giv­en Cen­tral FC the lead in the fourth minute, but Rodell El­cock got De­fence Force on lev­el terms on the stroke of half-time, be­fore Muck­ette’s win­ner.

And in the night’s oth­er en­counter at Cou­va, Shack­iel Hen­ry scored a sec­ond-half hat-trick as Club San­do rout­ed St Ann’s Rangers 8-0 to move sole­ly in­to the fourth spot with 30 points and two match­es left to play.

With last year’s league cham­pi­ons North East Stars be­ing sus­pend­ed for two out its match­es due to fi­nan­cial prob­lems, the league has tak­en a de­ci­sion to resched­ule their out­stand­ing match­es against Club San­do and De­fence Force pri­or to the fi­nal match day for all teams while a de­ci­sion was made to award St Ann’s Rangers a 3-0 de­fault win over Stars for a called off en­counter.

How­ev­er, when the fi­nal round of match­es do kick off, W Con­nec­tion will be heav­i­ly fan­cied to com­plete its ti­tle chase as it faces cel­lar-placed North East Stars; while Cen­tral FC and Po­lice clash; and Mor­vant Cale­do­nia Unit­ed meet Club San­do.

And in the oth­er match­es. Pt Fortin Civic comes up against De­fence Force FC while Jabloteh faces Rangers.

Pro League goes down to the wire
By Joel Bailey (Newsday).

At least three teams in contention on final day

THE 2018 Pro League will be decided on the final day of action on December 5, with W Connection, Police, Central FC and Club Sando all in the title hunt.

After 17 matches, W Connection have a tally of 34 points, followed by Police and Central FC with 33 apiece. Club Sando, who have a game in hand against 2017 league winners North East Stars tomorrow at the Ato Boldon Stadium in Couva from 5 pm, are on 30 points.

W Connection’s final match will be against North East, but Police and Central FC are set to square off against each other in their last league fixture.

On Wednesday, five-time league kings Connection dropped two crucial points as they were held to a 1-1 draw by Jabloteh, in the second of back-to-back matches at the Hasely Crawford Stadium, Mucurapo.

Connection needed a win to maintain the three-point gap between themselves and their nearest rivals, Police and Central.

But the Stuart Charles Fevrier-coached outfit struggled to break down a disciplined Jabloteh squad.

Six minutes before the half-time interval, in-form striker Marcus Joseph met a corner from Jomal Williams, but his header went inches over the bar.

Connection changed gears in the second half, and bombarded the Jabloteh defence with a series of attacks.

Williams went close with a right-footed effort in the 48th; Corbin poked wide of the mark after collecting a pass from Joseph in the 53rd, and followed up with a scissor-kick attempt overbar in the 55th.

Joseph’s header, from a cross by left-back Kurt Frederick, missed the target by inches.

The pressure eventually paid off in the 63rd, as Frederick raced down the left and sent a ball which was missed by Joseph, but Benjamin was on hand to hit home from close range.

Jabloteh were not intent on leaving the match empty-handed, and national Under-20 midfielder Nickel Orr responded with an equaliser in the 66th, as he waltzed past three defenders (Triston Hodge, Frederick and Gerard Williams) before slotting his left-footed shot beyond the reach of goalie Julani Archibald.

Central FC stayed in the race to earn their fourth league crown in five seasons with a hard-fought victory over the Army-Coast Guard combination.

Akim Armstrong put Central ahead in the 15th minute, but Rodell Elcock equalised for Defence Force in the 45th. Duane Muckette got his name on the scoresheet in the 75th to ensure three vital points for Central.

Akeem Humphrey (18th and 76th) and Keron Cornwall (80th and 82nd) each scored twice, and Tyrone Charles completed the rout, in the fourth minute of second half stoppage time.

On Tuesday, Point Fortin Civic registered a 3-1 victory over North East, at the Larry Gomes Stadium in Arima.

In related news, there will be a rescheduled league fixture today, with Point Fortin hosting Defence Force at the Mahaica Oval from 7 pm.