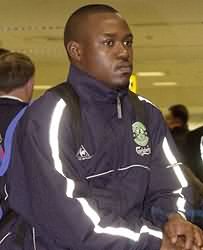 After only a year in the Digicel-sponsored TT Pro League competition, Ma Pau SC is aiming to be among the leaders this season.

Last year the Casino Men finished a credible fifth mainly due to the recruitment of Michael McComie as their coach, just two weeks before the start of the season.

After 25 matches Ma Pau completed a decent season with 38 points, having beaten all of the league’s top teams and now being considered a major threat.

On Tuesday night at the club’s Dinner and Awards at the Mas Camp Pub, Woodbrook, Chief Executive Officer (CEO) John Wallis credited the players for a good inaugural season in the country’s top flight football league.

But he urged them to go the extra mile if they want to take home the silverware and bragging rights in TT football. Wallis reminded the players they are already blessed with the God-given talents but stressed it would take a lot more than that to reach the heights of the world’s top international footballers.

Wallis further advised the players and supporters that Ma Pau is more than just playing football. “Ma Pau is about life. Sharing with others and helping in the community. It’s all about winning in life,” he said in front an attentive crowd.

Mc Comie, a former national and Joe Public goalkeeper, who has been entrusted with the responsibility to lay the foundation for youth development at the club, described the performance of the team as “excellent”. He said the players made the sacrifice to reach where they have last season.

“The players decided that they wanted to be competitive for the Pro League and we worked hard on that. We realised before the season that we would have been required to put in some extra work and this is what we did,” McComie said.

McComie recalled that in one of their most challenging matches, Ma Pau had to deal with Russell Latapy  “The Little Magician” and Caledonia AIA.

“We decided to man-mark Latapy and one of the team’s youngest players said that while he didn’t know if he could have man-marked him for the entire game, he was willing to try,” said McComie.

He told the gathering that they also faced tough challenges from southerners W Connection and Defence Force. McComie announced that local football (at the club and national levels) is gearing for a big boost in the coming three weeks.

During this time a player from Ma Pau is expected to sign a contract with an international club. “Should this materialise then the doors will be opened up for players at his club as well as at the different teams in the TT Pro League.

Meanwhile former national midfielder and striker Lyndon “Chubby” Andrews and Anthony Wolfe were among the club’s top five players for the 2009 football season, while Kevin Molino was named the Best Young Player for 2009. Molino, who joined the club soon after being named the Most Valuable Player at the 2008 Secondary Schools’ Football League (SSFL), continued his impressive form to earn himself the nod over the other young players.

Molino’s spate of excellent performances also assured him a place on the Trinidad and Tobago Under-20 team which contested the FIFA Under- 20 World Cup in Egypt last year.

Among the seniors, Andrews, a veteran midfielder who received the award for the best midfielder at an international Under-15 championship in Martinique in 1990 had been the number one choice among the club’s top players.

Wolfe, a prolific striker who also copped the club’s Most Goals award earlier, was an automatic choice with a string of excellent performances.

An equally talented Trevin Caesar was named the club’s Upcoming Player while Curtis Gonzales was adjudged the Most Improved. The players were all presented with a plaque and a bag of football gear and equipment.

The Chairman’s Award for the most discipline player of the year went to Rennie Britto.