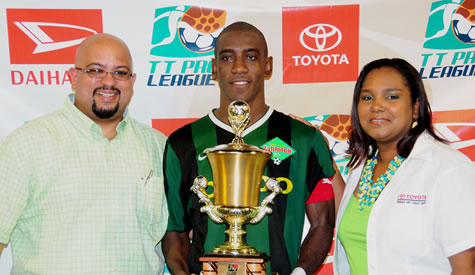 The signing of the 35 yearold former Jabloteh and Joe Public midfielder is a sign of the club’s determined ambition to thrive at the top flight local football despite financial struggles.

“Trent has come in and already shares a lot of knowledge to the other players,” said head coach Anthony Streete.

“He is a very experience player and we are delighted to have him. It’s just for him to really give his best for the club.”

“Mc Farlane is a good player to have around the team, because he is a leader,” explained the Rangers coach. “Both Trent and Errol have the desire to achieve this season by helping the club win piece of silverware. It’s also a second chance for them to apply their trade.

“As for Morris, I’m really glad to have him back with us. He started with us as a forward before I realized his potential as a defender and now I’m really happy to see him dominating the game as a young defender.”

In July, a deal was struck when the former England defender Fenwick and Smith approached Fakoory with the idea of merging the struggling Pro League team with the football club of the Queen's Park Cricket Club, which had been relegated from the National Super League.

The merger would have brought together the Rangers player resources and facilities at the Queen’s Park Oval.

But three weeks ago, it was announced by Fakoory that the merger broke down after Fenwick and his associates failed to fulfill the financial memorandum.

Fakoory said, “At the time it looked a perfect fit.

Now Fakoory, who continues to plead for corporate backing, says, “We will continue to battle it through our struggles.”

“We want to start on the right foot with a victory,” said Streete. “It will do well for us especially as we are still looking for sponsorship at our club.

“We are also happy that we’re starting against W Connection. They also have a new bunch of players just like us. And I think that the youths I’ve kept can really make a difference for Rangers.

“It’s also a joy playing against W Connection. They play constructive football and it’s a joy as a coach coming up against Coach Stuart (Charles Fevrier), my former TRINTOC teammate. We are very similar when it comes to putting the ball down and playing the game.”