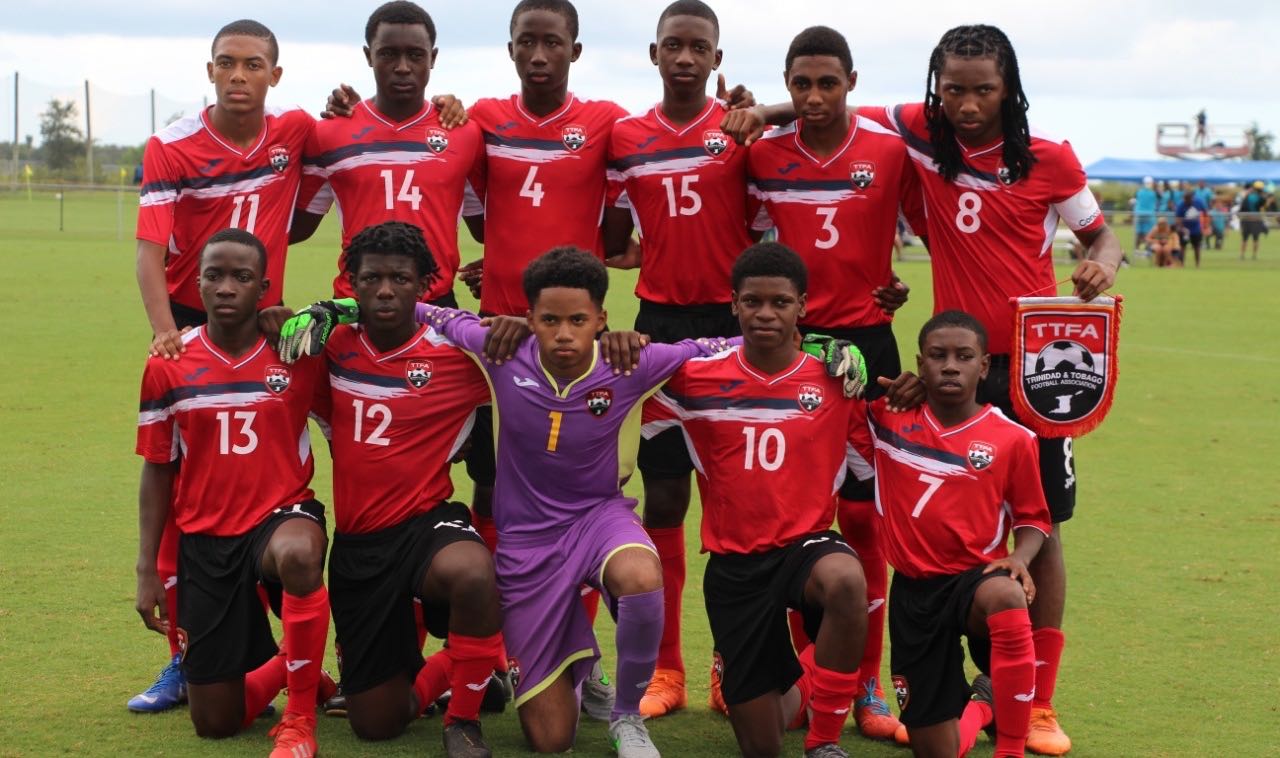 Head Coach Stuart Charles-Fevrier was very disappointed with the result but pleased with the performance as Trinidad and Tobago was held to a 1-1 draw by Barbados in the Concacaf Boys U-15 Championship.

On the second day of competition at the IMG Academy in Bradenton FL., poor finishing was the order of the day for T&T as they started positively by creating a number of goal scoring opportunities in the opening fifteen minutes but capitalized on none.

Nathaniel James and Abdul Quddoos-Hypolite both did well to get sights on goal but were either off target or stopped by Ramario Carter who put in a Man of Match performance in the Barbados goal.

A thought must be spared for winger Josiah Wilson who mesmerized his opponents with surging runs into the penalty area only to see his crosses and centers end with the ball in the bushes surrounding the IMG.

Wilson decided to do it himself in the second minute of added time in the first half, when he took a short corner to Hypolite and collected the return ball to fire a rocket from the top of the box pass Carter’s first post for a long-awaited go-ahead item.

Barbados leant from the first period, adjusting to consolidated in defence for the second half and trouble Fevrier’s team with the occasional counterattack. They also benefit from number soft fouls around the penalty area to launch some testing free kicks but it was still the men in red with the majority of the possession. Trinidad and Tobago paid the footballing price for those misses by conceding the equalizer six minutes from time. The Barbados number 10 Nadre Butcher (who came on as a substitute) receiving a ball from deep and taking it well to fire and beat Kanye Lazarus in the T&T goal.

“We dominated the game but you have to score to win, so the 70% possession we had (though good) was not enough to get 3 points.” Charles lamented after the game. “The boys are in pain but this is what happens when you don’t score your chances, they must learn that and must learn it fast because we have an important game on Wednesday which will give them and ideal opportunity to bounce back from this” said the coach in closing.

With Portugal and Costa Rica playing to a 2-2 draw in the other group match, it seems an uphill task for T&T to advance when they face the Europeans in their final Group D match on Wednesday.

How­ev­er, Charles-Fevri­er told the me­dia that he was some­what pleased with the per­for­mance of the team.

On the sec­ond day of com­pe­ti­tion, poor fin­ish­ing af­fect­ed the T&T team, de­spite start­ing pos­i­tive­ly and cre­at­ing nu­mer­ous chances in the en­counter. Nathaniel James and Ab­dul Qud­doos-Hy­po­lite both did well to get sights on goal but were ei­ther off-tar­get or stopped by Ra­mario Carter who put in a Man of Match per­for­mance in the Bar­ba­dos goal.

The Ba­jans de­ci­sion to tight­en up in their de­fence curbed the T&T at­tacks, and lat­er ben­e­fit­ted from sev­er­al soft fouls around the penal­ty area to launch some test­ing free kicks. In spite, if this, the men in the red, white and black still con­trolled the ma­jor­i­ty of the pos­ses­sion.

T&T then paid the foot­balling price for their missed chances by con­ced­ing the equal­iz­er six min­utes from time. Bar­ba­dos num­ber 10 Nadre Butch­er, who came on as a sub­sti­tute, picked up deep with­in his half and took it past his mark­ers be­fore ri­fling his shot past Kenye Lazarus in the T&T goal area.

Af­ter­wards, Charles-Fevri­er said, “We dom­i­nat­ed the game but you have to score to win, so the 70% pos­ses­sion we had (though good) was not enough to get three points.”

He not­ed fur­ther, “The boys are in pain but this is what hap­pens when you don’t score your chances, they must learn that and must learn it fast be­cause we have an im­por­tant game on Wednes­day which will give them an ide­al op­por­tu­ni­ty to bounce back from this.”

With Por­tu­gal and Cos­ta Ri­ca play­ing to a 2-2 draw in the oth­er group match, it will be an up­hill task for T&T to ad­vance when they face the Eu­ro­peans in their fi­nal Group D match on Wednes­day.