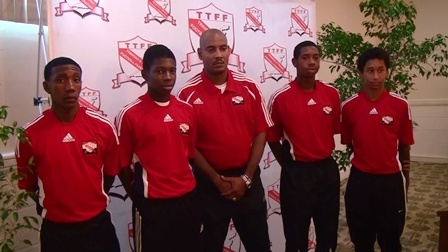 Canada commeneced its 2013 CONCACAF Under-17 Championship campaign Saturday with a 2-0 victory over Trinidad & Tobago at the Estadio Agustin "Muquita' Sanchez.

The triumph took the North American side atop the three-team Group B table with three points, while the young Soca Warriors must get a win or a draw in its match against Costa Rica on Monday to remain in contention for a quarterfinal place.

Trinidad started to creep back into the match, but in the 42nd minute, Marco Dominguez-Ramirez netted the game's first goal, firing in from 18-yards out off a clever free kick by Bustos.

After the interval, Canada remained on the offensive and was rewarded with a second goal in the 59th minute.

Hamilton dribbled into the right side of the Trinidad box and attempted to chip goalkeeper Johan Welch. The shot was saved, but the ball went straight to Hamilton, who slotted home from close range.

Canada, which lost 3-0 after extra time to the United States in the competition's 2011 final, will face Costa Rica in its last group match on Wednesday.

The current edition of the regional U-17 Championship will be the second to feature a twelve-team format in the championship round.

Two countries from each of the four groups will advance to the quarterfinal round, where they will have the opportunity to play for one of the four regional berths on offer for the 2013 FIFA Under-17 World Cup in the United Arab Emirates.

Trinidad and Tobago’s Under-17 footballers did not get off the desired winning start in the final round of World Cup qualifiers despite a compelling performance in Saturday’s 2-0 defeat to Canada at the Estadio Agustín Muquita Sánchez in La Chorrera, Panama.

TT, captained by Brendon Creed, took the game to the Canadians and had their backs against the wall for large parts of the encounter in which both teams created a fair amount of goalscoring opportunities.

The “Young Warriors” had the better chances but Canada made use of theirs, with Marco Dominiquez Ramirez netting in the 42nd minute and Jordan Hamilton doubling the lead in the 59th minute to secure the three points for Canada.

TT will now have to go for an outright win against Costa Rica tonight at 9pm to keep their chances of qualifying for the quarter-finals alive.

“It’s very difficult to accept the result but I felt proud and pleased about the performance of the team,” Cooper said.

“We didn’t get into the match until maybe after fifteen minutes but then we were in control for long moments and we were able to create the chances which we just could not convert. But I’m pleased still with the effort. Now we have everything to play for against Costa Rica,” he added.

TTFF Technical Director Anton Corneal went as far as describing the current Under-17s as better than previous teams he had worked with.

“The performance did not warrant the result. It is one of the few times when I can say we played the game properly. It was one of the games I thought we should have come away with a victory. I am not saying Canada played badly but we deserved more,” Corneal said.

“It was not the result we wanted but we surely saw great signs of the type of performance we wanted. I was very happy with a lot of players today and it showed that we have got that potential to play at this level. Sometimes you think how can you compare the various teams.

This team has played better than nearly any of the teams that I’ve been around including the one that I actually coached (and qualified with in 2007). This one was more all-round, more committed to the task. But at the end of the day, goals win matches,” he concluded.

Canada coach Stephen Flemming added, “(TT) do some great things at times, it’s a real challenge to play against them...we have to get better for sure, but for the first game of a tournament, it’s important to get the three points, and that’s what we did.”

Canada, with ten players from MLS clubs in their squad, settled first and forced two early corners, with Hamilton shooting over bar in the 13th minute. But TT got into stride around the 20 minute and began to take control of possession. Brent Sam shot over bar and Akeem Garcia’s effort went inches over in the 20th.

The midfield play of Andre Fortune opened up the Canadians at the back while Levi Garcia and Akeem Garcia were keeping their opposite numbers busy on the flanks. Right-back Shannon Gomez was also a handful, solid in defence and overlapping whenever the opportunity was there.

In the space of seven minutes TT managed three good openings on goal with Josiah Trimmingham, Garcia (A) and Gomez going close.

But Canada remained organised and seized the initiative against the run of play. A dubious free-kick call by American referee Juan Gonzalez led to Dominguez Ramirez firing past a stranded Johan Welch from just atop the penalty box to put Canada 1-0 ahead moments before the break.

TT were able to force two further scoring opportunities before the halftime break. Leland Archer’s header soared over bar from the centre of the box and Sam blasted high.

TT began the second half in similar fashion but Canada kept their cool and punished their opponents in the 59th.

Welch partially blocked an initial attempt but Hamilton of Toronto FC ran into to nail the rebound.

Canada were sitting comfortably with the 2-0 advantage but TT searched for their first goal. Substitute Aikim Andrews caused them some problems on the right flank with his nifty footwork. On two occasions, he turned on a couple defenders, leaving them behind before directing his effort wide of the mark.

Sam also had another glorious opportunity from just inside the box but his hurried attempt flashed wide o the upright.

Panama and Jamaica played to a 1-1 draw in the second game of the doubleheader on Saturday night.