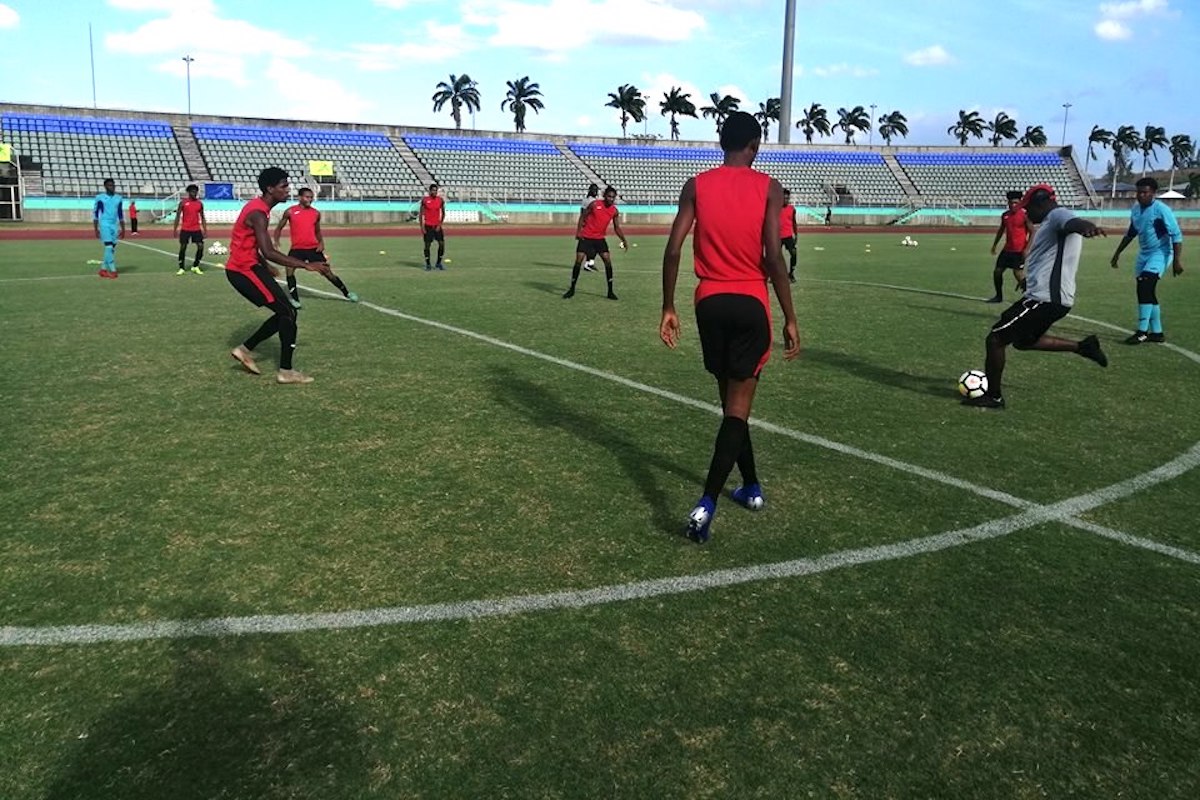 John alongside assistant Kenwyne Jones had been preparing a provisional squad for the past few weeks before selecting the final twenty.

T&T faces Bermuda in its opening group encounter on May 1st at IMG Academy in Bradenton, Florida. They then face Jamaica on May 3rd and Mexico on May 5th. The top three teams will advance to the knockout stage.

See Video below for John comments at today’s press briefing.

“I am very excited about our upcoming tournament. The guys took the training very well. We had to get in everything  in a very short space of time. The guys took it all on board and relishing the opportunity. The guys are excited and I am excited myself to go there and compete. We want to go there and try to qualify for the second round firstly. I think our main goal is to win our first game which is important. I think once we do that then we have a very good chance of qualifying for the knockout phase,” John said.

The 2019 CONCACAF U-17 Championship will be the 6th edition of the CONCACAF Under-17 Championship (19th edition if all eras included), the men’s under-17 international football tournament organized by CONCACAF. It will be hosted in the United States between 1 May and 16 May 2019.  The top four teams will qualify for the 2019 FIFA U-17 World Cup in Brazil as CONCACAF representatives. Mexico are the defending champions.

The format for qualification has changed since the 2017 edition. The qualifying competition no longer features Caribbean and Central American zones.

The 41 CONCACAF teams were ranked based on the CONCACAF Men’s Under-17 Ranking as of May 2017. A total of 35 teams entered the tournament. The highest-ranked 16 entrants were exempt from qualifying and advanced directly to the group stage of the final tournament, while the lowest-ranked 19 entrants had to participate in qualifying, where the four group winners advanced to the round of 16 of the knockout stage of the final tournament.

Trinidad and Tobago Under 17 Team Roster

Gary Griffith III, son of Commissioner of Police Gary Griffith, will be part of a 20-man Trinidad and Tobago National Under-17 Team that travels to Miami  on Monday for the Under-17 Concacaf Championship, which also serves as a World Cup qualifying series.

The National Under-17s, coached by Trinidad and Tobago senior international record goal scorer Stern John, begin their campaign against Bermuda on 1 May.

Fatima College contributed more players to the squad than any other team with Jean-Heim Mc Fee, Andrew De Gannes and Zachary Welch all making the 20-man squad. Araujo-Wilson is also a former Fatima student.

John, who was assisted by former 2006 World Cup teammate Kenwyne Jones, had barely six weeks to prepare the team but was pleased with what they got done.

“We had to get in everything in a very short space of time,” John told the TTFA Media. “The guys took it all on board and [are] relishing the opportunity. [They] are excited and I am excited myself to go there and compete.”

The National Under-17s were not supported financially by the Trinidad and Tobago Football Association (TTFA) and the coaching staff worked for free. John admitted that the squad sometimes relied on aid from parents in the areas of post-training meals, transportation and visa applications.

John singled out Griffith for his assistance to the squad.

“Special thanks to Mr Gary Griffith, the Commissioner of Police,” said John. “He came forward and really helped the team out in preparing for this tournament. In terms of nutrition, getting us food and stuff on time, also transport for the boys after training as well.

“Most of our sessions were held at Mannie Ramjohn, and the traffic [is] really bad on the afternoon and I think he played a very important role in getting the boys on a [police] bus from Port of Spain to the stadium on time and back to their respective homes as well.”

“[…] Mr Griffith was pivotal in helping us to fast track some of the visas as well too. He used some of his resources so we got the visas on time. Today the manager [Aaron Pollard] would’ve went to the embassy and picked up the rest of passports with all the visas so we could travel on Monday.”

John insisted that Griffith’s financial aid to the team did not give his son an advantage when it was time to select 20 players for the Concacaf tournament. Griffith III got minutes with North East Stars’ Pro League team in the 2018 season and is set to take up a scholarship with Sunderland College. He was one of two St Mary’s College players—the other being SSFL stand-out Gabriel Nanton—who trialled with former England Premier League team, Sunderland United, last year.

“No, no, no [Griffith’s assistance to the team did not influence my selection],” said the National Under-17 coach. “I think I was given a job to represent my country and to pick the strongest team that I have at hand. People might think Mr Griffith’s influence in helping the team made his son get a pick but it’s not that way.

“I think his son came in and worked hard just as everybody else and he competed for a spot just like the rest of players and he deserved to be on the squad.

“[…] Griffith III plays up front and out wide too. He has a great, great, great attitude; he brings a lot to the table and [has] very good quality. That’s why we picked him; because we know he has the quality we’re asking for and we know he can play at this level too.”

Financial woes apart, John’s outfit also struggled with the timing of the competition which clashes with the CSEC examination. However, the head coach suggested that the Trinidad and Tobago Football Association (TTFA) found a solution by getting examiners from the Ministry of Education to travel with the team.

“We have like five players who have exams [during the tournament],” said John. “We worked with the schools, we came together and we figured out a way around it; so they can get the exam and play the games as well too.

“I think also the further we go into the tournament, there’s a couple more players who [will] have exams… We’re gonna have to deal with it there and then, even if we have to let the players sit the exam and then probably play the games afterwards.

“But obviously the school [work] is very important as well too.”

Wired868 was unable to get more details about the students who are due to sit exams and what the TTFA has put in place to assist them.

Team manager, Pollard, said he could not pass on that information unless specifically authorised to do so by new general secretary Camara David, who has instituted a gag on all TTFA staff outside of arranged press conferences.

John was pleased with the success of his combine in Atlanta, which led to selections for four players. Curtis De Leon, who represented the David Nakhid International Academy at the recently concluded Madrid Cup, is one of that quartet along with Kevan Kahoussi, Sayeed and Nixon.

He hopes to keep tabs on these players in a database that the football body promised to implement.

“We have a database that [allows us to keep] in contact with the players and also the parents,” said John. “Even the ones that weren’t chosen, we still keep in contact with them because […] if we qualify for the World Cup, we’re gonna have to go back and look at players.”

Bermuda apart, Trinidad and Tobago must also compete with Jamaica and Mexico in the group phase. One from the quartet will be eliminated while the other three advance to the quarterfinal round.

“We want to go there and try to qualify for the second round firstly,” said John. “I think our main goal is to win our first game which is important. I think once we do that then we have a very good chance of qualifying for the knockout phase.”

Members of the Trinidad and Tobago Men’s Under 17 team underwent medical screening tests on Tuesday at the South Coast Medical Centre, a branch of Healthnet Caribbean Limited in San Fernando ahead of their upcoming CONCACAF Qualifying championship at IMG Academy in Bradenton, Florida starting May 1.

The current squad has been in training under head coach Stern John for just over a month. The medical tests are mandatory for all competing teams in the Concacaf championship.

Healthnet conducted the tests pro-bono for the TTFA, continuing its partnership dating back to 2014.

“It’s an important part of our final preparations for the tournament. We need to know exactly where our players are at health-wise and I really want to extend our sincerest gratitude to Mr Ramrekha and Healthnet for their services which is of no cost to the TTFA ahead of this qualifying competition,” T&T U-17 head coach Stern John said.

Healthnet CEO Richard Ramrekha spoke about his company’s involvement with the TTFA, saying “We have been doing this service probing for the Association for the past four years and it is really a privilege and honour to be part and parcel of this initiative. We feel honoured to render our services to the youth of the nation and certainly the footballing fraternity is one where we see we can make a positive contribution to that philosophy of contributing to the youth of the nation and developing our footballers.

“Just as physical fitness is very important to the footballers, medical fitness is also a key component of their overall fitness as a footballer. The medical involves a thorough examination – cardiovascular, kidney, liver,full blood count and we check all of their systems including vision. Our doctor, Dr Navi Muradali conducts a thorough physical examination as well. We put together medical report which will highlight or indicate if there are any abnormalities or anomalies or findings we need to further evaluate or investigate and determine the physical readiness of the players for games. We are conducting these examinations in accordance to Concacaf guidelines. We then pass on all the findings to the TTFA’s chief medical officer for his final determinations on the players,” Ramrekha said.

“We intend to provide this service pro bono to all national teams from men to women and youth. We see this is our corporate social responsibility to make a positive contribution to our country. We think that investing in our youth and the younger generation is very important for sustainability and development of our country. Football is a big deal for Trinidad and Tobago We have qualified for the World Cup once and we will love to be there at all levels but there are other tournaments that will bring some good joy and comfort to our citizens such as the Concacaf Gold Cup. It will really do a lot of good for Trinidad and Tobago,” Ramrekha added.

Trinidad and Tobago National Under-17 team