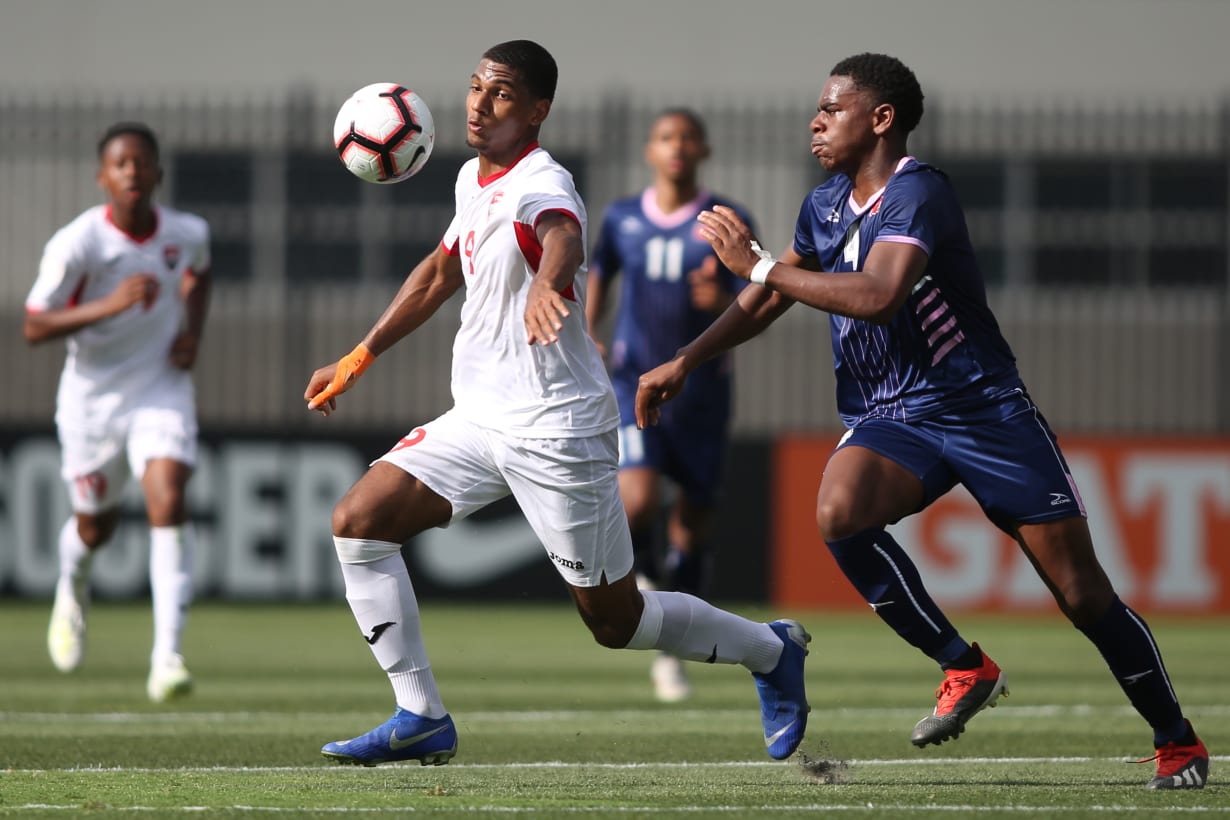 Trinidad and Tobago’s under 17 footballers started their CONCACAF qualifying campaign with a 3-1 victory over Bermuda in their opening Group A fixture at IMG Academy in Bradenton, Florida on Tuesday.

A double by former Fatima College and current Canadian-based forward Justin Araujo-Wilson in the 23rd and 38th minutes and second half substitute Andrew De Gannes in the 92nd gave T&T three valuable points ahead of their second encounter against Jamaica on Friday.

Bermuda’s Nazuri Dailey pulled a goal back for his side in the 75th and the Bermudans began to press for the equaliser. They missed a penalty which came off the post  81st minute. Panic crept into T&T’s game but John’s move to put in De Gannes paid off as the midfielder took his time and placed a low left  footer  from outside the 18-yard into the right corner at the start of added on time.

Another substitute, Curtis De Leon, who joined the team only on Monday after playing with David Nakhid’s Academy at the Madrid Cup in Spain, also put in a good shift on the right side for T&T. He was spotted by John at the TTFA Combine in Atlanta last month.

T&T should have put the game away earlier in the second half with Luke Savary blasting his shot onto the upright from the six yard box in the 58th and two minutes later Wilson went for glory, trying a shot which struck the left post with substitute Curtis De Leon lurking free inside the box.

Overall it was commendable effort by T&T on a windy evening at IMG.

Head coach Stern John was pleased for his team. “It’s a critical win for us because we knew this game was one we needed to pick up points to put ourselves in a good position to advance to the next stage,” John told TTFA Media.

“But we made hard work of it at the end. I said before the game that the key for us would be settling early and the goal by Justin helped but we should have done better in the second half to take the game away from them. We kept them in it and they didn’t lie down. Credit to them for pushing us. Then young De Gannes came on to get a third goal for us and sew up the victory,” John added.

“I think we needed to be a bit more disciplined and keep the ball a bit better but I was pleased with the way we transitioned into attack and created chances. Justin took his two goals well and should have had a third and then Andrew took his goal very well. It’s just the first win and there’s much more to do here so we’ll recover for this and get ready for Jamaica on Thursday,” John added.

T&T had eighteen shots on goal to Bermuda’s 9 with six on target. Bermuda had 51 percent possession to T&T’s 49.

Mexico defeated Jamaica 1-0 in the evening’s second encounter. El Salvador defeated Guyana 4-0 and Haiti beat Honduras 2-0 in other group matches on the day.

Four teams will qualify from the Concacaf championship for the 2019 FIFA Under 17 Men’s World Cup.