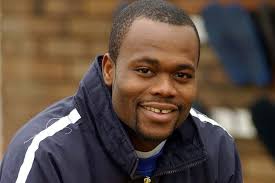 Na­tion­al Un­der-17 foot­ball coach Stern John has cred­it­ed his play­ers for the hard work and ef­fort giv­en at the CON­CA­CAF Un­der-17 Cham­pi­onship in, Flori­da, USA de­spite be­ing boot­ed out af­ter a 4-1 loss to Hon­duras in the round of 16 on Wednes­day.

In a post-match in­ter­view, the for­mer T&T strik­er now turns coach, said he be­lieves the play­ers have left the tour­na­ment with more ex­pe­ri­ence, knowl­edge and with a bet­ter un­der­stand­ing of the game. As such John has called for the team to be kept to­geth­er for fu­ture tour­na­ments, as he be­lieves the play­ers were will­ing to go out there and die for the cause.

"The game was a very dif­fi­cult one for us, I think we weath­ered the storm in the first half, we got a soft penal­ty and the keep­er saved it. The game was even­ly matched in the first half but in the sec­ond half, we came out lack­ing con­cen­tra­tion. We con­ced­ed an ear­ly goal but we man­aged to get our­selves back in the game. A cou­ple of min­utes lat­er we con­ced­ed again and we nev­er got time to set­tle, as we were just chas­ing the game. But cred­it to the boys they worked their socks off, com­ing in as boys and leav­ing as men be­cause they un­der­stand how in­ter­na­tion­al foot­ball is played now, and what is ex­pect­ed of them to com­pete at this lev­el."

John be­lieves the dif­fer­ence in lifestyles be­tween our play­ers and their op­po­si­tion con­tributed tremen­dous­ly to the re­sult of the match. "It was not easy. Most of the play­ers they played against in the tour­na­ment, play with pro league teams or are as­signed to pro­fes­sion­al teams, while most of our boys play Sec­ondary School foot­ball. It's a mas­sive gap, but I thought the boys did re­al­ly well and they should be proud."

The T&T team had just a month to pre­pare un­der John af­ter the pre­vi­ous coach Rus­sell Lat­apy with­held his ser­vices be­cause of un­paid wages. How­ev­er, John and his staff which in­clud­ed Ken­wyne Jones, the for­mer T&T strik­er, agreed to work for free and had very lit­tle time to pre­pare the team.

Yes­ter­day John said he was hap­py with the work done in the short time they had. "In a short space of time, we did not bad in the tour­na­ment, we man­aged to qual­i­fy for the sec­ond round and we were not to­geth­er for a long time, so you can imag­ine if we were to­geth­er for a much longer time and pre­pare prop­er­ly, then the sky would have been the lim­it."

John gave the as­sur­ance he will try every­thing in his pow­er to keep the team to­geth­er, say­ing the play­ers were will­ing to die for the cause.

STERN JOHN, coach of the T&T men’s Under-17 football team, has called for the squad to be kept together as they progress to the Under-20 level.

John, the ex-national team striker, was speaking after the team’s exit from the Concacaf Under-17 Championship on Wednesday, following a 4-1 beating by Honduras in their Round of 16 encounter at the IMG Academy, Bradenton, Florida, United States.

Jeffry Miranda scored a hat-trick for Honduras, with items in the 46th, 76th and 88th minutes, while Jose Aguilera got the other strike, in the 61st. Jaiye Sheppard got T&T’s lone goal, in the 57th.

“We didn’t find our rhythm (on Wednesday) and, in the end, Honduras pulled away from us,” said John. “I thought we weathered the storm in the first half and it was evenly matched. After they went ahead we got ourselves back in the game with the equaliser, but we didn’t get any time to really build on that because they grabbed the lead again a few minutes after.”

“All in all, it was disappointing but I have to give my players credit for coming here and winning two out of four matches,” said John, the T&T men’s team assistant coach. “We managed to qualify for the second round. The last two games were big learning experiences against top Concacaf teams and generally we showed what we are capable of.

“We came here and beat Jamaica in a competition, something that we haven’t done in sometime, at any level and that was a good sign for us,” John continued. “That was fantastic in terms of bragging rights but for me, I think we have to start looking beyond teams like Jamaica.

“I think now we have to build on this. Hopefully we’ll find a way to keep the boys together and have them working for the next set of qualifiers which will be at the under 20 level and hopefully some of the boys from here will continue to develop and move on to teams at a higher level outside of Trinidad and Tobago and also back home,” John added.

In other round of 16 matches on Wednesday, El Salvador and Mexico each registered 2-1 victories over Jamaica and Puerto Rico respectively, while Haiti whipped Dominican Republic 2-0.

The quarter-finals will be contested on Sunday, with the semi-finals on Tuesday and the final set for May 16.

The semi-finalists will advance to the 2019 FIFA Under-17 World Cup in Brazil.