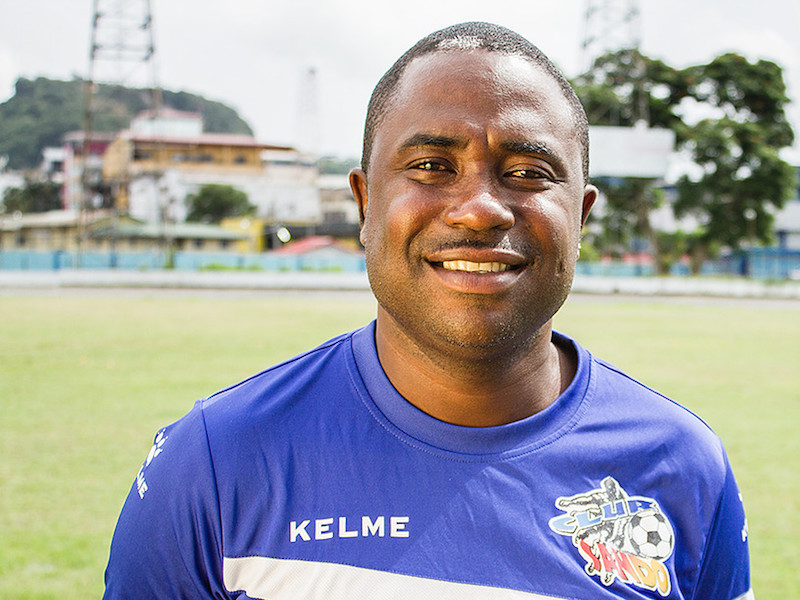 FORMER national midfielder Angus Eve has been named coach of the T&T men's Under-17 football team.

Eve, who played over 100 times for T&T between 1994 and 2005, will have Keith Jeffrey and Clyde Leon as his assistant coaches. His former T&T team-mate Clayton Ince will the goalkeeping coach, Adarryl John will be the team's trainer and Wesley Webb will serve as the team manager. The physio and the equipment manager has not been named yet.

Since retiring from football, Eve has been coaching for a number of years and has won numerous titles with Naparima College in the Secondary Schools Football League. The former midfielder also coaches Club Sando in the Pro League.

Eve gets U-17 job with Leon, Ince and Jeffrey as assistants, Look Loy sympathises with Cooper
By Lasana Liburd (Wired868).

The technical committee will decide on a team physio and equipment manager at a later date.

Eve, 47, is the most successful coach in the Premier Division era of the Secondary Schools Football League (SSFL) and a former National Under-23 head coach. As a player, he started in all three outings for Trinidad and Tobago at the 1991 World Youth Cup in Portugal, which was the nation’s first appearance at a Fifa tournament, and he retired as Trinidad and Tobago’s most capped outfield player with 117 appearances and 37 goals in the red, black and white strip.

Ince, 47, played alongside Eve at the Portugal tournament and was a member of the Soca Warriors team that participated at the Germany 2006 World Cup. Leon, 36, also has extensive international experience with 47 full international appearances and one goal for the Warriors.

The National Under-17 coaching selections rounded off the appointments in the men’s game for the short term future with all four of the national teams facing vital qualifying affairs in 2020. It also meant that Presentation College (San Fernando) head coach Shawn Cooper was the only technical committee nominee who ended up without a portfolio.

Cooper was suggested as National Under-15 Team head coach, only for board member and Referees Association president Joseph Taylor to recommend San Juan Jabloteh technical director Keith Jeffrey instead. And, in the end, Jeffrey got more support from the 13 members who were present.

Look Loy said he sympathised with Cooper but accepted the decision of the board.

“[Cooper] was the choice of the technical committee, he has a proven record in youth football and he has experience in international football,” said Look Loy, “but we live with the decision of the board and we will wait for the opportunity to reintegrate him into a national staff.

“In a small country like ours, you cannot ignore someone of the calibre of a Shawn Cooper. But in this situation, we bow to the authority of the board.”

Despite the flurry of appointments in the men’s game, the senior Women Soca Warriors are still without a coaching staff. Look Loy explained that the technical committee prioritised the teams which are competing over the next six months.

“The Senior Women’s Team had one official engagement this year, which was the Olympics—and they were already eliminated,” he said. “They have no official engagement for all of 2020; so we are focusing on the teams who have competitions. Similarly for Beach Soccer which has no activity in 2020.

“[…] It is not that they are being forgotten. There are priorities and these [other teams] are more immediate.”

Look Loy also tried to explain the TTFA’s new practice of having the technical committee select entire coaching staffs rather than just naming head coaches and allowing them to pick their own supporting casts.

“We want to bring the best possible people in,” he said. “The immediate past experience was that all kinds of people came into technical staffs via unofficial channels. So we wanted to bring what we felt was the cream of our coaching talent into our mainstream.

Eve will have Keith Jeffrey and Clyde Leon as his two assistant coaches. Former national team goalkeeper Clayton Ince will serve as goalkeeper coach, Adarryl John as trainer and Wesley Webb as team manager. The positions of physio and equipment manager will be filled in due course.

Eve, who is the head coach of Club Sando and Naparima College, last served as head coach of a national team for the Under 23 Men’s Olympic team during the 2012 CONCACAF Olympic Qualifiers and the 2011 Pan American Games in Guadalajara,  during which T&T held hosts Mexico to a 1-1 draw in the opening match.

T&T has participated in two FIFA Under 17 Men’s World Cups, the first being in 2001 as hosts and in 2007 when the team qualified under head coach Anton Corneal with players such as Kevin Molino, Aubrey David, Daneil Cyrus and Sheldon Bateau to name a few.