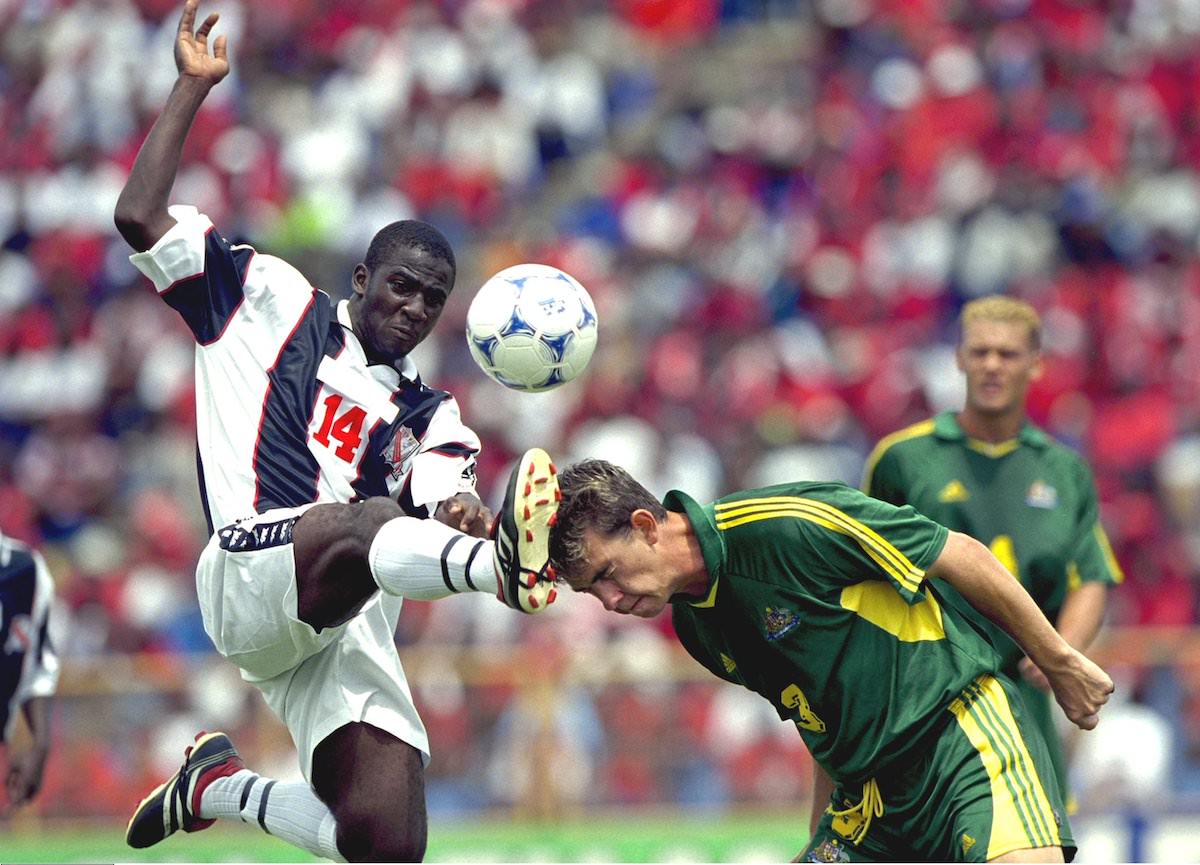 It's been 20 years since Trinidad and Tobago hosted the FIFA Under-17 World Championship, from September 13-30. The legacy of the first-ever FIFA world tournament in T&T can be seen both locally and internationally.

T&T were given the rights to host the FIFA Under-17 Championship in 1998.

According to Warner, Patrick Manning requested that T&T host the tournament, during his first tenure as Prime Minister (1991-95). “The UNC government was in power by the time it came about. It was Mr Manning’s request to (then FIFA president) Dr (Joao) Havelange, in my presence, which caused it to be groomed.”

Asked how he felt when T&T was awarded the rights to host the tournament, Warner replied, “I was thrilled, because we had to have some new infrastructure for football. That caused us to have four new stadia and that, for me, was a good achievement. By each stadia, you also had a practice ground – so we got eight new facilities, all well-maintained for this event.”

Ramsaran served as Minister of Sport, under the Basdeo Panday-led UNC government, from September 1998 to December 2001.

He said, “When I came (into the ministry), things were already starting to take shape. Under my watch, we started to build four stadia and refurbish the Hasely Crawford Stadium.”

He added, “The cost was $13 million for all four. It was not built by the Government, it was built by a consortium of companies – Royal Bank, Guardian (Group of Companies) and Mutual (Life). They got together and financed the project. They built the stadia and then they leased it to us under the BOLT (Build Own Lease Transfer) arrangement. We had nothing to do with building, just monitoring and making sure things go well.”

The eyes of the world were on T&T for the World Championship, with the talent on show, and push for sports tourism.

Ramsaran said, “I remembered making speeches at the opening of the (four) stadia, as well as Hasely Crawford (Stadium). I used the term sports tourism then and I talked about how (this) could impact positively on us.”

Jones, who was a student at St Anthony’s College, played as a defender for the T&T team during the tournament.

“It was an amazing experience,” he said. “I was representing the national team, it was a World Cup at home where I’ll get to play in front of fans, family and friends. It was a pivotal moment at the beginning of my career. I was able to experience that level of competition at my age.”

Ramsaran mentioned, “It was a fantastic experience. When you looked at what happened with the players, most of them represented their senior teams.

“T&T put up a good showing,” he added. “It was a proud moment for me, I still feel as if it was yesterday, when I see the excitement created in T&T.”

It was T&T's second appearance at a World Cup, albeit as hosts, after qualifying for the 1991 Under-20 edition in Portugal.

Jones said there was not any added pressure on the team to succeed.

“Not necessarily. It was a momentous occasion. It was pivotal for development in the country, among our young players. It gave us the chance to host a tournament of that magnitude, even though it was the (Under-17) World Cup, for the first time, to experience the world of competition in football.”

Brazilian Rene Simoes, who was the Jamaica’s Reggae Boyz coach for the 1998 FIFA World Cup in Jamaica, had replaced Chief Adedboye Onigbinde of Nigeria as the team’s tactician in May 2001.

Former St Benedict's College star Blackman scored arguably the goal of the tournament. The left-footer made a powerful run from his own half past three Croatia players before chipping the advancing goalie to make it 1-1. Forbes was T&T’s lone goal-getter against Brazil.

“(T&T’s) first World Cup goal I scored,” Blackman recalled. “I was happy. Simoes made me understand the game totally different (to other coaches). He (told) me I have size, I have speed, I’m strong, I can do things with the ball. He used to talk to me personally so I can understand defenders. I wanted to show what I have.”

About his goal against Brazil, Forbes said, “To be able to score against Brazil in a World Cup is an overwhelming feeling for me. I’m grateful to God for the doors that He’s open for me. I want the younger generation know that to put God first in everything.”

What will he remember most about Simoes? Jones responded, “Tactically, he exposed us to a new level of football. I’ll give credit to him and also the Nigerian coach we had previously. He did a lot of the groundwork for roughly two-and-a-half years before Simoes came on board. Without his involvement, we would not have been at the level that we were at, as young footballers, and being able to experience the tournament in the way that we did.”

Jones, Jan-Michael Williams, Marvin Phillip, Makan Hislop and Julius James all played international football for T&T, while a few members of the squad played for T&T at the Under-20 and Under-23 levels.

“Playing at that youth World Cup definitely enhanced my appetite for international football,” said Jones. “Through the team, I was able to experience a lot of tours. It opened up my eyes to the world of football even more. After the tournament, it quickly propelled me to the Under-20 level, the Under-23 level and even the senior team level. The tournament did spur on a wonderful generation of players that were able to go on and represent the country at (various) levels.”

Blackman, who was tipped to go on to be a star player for the T&T team, had his career cut short after a serious car accident in 2002 that almost cost him his life. His friend Lester Salcik died in the accident. Blackman had went on trials with English clubs prior to the accident and a successful career abroad had looked certain.

His captain Roderick Anthony died in 2020 in a car accident in Tobago,

“The professional landscape in the sport, when you look at the number of people that want to become professional as opposed to the number that become professional, it’s very contrasting,” said Jones. “In their situations, like every human being, (things) happen and we’re not in control of that. Every man’s destiny is not the same. It would have been wonderful for them to become the professional player on the stage that they wanted to be, but it wasn’t to be for a host of reasons.

“It’s very unfortunate that Nkosi had that accident at that time (as well as) the deceased Roderick Anthony. They were good friends of mine and it’s sad to see that they came to such points in their lives. They were both fantastic players, fantastic people (and) long may their legacy and spirit live on.”

A humble Blackman said, “I just give thanks that I’m alive. I still run, take a (football) sweat. I’ll like to do a Nkosi Blackman Fun Day where I can bring back the national (Under-17) team, a St Benedict’s team and a few other teams.

Jones went on to play, and captain, the T&T men’s team, but Forbes had spells with San Juan Jabloteh and United Petrotrin before migrating to England.

“In life you go through different hurdles,” said Forbes. “(T&T) was able to see the things I’ve done in football. I want to mention coaches like Brian Williams, Edgar Vidale, Terry Fenwick (and) Perry Gough, who took me on board with Leatherhead FC (as a player and then a coach).”

Forbes continued, “I’ve even ventured into building construction. I own the Forbes Builders Ltd Company. When I gave my life to Jesus, he has done things that only God can do. I want the younger boys to understand to have a relationship with God.”

“We always had a weak team, but I think the team was flamboyant and I think the coach did a good job based on the players he had at his disposal. More importantly, I think we played in a tough group.”

Asked what he will remember most from this tournament, Jones replied, “It’s not from the championship itself. The championship was the end point of the era. Mostly, I remember the journey to that point.

“A lot of people tend to look at the end point as their best moment but the amount of work that we had to put in as a group, going through ups-and-downs, it helped develop the characters of young men and our skillsets as footballers.”

Ramsaran remembered “some of the unknowns in world football, like a couple countries in Africa.”

According to Warner, “What stayed in my memory was the fact that we were left with four new stadia. That, for me, was the greatest thing ever.”

The maintenance of the stadia has left a lot to be desired over the years. Is he hopeful that some work will be done to restore their former state?

Warner replied bluntly, “Nothing in this country has been well-maintained, or is being well-maintained, by this government. They have a history of poor maintenance, whether it’s the roads, bridges (or) government buildings. I’m in no way surprised that the facilities at the stadia are also not maintained and they will not be maintained, especially at this point in time.”

Douglas Camacho, chairman of the Sports Company of T&T, spoke on the issue of maintenance of the four stadia built for the World Championship.

“The Government has the mandate for maintaining the four stadia,” Camacho said. “I know, of the four, the Ato Boldon is the one that’s been most actively maintained because that it is considered to be the ‘office for football’. In the case of the Dwight Yorke, because of where it is physically sited, it’s close to the Atlantic so it gets that prevailing breeze with salt etcetera. They had to do major refurbishment.

“The Manny Ramjohn probably has the best football surface in Trinidad. The track needs maintenance work and the (lighting) need work. In the case of the Larry Gomes, the major thing is the lighting.”

When is the likelihood of things being improved?

“Right now, we do not have funds to do over the Larry Gomes and Manny Ramjohn lighting,” he replied. “For the stadia to be maintained properly, there needs to be proper preventative maintenance programmes to be developed. With the current economic climate, we’re not getting even close to the funds required to maintain those stadia in the proper condition.”