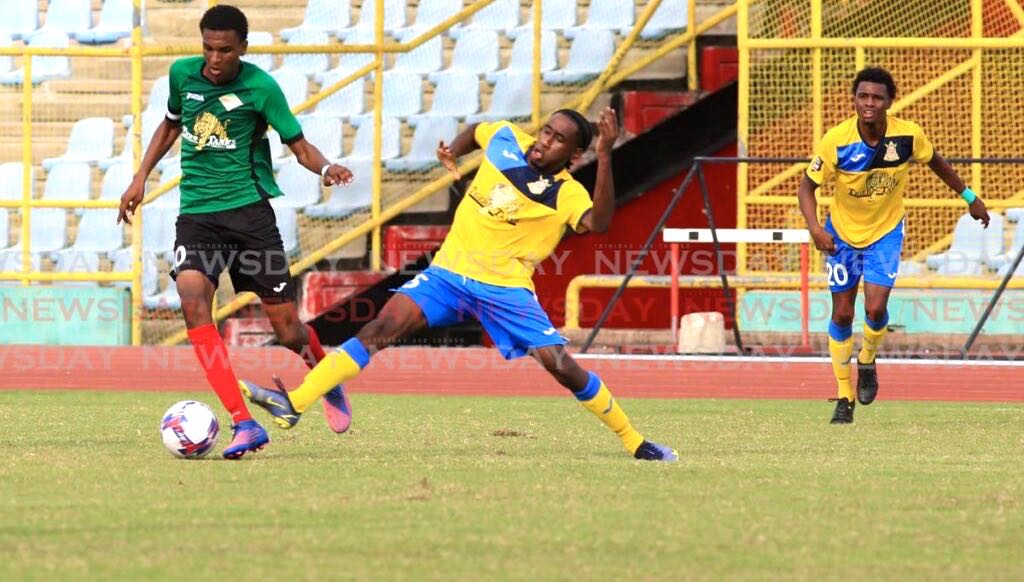 LEADERS Defence Force, recovered strongly after last week’s shock loss to bottom-of-the-table W Connection with a solid 1-0 victory against San Juan Jabloteh, in the Trinidad zone of the Tiger Tanks Under-20 Invitational Tournament, at the Hasely Crawford Stadium, Mucurapo on Sunday.

Defence Force extended their lead at the top thanks to a scrappy finish from Larry Noel in the 44th minute.

They dominated the early moments of the game and created more scoring chances than their opponents. Jelani Peters had the opportunity to put Defence Force ahead from a right-flank cross after eight minutes, but the defender headed the ball over the bar from three yards out.

Jabloteh struggled to stamp their authority on the game and failed to put pressure on the Defence Force back line. In addition to the goal conceded, they suffered an injury blow in the 45th minute when their goalkeeper Thane Devonish had to be replaced by Rajala Mitchell due to a sprained finger.

The second half proved to be more of the same as Mitchell pulled off a string of saves to prevent Defence Force from extending their lead. Jabloteh had a rare chance to equalise from a free-kick in the 84th minute but captain Dwight Jordan skied it high over the bar to their coach’s despair. Defence Force held on to claim all three points.

After seven matches, Defence Force have a tally of 18 points, followed by Club Sando and Trendsetter Hawks (13 points apiece), and Jabloteh (12).

At the Manny Ramjohn Stadium on Saturday, Club Sando were dramatically triumphant in a see-saw game against Central FC to leap into second place. Omari Asher got them off the mark in the 25th minute but Central replied with two quick goals from Akhenaton Ashby (38th minute) and Dwight Yorke (43rd minute) to go into the halftime in pole position. Nathaniel O’Garro brought Club Sando level in the 48th minute and clinched the game-winner in the 90th minute.

At Jabloteh’s expense, Trendsetter Hawks leaped into third after a 2-0 win against last week’s big winners, W Connection. Isaiah Williams headed past his namesake in the Connection goal, Isaiah Williams, to put Hawks 1-0 up in first half stoppage time. Jeremiah Williams netted Hawks’ second in the 64th minute to wrap up their fourth win of the campaign.

Elsewhere, Petit Valley/Diego Martin United claimed a slender 1-0 victory over AC Port-of-Spain at the Hasely Crawford Stadium, Mucurapo and Police shared the spoils with Caledonia AIA in a 2-2 draw at the St. James Police Barracks.

In Tobago, the two teams at the bottom of the table, Bethel United and Stokely Vale FC, played to a 1-1 stalemate while FC Tobago Phoenix beat Youth Stars United 1-0 to draw level with them on points. Leaders of the pack, St. Clair’s Coaching School, were on a bye.