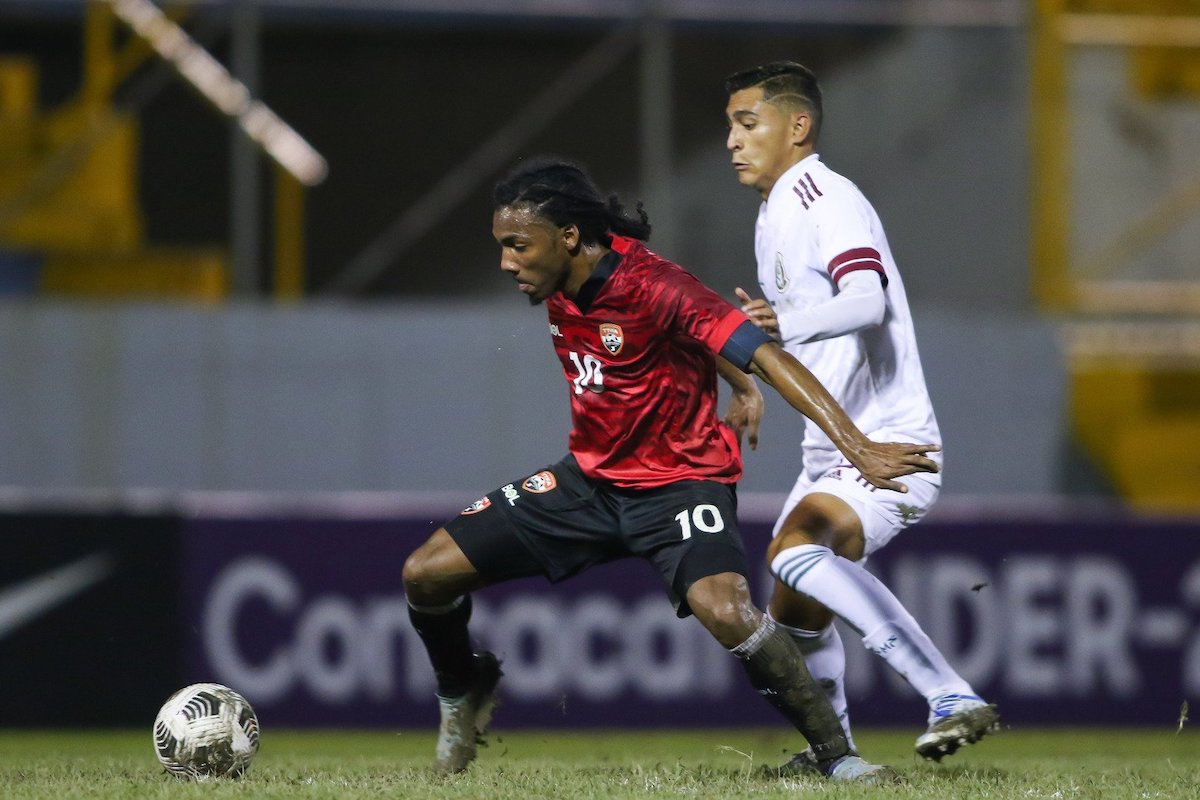 Trinidad and Tobago’s Under-20 men’s footballers need at least a point against Suriname this evening to advance to the knockout stages of the 2022 CONCACAF Men’s Under-20 Championship, having fallen 5-0 to defending champions Mexico, Tuesday night.

T&T meet Suriname at the Estadio Olimpico in San Pedro Sula, Honduras, from 6 p.m. A point (draw) will be enough to see the young Soca Warriors to the knockout round, where they are likely to meet either of hosts Honduras, Costa Rica or Jamaica.

Though T&T head coach Angus Eve knows his team can advance to the knockout phase with a draw, he is targeting full points and wants a win against Suriname.

“We are not going to think with that kind of mindset. We want to win the game and go into the (knockout) rounds on a high,” said Eve. “We going into the Suriname game very positive and trying to get a result because we are still in third-place,” adding, “When we got here, the first goal was to get out of the group and see what we could do after that. That destiny is still in our hands.”

Four different players found the back of the net as Mexico comfortably whipped T&T to pick up a second win. Antonio Leone opened the scoring in the 28th before Bryan Gonzalez made it 2-0 (45+2’) at half-time. Goals from Esteban Lozano in the 48th and 80th sandwiched a Jonathan Perez item in the 53rd, in a convincing win for the Mexicans. T&T looked good going forward, but weak defensively. Early on, both Noah Roka and Real Gill came close to scoring for T&T, before some vulnerable defending saw Antonio Leone poke the ball in from a corner-kick for 1-0.

Mexico led 2-0 at the interval after Gonzalez stabbed home a close-up chance after Jonathan Perez’s run up the right flank. The third goal came via the penalty spot, from Esteban Lozano, after defender Jaheim Joseph put in a wrestling tackle on his opponent.

Perez was unmarked when finishing a left-side cross with a close-up volley to make it 4-0 and Lozano had another open look at T&T goalkeeper Jaheim Wickham for his team’s fifth goal, courtesy a low shot.

“We thought we could have got something out of the game because the way we started for the first 35 minutes we were really in the game,” Eve noted. “We were restricting them to hitting the long ball and flicking them on and we were dealing with that adequately.”

Eve believes the Mexicans adapted better on the muddy field and exploited the spaces. “I thought the difference in the game is that one team used the conditions better than the other team,” assessed Eve, adding, “Sometimes we showed our inexperience in some of our play, in which we gave up some sloppy goals tonight again. It is a work in progress with the kids.”

Mexico’s ‘El Tricolor’ have now booked a spot in the knockout round and finish preliminary play today against Haiti, while T&T (one point) will hope to build on its opening 4-4 draw with Haiti with a win against Suriname, who are without a point after going down 10-0 to Mexico in their opening match.

Haiti (four points) used a strong second half to put the clamps down on Suriname in a 3-0 shutout to secure a first Group F win on Tuesday at the Estadio Morazan. Suriname looked an improved team and started well. They had two shots that hit the woodwork in the first half, but the second half saw Haiti come into their own and it was 1-0 in the 48th when Stevenson Jeudy thumped home a header.

A Suriname red card in the 53rd opened things up even more for Haitians and they took full advantage, with Jeudy scoring his tournament-leading fourth goal in the 59th before Adelson Belizaire capped off things in the 63rd.