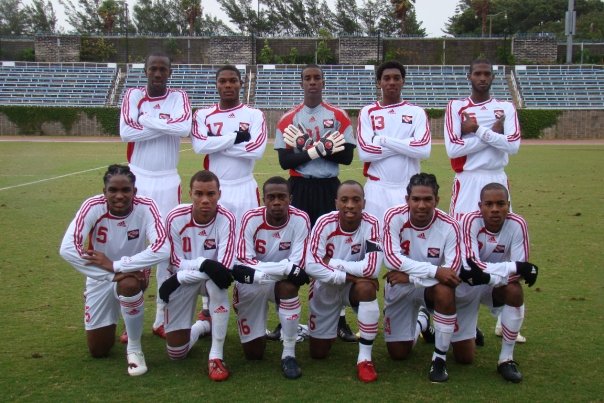 The stars of Trinidad and Tobago Under 20 team still fresh from its participation at the 2009 FIFA Under 20 World Championship in Egypt has graduated to Under 23 level and will once again take the field to do battle for their country as 2012 Olympic Qualifiers gets on the way.

No doubt the 2012 Olympic Games in Manchester is top priority for T&T, however, the young Warriors will get a chance to tune up for such tournament as they have the Pan American Games in 2010 to look forward to and the Central American and Caribbean Games (CAC) Games which is expected to kick off around mid-2010.

Current head coach Zoran Vranes and his deputy Anton Corneal will lead the charges. Zoran Vranes is a Serbian former football player who once coached of the Trinidad and Tobago national senior team in 2003/2004 and was responsible for taking the T&T Under 20 team to the 2009 FIFA Under 20 World Championship in Egypt will once again relish the opportunity that lies ahead.

Varnes also coached St Vincent and the Grenadines. He would always be remembered by that nation for the historic-win in the 2006 Caribbean Cup when St Vincent beat Jamaica national football team 2-1. It was the first time that St Vincent ever beat Jamaica at that level.

By the way, the result had some effect on the Reggae Boyz as they eventually tumbled out of competition and didn't qualify for the CONCACAF Gold Cup in the process.

Vanres also led T&T senior team to the 1996 CONCACAF Gold Cup, unfortunately, T&T played some attractive football but the results didn't go in their favor and they were sent home after just two games. But definitely a performance to remember especially against the U.S.

Though, the current under 23 team has no talent equivalent to midfield general Russell Latapy, star striker Dwight Yorke, midfielder Arnold Dwarika, keeper Kelvin Jack or a goal machine like Stern John they are definitely not short of talent and one could suspect they do have the potential to be as good or, close to the players mentioned above.

They have been together since the under 16 level and they are a very knit unit with a lot of fight in them. They are also a true cosmopolitan bunch with faces carrying the color of their national flag. Red, white and black, literally speaking that is.....

Khaleem Hyland, Akeem Adams, Sean De Silva, Jamal Gay and Robert Primus have all been cap at senior level. Not to mention talented players such as Jerrel Britto, Shahdon Winchester, Joevin Jones, Micah Lewis, Stephen Knox, Kevin Molino, Marcus Joseph and Stephen Campbell are all in the mix now. There are also a few U.S based players capable of team selection in Kyle Bethel, Javed Mohammed, Isaiah Ferguson and Chike Sullivan vying for slection and should be considered.

But it will not only be up to the young Warriors if they are to be world beaters but their coach, the fans support and also the Trinidad and Tobago Football Federation are to help collectively to put the final puzzle together. Everyone will have to play a part as the current T&T team is our future Soca Warriors.

Interestingly- T&T have never qualified for the Olympics but head coach Varnes is eager to create history as he is confident his troops will once again qualify for another big tournament. Leaving Egypt with two loses (Egypt [4-1], Italy [2-1] and a goalless draw with Paraguay head coach Zoran Varnes will hope to take it further this time around.

The Olympic Qualifiers is due to kick-off sometime this year with the Caribbean Football Union (CFU) leg of the campaign. T&T have already started preparing for the qualifiers since December 2009 when they visited Bermuda to play three exhibition matches.

Despite missing a few regulars T&T walked away 5-2 winners in the opening match against Bermuda under 23s, slip pass Bermuda's Premier Division champions Devonshire Cougars (3-2) and ended the tour with a 1-1 deadlock against Bermuda in a re-match.

In March 2010 the team then travelled to Grenada to play a friendly match against Grenada National Senior Team. Talented Tobago-born midfielder Daneil Cyrus came up late to deny the host of any victory as the young Warriors walked away with a 1-1 draw.

In April 2010 Daneil Cyrus again had to rescue his team against Pro Leauge outfit Ma Pau SC in a 1-1 tie at the Larry Gomes Stadium. Ma Pau had taken the lead in the 18th minute though Kevin Molino who, by the way is also a member of the current U-23 team but decided to run out with his professional team instead. Cyrus converted a 66th minute penalty which was enough as both teams held out for the tie.

With a wealth of experience behind them having played friendly matches against Australia to Nigeria then gracing the under 17 and under 20 world championships respectively now what's next for the young Soca Warriors. Well, I guess we'll just have to wait and see.

Keep in mind the team is capable of springing a few surprises as they have shown in the past that they are no pushovers. Good luck T&T, may your journey bear fruits- remember, within a seed there is a potential for a forest. The future lies with you.