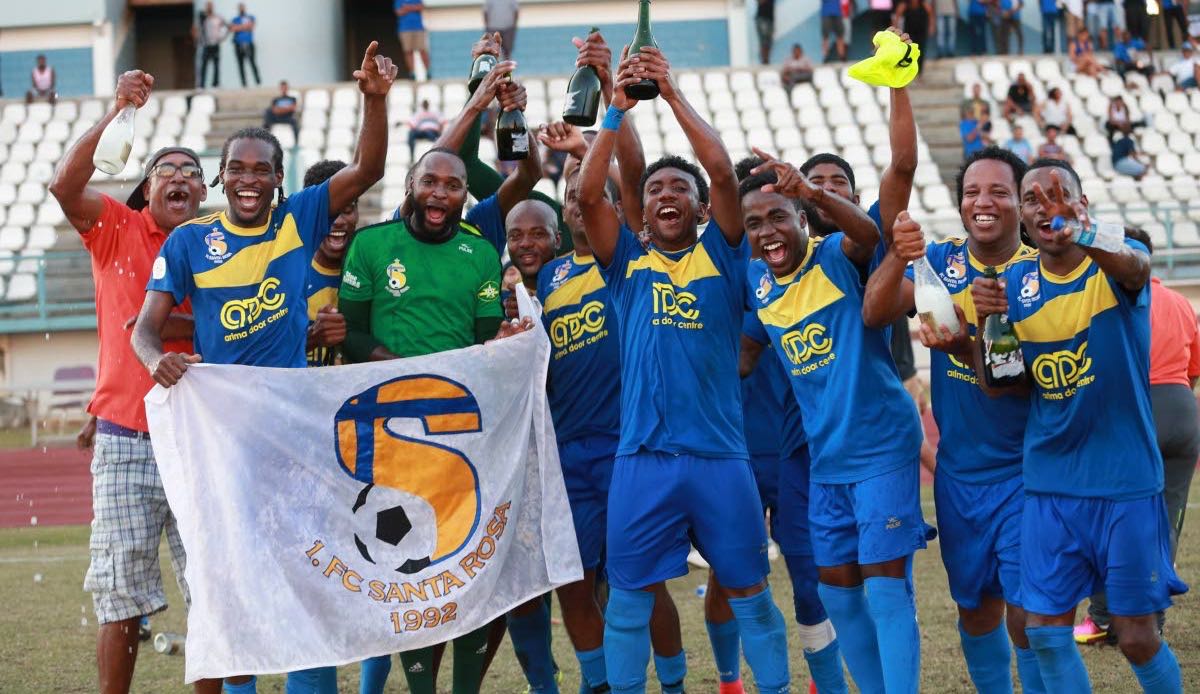 FC Santa Rosa captured the 2018 TT Super League title yesterday, by virtue of a 1-1 draw against Cunupia FC in their final round match, at the Larry Gomes Stadium, Arima.

Needing only a point to officially dethrone Guaya United as the league champs, the Arima-based Santa Rosa outfit took the lead in the 32nd minute courtesy of a strike from Akeem Garcia.

But Kevon Woodley netted his league-leading 23rd goal for the season, in the 39th minute, to ensure a share of the points for both teams.

Nonetheless, the point was good enough for Santa Rosa to seal the title.

The crown was the first, at the Super League level, for debutant Santa Rosa coach Derek King, who took over the tactical duties from club owner/league president Keith Look Loy during the off-season.

“It’s a joy for me to win a title, my first Super League title, as a coach,” said King last evening. “Everything is possible through the grace of God.”

King admitted that his players showed signs of nerves early in yesterday’s contest. “Last year, in the last game of the season, is when Santa Rosa lost the league. We weren’t ourselves in the first half but, most important, we did it for the Arima-based fans because we had one of the best followings in football in Trinidad and Tobago.”

He added, “I think they were really eager to win the title this year.”

This is the second major league trophy for the 38-year-old King, as he led North East Stars in a successful 2017 TT Pro League campaign.

“It’s always a great achievement for a young coach,” King noted. “As a coach you never stop learning and you always set goals. It was important, with the support of my family. They’ve been in every single game, including the games in Tobago.

The League Cup semi-finals will be contested on December 9, at the Arima Velodrome.

Santa Rosa will tackle Cunupia at 7.30 pm but, in the opening game of the double-header, Queen’s Park will meet Petit Valley/Diego Martin United at 5 pm.

According to King, the ex-national men’s team defender and assistant coach, “We have one more hurdle which is the knockout. We’re playing Cunupia again. As I told (my players) we have two more ‘finals’ which (are) the semi-final and the final.”

Queen’s Park stayed in second spot despite a 3-1 win over Club Sando at the Fatima Ground, Mucurapo.

Devon Modeste netted twice for the Parkites, in the first and 69th minutes, and Benedict Barrett got the other item in the 31st.

Jamal Burke (eighth) and Kevon Jessop (40th) were on target for Club Sando.

In a high-scoring affair at the Curepe Recreation Ground, Matura ReUnited got the better of RSSR 5-4.

Kerron Mitchell (12th and 30th) scored twice for RSSR, with Hakim Gulston (42nd) and Anthony George (60th) getting the others.

UTT registered a 2-1 win over Guaya United at the Guayaguayare Recreation Ground. Dike Wilson (27th) and J’Deem Parris (48th) were the goal-getters for UTT, while Keston Frontin (68th) got the consolation for the hosts.

Chris Collins scored a pair, in the 48th and 64th, as Police earned a come-from-behind 2-1 victory over Petit Valley/Diego Martin United,at the Police Barracks, St James.

Quincy Charles netted for the visitors, in the 37th.