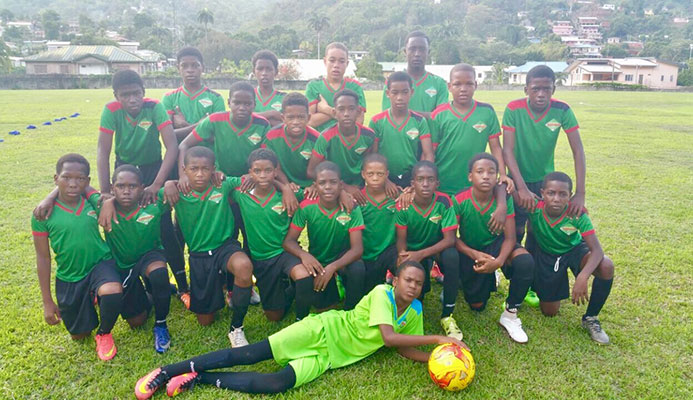 San Juan Jabloteh finished champions of the Flow 2017 Youth Pro League Under-13 division on the final day, yesterday, becoming the first club in the history of the league to win all divisions of the YPL three times in a row.

The history rewriting 'triple triple' champion club won Under-15 division, with two games to spare, on June 25, and a week later (July 2), secured the Under-17 crown on the penultimate day.

And yesterday, the final day of the 2017 campaign, the San Juan Kings U13s, with a 2-0 win over Defence Force, were celebrating as champions too, securing another historic moment for a club that have lifted the bar once more.

Jabloteh U13s, a side on 12 straight wins, needed nothing less than another victory after Police FC, the only side with a shot at upstaging them for the title, went ahead by three points before kick-off with a win by default over Morvant Caledonia United at St. James Barracks.

But with a helping leg, Jabloteh went ahead in just the second minute against Defence Force though an own goal by defender Brendon Ramjattan, who inadvertently put an attempted clearance into his own net at the San Juan North Secondary School ground.

Half hour later, Tyrell Inniss, with his first goal of the season, cushioned the eventual champions 2-0—a result they took to the final whistle. Jabloteh (49 points) finishing ahead of Police on a superior goal difference (+88/+54).

Police, creditably, had given a superb run this season, but when the dust settled yesterday, only one champion team stood tallest. Ironically, Jabloteh, led by a double from this season’s record-smashing scorer Nathaniel James (40 goals in all competitions), had defeated Police 4-1 on June 11, overtaking the Blues for top spot and held on till the end.

Yesterday, Jabloteh U15 and U17 champion sides also ended the season with wins, defeating Defence Force 2-0 and by default respectively.

San Juan Jabloteh technical director and senior team head coach Keith Jeffrey praised the work of Dave Weeks (Under-13), Andre Morales and Junior Neptune (Under-15), and Gilbert Bateau (Under-17) and for believing in the club’s philosophy.

“For a long time people will continue being envious of what we have achieved as a club,” Jeffrey said of Jabloteh, who won all divisions in 2015, then raised the bar by successfully defending all age groups in 2016, now doing so again 2017.

"As the technical director I have set certain standards that we are to work by in keeping with the Jabloteh philosophy," continued Jeffrey. "And its also great to see that even the new coaches (Andre Morales and Junior Neptune) have bought into the Jabloteh way, and together with the players we are celebrating an incredible achievement."

All winning teams of 2017, will be honoured at Thursday’s FYPL awards ceremony which would also reveal individual top performers. But for the near two hundred plus youngsters that make up the San Juan Jabloteh youth programme, nothing can beat the new ‘triple triple’ record they have achieved.