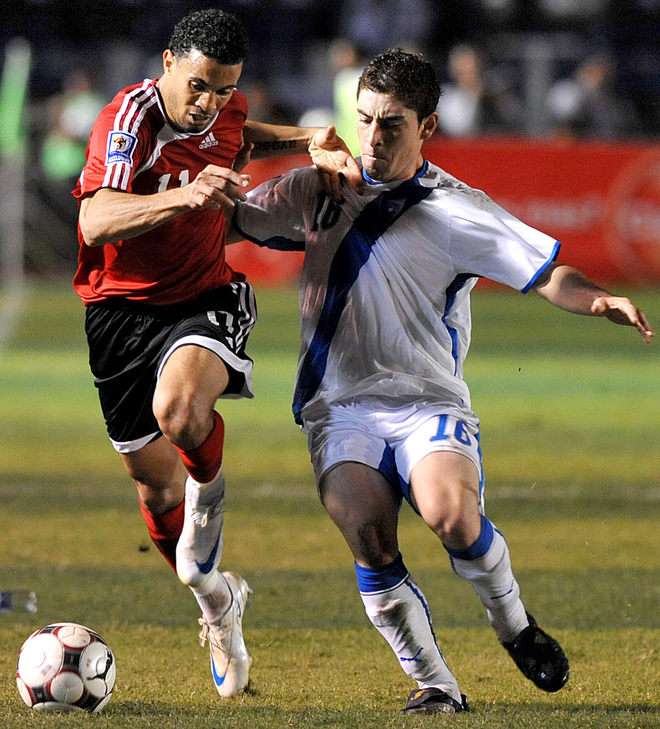 Both the Trinidad and Tobago and Jamaican national teams are in town for tomorrow’s encounter on the final FIFA international matchday for 2013.

The two teams arrived in Port of Spain on Saturday night from Montego Bay and are based at the Capital Plaza hotel ahead of the match billed as the “Caribbean Classico”.

They will undergo their final training sessions at the Hasely Crawford Stadium this evening. Also in town is Ipswich Town midfielder Carlos Edwards and Port Vale midfielder Chris Birchall who will be appear in tomorrow’s match in an official sendoff, having retired from the international game earlier this year.

“It’s great to be back and to be appreciated by the Association and the country. I’m always excited to play before the home fans and even moreso after the boys pulled off the win on Friday,” Edwards told TTFA Media.

“I know for a fact Jamaicans hate losing and they will be coming very hard at us on Tuesday to even things up. I haven’t played much against them in the past but having been around our national team for so long, I know the rivalry is one of the biggest in football when you look at all the Confederations… so in saying that, there is definitely a lot at stake,” Edwards added.

Finland-based midfielder Ataullah Guerra, the scorer of T&T’s winner on Friday, believes T&T can reproduce their winning performance but wants the local fans to be part of it.

“It was a pleasure to score for my country. It’s been a while since we beat them in Jamaica so it was a great honour for me and the team,” Guerra added.

The former San Juan Jabloteh player noted though that even after the goal was scored, he did ask skipper Kenwyne Jones why he didn’t play the initial ball to him before the Stoke City forward went for goal.

“I was so anxious and I was looking for him to pass the ball to me but he was also in a good opportunity to shoot and I was in the right spot at the right time to follow up.”

“It was a tough match for us. We played to the coach’s instructions and to our strengths and we got the result we wanted. But this game on Tuesday will be much harder because we put ourselves in a position now where we have to show our commitment to maintain a winning performance. They knew we beat them at home and they will not come here to lie down. They will be fighting down to the final whistle,” Guerra added.

Also coming into the squad for tomorrow’s match is North East Stars player Trevin Caesar, while Sheldon Bateau and Justin Hoyte have returned to their clubs in Belgium and England.

Meanwhile, Trinidad and Tobago head coach Stephen Hart  praised his players for securing their 1-0 win over Jamaica in Montego Bay on Friday night.

Hart said the effort of the players was second to none, commending skipper Kenwyne Jones and his teammates for weathering the second half storm from the “Reggae Boyz” who went in desperate search of the equalizer.

“It was a game of two halves really. I thought we started really well and we played an exceptional first half. We created some good chances in the first half and we did a lot of things well,” Hart told TTFA Media.

“But we panicked a bit in the second half and gave the ball away. Jamaica were winning the ball and putting us under pressure and playing the ball forward quickly. We gave away a lot of set-plays and neutral people might say they deserved a goal.

But in the end, a creditable showing for us. We had a brand new back four who had never played together before and we came away with a clean sheet away from home,” Hart added.

“It was a very competitive game and this is what I’ve been asking of the players,” he ended.