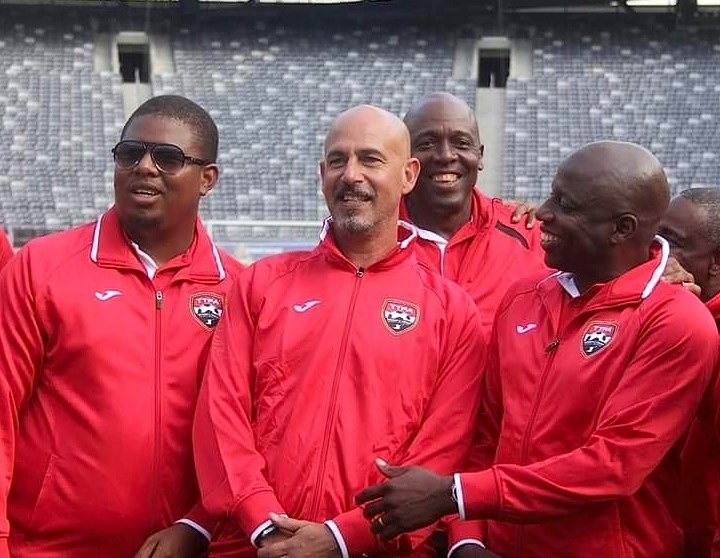 You've heard of migraine, chronic, cervicogenic, cluster and tension headaches, all of which are treatable, but are not liked by anyone. However, there is a headache out there, if you can find it, occurs to be the only one that particularly coaches would singularly pray for, and it's called, a selection headache.

Now you've probably heard of Joe Hart, Eddie Hart, Kevin Hart and if you are relevant with T&T politics, to an extent, the corrupted Canadian-born Calder Hart, of course no relation to Stephen. Until 2008, the soccer world knew little of Stephen Hart at the international scene. Well, times have changed and today Stephen Hart is a household name in the mouth of every Soca Warrior fan.

He has been the T&T head coach for a little over two years and with finite resources the La Romain-born coach still managed to build one of the deepest squads we've ever witnessed in the history of T&T football, noteworthy, in the middle of the pack?

A year ago, anyone who asserted that Trinidad and Tobago national men's team would have a crisis in midfield entering the 2018 FIFA World Cup qualifiers would have been met with a skeptical eye from coach Hart. Considering that his players were literally falling on and off the field, local fans could have been on to something, certainly not what they were expecting and, in the shortest of time.

T&T's next set of important matches are carded for early September and all eyes will be drawn closely on Stephen Hart's final team selection, his catch-22, so to speak. Even the coach himself will be scratching his head at this one.

The trouble-free thing for him to do would be to write down his players' names on individual pieces of paper and draw names like the lottery wheeling system, but that too is burdensome.

You've heard the saying; “own the midfield, you own the game”. Lately, T&T has been benefiting from a rich flow of talented midfielders coming through its ranks and now with an expansion of talent filtering through, T&T could be set to spring into a level that would unlock any defences in CONCACAF if Hart can get them to peak at the right time.

Although, it was not all smooth sailing for the T&T gaffer. For example, Hart's go-to maestro Khaleem Hyland had been inactive for a long period while still a K.R.C. Genk player and only reignited his club career via the national set-up.

Joevin Jones was a fulltime left-back and had to hold back his natural flair at times to pick up defensive duties.

While newcomers Neveal Hackshaw and Trevin Caesar were borderline players that were kept in Hart's pocket as back-ups.

In-addition, T&T was hit with jaw dropping injuries to regulars Keron Cummings, Kevin Molino and Hector Hughtun. Now anyone that knows of the trio would tell you that their talent is invaluable to any team they play for.

To add insult to injury, the variable of Ataulla Guerra and Lester Peltier plays also added to T&T's miseries.

The only undeviating performers were Kevan George, Cordell Cato and of course Andre Boucaud, in-fact, if any had gotten injured the result could have been ruinous for T&T.

A year later, T&T is now left with a mammoth problem, something only one man has the keys to unlock and that's coach Stephen Hart. He has the most welcoming headache any coach could ask for and if his employers grant him a fruitful summer he could be stuck between a rock and a hard place come September.

Let's have a look.

Hart saw Hyland's in-active situation as a good thing and used that to his advantage. He rewarded the player with some valuable playing time with the national team and before you knew it, the former San Juan Jabloteh stand-out was back to being his old self, shortly after, he was snapped up by KVC Westerlo. A massively underrated player who quietly goes about his work of shielding the defence line in an otherwise adventurous midfield.

Today, Hyland is a linchpin with the national team and the only player that is capable of successfully connecting the dots, especially long-range efforts when up to it. On the opposite side of Hyland lies a totally different player in Andre Boucaud. The conventional centre midfielder is very calm and composed and uses the short pass technique to complete the dynamics between both in midfield.

Then you have Keron Cummings, a man that was brought in to replaced the injured Kevin Molino and he never looked back. Cummings quickly became the blood vessel of T&T's attack. A player who is remarkably adept at keeping the play ticking with his simple but yet incisive passing. Not often do you see a locally based player getting the notch over a regular foreign based player.

His success was short lived though. In late December 2015, the North East Stars player was shot in his leg and everything went tumbling down for T&T. The incident had peril effects and had simulated T&T of some sort as days after they were knocked out by Haiti for a place at the 2016 Copa América Centenario.

Cummings has now made a miraculous recovery and has begun training again. No one knows if he'll ever be the same, but if you are a true T&T fan, this is one player you would certainly pray for to get better soon. He's that good and he's naturally left footed, a rarity in T&T.

Orlando City's Kevin Molino is also back from a season long injury and is returning to his old self again. He has already scored for both club and country and seems to be improving at a rapid rate. He is determined and looks passionate about returning to where he left off.

W Connection's Hughtun Hector is beaming once more and doesn't look like a man who was injured for over a year. He has already claimed his starting role with W Connection and was one of their stars in their recent CFU Champion Cup matches.

Since getting re-positioned to the left and right-wing positions we, have all seen the best of what Joevin has to offer, kudos to coach Hart for making the move. Joevin Jones adapted seamlessly and has been a live-wire and T&T's most creative and skilful performer from anywhere in midfield. Since moving to MLS, the player has made leaps and bounds, and while still only 24, T&T could benefit from his talent for years to come.

Ataulla Guerra and Neveal Hackshaw have moved abroad to Charleston Battery and they will definitely improve. Hart seems to have found favour in Hackshaw, who seems to be settling pretty well into the T&T system, sadly, at the expense of his new team mate, Guerra, though, he's more defensive of the pair, he brings overall value to the team.

Then you have Jomal Williams and Sean De Silva that are both very close to sneaking onto the T&T team, especially, De Silva. The Central FC player-maker is capable of connecting passes successfully. Not a big dribbler of the ball, Sean has shown great maturity and composure and has an eye to thread passes easily, we saw that versus St Vincent. As for Jomal, the man has already scored 11 goals from midfield for W Connection and has been one of the club's most consistent performer thus far.

And finally, T&T's two latest additions are teenage sensation Levi Garcia and English-born John Bostock. Both players are skillful and fast enough if they gallop at almost any defenders they could put them in a vertiginous feeling. Bostock's energy and power make him a significant alternative. We've already seen what Levi could do while Bostock is just licking his chops with enthusiasm for a taste of international football. Two players that are still literally unknown in CONCACAF could very well be T&T's secret weapons should the Panmen make it into the Hex.

The Kevan George situation of being club-less for a while would have been a very big loss if the defensive midfield stalwart did not find a club soon. Despite his small frame, he packs a lethal punch, he adds steadfast to T&T midfield and a good protector of the back four proving that he is indeed one of the foremost defensive midfielders on the team right now. Between now and September things could surely change for the better once he continues to progress for his new club Jacksonville Armada FC.

DC United's Nick DeLeon, if he ever makes it to T&T, could be another option for coach Hart. Nick plays a good wing position and can dribble his way into the area and shoot accurately, however, the deep lying position DC has him playing is doing him little approbation. But then, if he masters it, he could very well slip into George's position if things don't change quickly for the iron-man.

Speaking of which, there are two hiccups in Hart's jigsaw puzzle. The decline in speedster Lester Peltier's performance that has not only left the winger unemployed but also uninterested in the sport. It was reported that because of some family-related issues have affected his move to Irtysh Pavlodar in the Kazakhstan Premier League. Peltier went from being one of T&T best right wingers to a drop out in a space of 2 years. Hopefully, he'll regain his magic soon.

Obviously he's just one person so going to every local game would be impossible, however, coach Hart still takes the time to catch weekly top Pro League and SSFL matches and recently mentioned that he has pure admiration for a few young midfield attacking players in the leagues such as Aikim Andrews, Kadeem Corbin, Tyrel Emmanuel and Quinn Rodney. From an outside look Noah Powder and Duane Muckette are also ones to keep any eye on.

As mentioned above, if Hart is given a few extra games over the summer to fine tune his team before September, one could expect to see even more talent emerge.

Either way, Stephen Hart certainly has his work cut out for him.

"Coach Hart said that: "Each one of these players play a different role and everyone is important to my plans and the team. Some are used in different situations according to opposition."