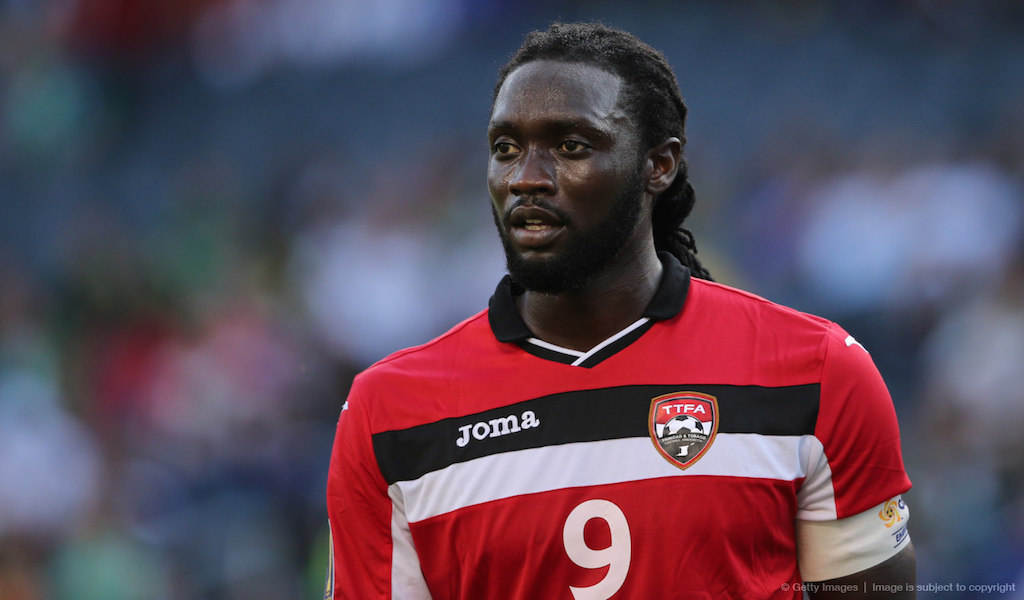 Trinidad and Tobago skipper Kenwyne Jones says his fitness level is on point and he’s raring to lead the national team in Friday’s World Cup qualifier against Guatemala, also issuing a signal to local fans to not wait until the team is nearing qualifying before getting on board the “Road to Russia” campaign.

Jones was speaking on Saturday as he looked ahead to the start of a live-in training camp today (Sunday) with the Trinidad and Tobago 24-man squad ahead of Friday’s encounter which kicks off at 7:06pm at the Hasely Crawford Stadium. Both he and head coach Stephen Hart issued rallying calls as the “Red Army” attempts to secure its passage through the Concacaf hexagonal stage which commences in November.

“Don’t wait ’till we qualify. The team has been doing well for the past three and a half years, making steady progress and I believe we been giving a product for the nation to be proud of. This is a big game just like those of ’89 and the 2006 games,” Jones said on I95.5 FM on Saturday night. “The ticket cost is less than that of a boat ride so there is no excuse for fans not to fill the stadium.”

The current Central FC player who has played for teams such as Stoke City, Sunderland, Southampton and Cardiff City, made it clear that his T&T troops know very well what their mission is.

“I’ve already had that conversation with them (players) so they know what they rewards can be. We know that we have a lot of work to do and a long way to go still before we qualify (for the World Cup). Even though we have done so well in the group, no game is an easy game and we expect to always have a fight on our hands. I think the team is well prepared to go through the all the ups and downs as a team. We have matured over some time as a unit and I am quite confident in my group,” Jones said.

And Guatemala will be no exception when it comes to feeling the wrath of the “Warriors” particularly on home turf.

“We also have some fire in our bellies. In some way we have a recompense for Guatemala … for the way we were treated in Guatemala. Yes we know it’s all part of football but we are fired up for Friday,” Jones stated.

For the first time since 2004 when he joined Southampton from W Connection, Jones is not joining the national team camp for a World Cup qualifier following an overseas trip. His loan deal with Central FC meant that the big forward did not have to undergo long hours of flying from Europe.

“Of course there is going to be a difference but at the same time I haven’t been training with the national team so this week is still very important in terms of us coming together as a team again. I am fit but who knows, you don’t know what a game will call for. I have the advantage of not traveling long hours anymore to come to play but there is still the preparation to be done before the match.

“The fact that I am still here and playing is the most satisfying aspect of my career.Sometimes even though you still have the age and form, because of the direction of a team, things change and I’m happy that I was given the opportunity to be here still and given the opportunity to lead the team and hopefully that can continue,” Jones added when asked about his most satisfying aspect of his career to date.

Hart will begin his sessions on Monday at the Hasely Crawford Stadium while Guatemala will undergo their sessions at the Larry Gomes Stadium before their one-hour session at the match venue on Thursday.

The National Head Coach also issued a call for the 12th Warrior support on Friday.

“It has always seems to be the one one missing element in our football and in our psyche… our set up in general,” Hart said.

“We have a tendency to like it only when things go well. It’s real life, you have good times, bad times and times when you need to to fight. And when you really suffer to get the result and then you get the result, the joy that comes from achieving that is something that personally drives me. The support of the people… we can’t say enough of how important that is,” Hart said.