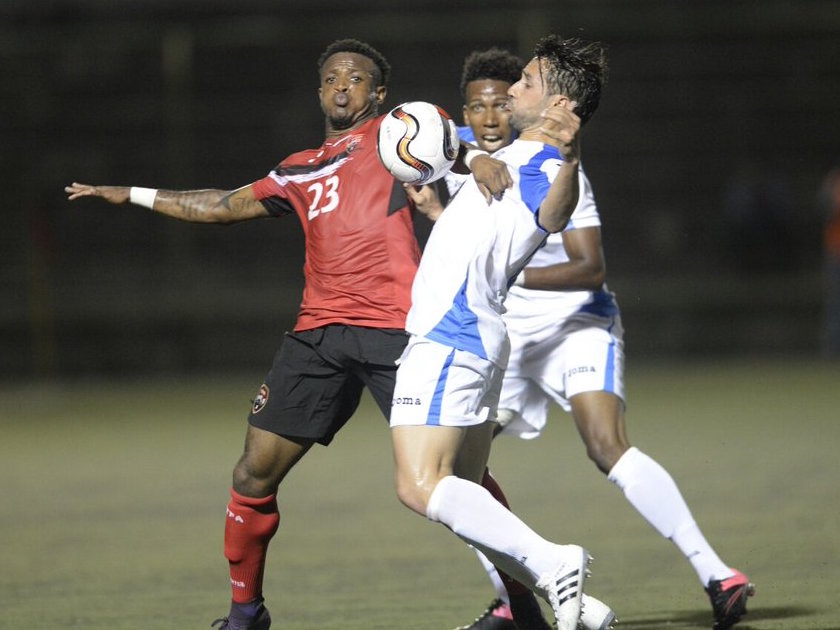 Trinidad and Tobago’s senior men’s team went down 2-1 to Nicaragua as they conceded early goals on either side of half time in the first of two international friendlies at the National Football Stadium in Managua on Tuesday night.

Playing before just over 6,000 fans at the FIFA Goal Project football stadium which the hosts uses for all its international matches, the home team surged ahead in the 3rd minute when Luis Peralta was left free inside the box and headed downwards past Adrian Foncette from a left side delivery.

The early goal surprised T&T which was playing with two debutants in its starting team, Club Sando forward Akeem Roach and W Connection defender Maurice Forde. Skipper Carlos Edwards made his first start since 2013 while Radanfah Abu Bakr, Aubrey David, Jomal Williams and Hughtun Hector all got starts as well. Defenders Carlyle Mitchell, Daneil Cyrus and Cornell Glen were on the bench at the start but both made second half appearances. Aikim Andrews was not in the squad, after staying back in Trinidad due to a passport issue and Kevan George arrived from Jacksonville on Tuesday night.

The first half was not bright for the visitors as head coach Tom Saintfiet, in his first match in charge of T&T and in his 50th FIFA international outing as a head coach, observed the 4-2-3-1 formation in a game situation after two weeks of preparations. Defence Force forward Hashim Arcia was the second forward and he would later pull a goal back for T&T with a well taken item in the 76th minute.

Fondete conceded again just after the restart when Daniel Cadena struck a volley from roughly 35 yards out which beat the custodian all ends up after initial appeals for a hand ball offence on the goalscorer.

Saintfiet introduced Glen and Tyrone Charles in the 54th minute and both injected some life into the T&T attack. Charles delivered one from the left with the outside of his right foot which Glen just missed out on latching onto well into the area. And the Charles would later unleash a right footed free kick from 20 yards out which clipped the crossbar.

Daneil Cyrus came into a midfield position in the 80th alongside another substitute Curtis Gonzales while Trevin Caesar replaced Nathan Lewis in the 66th.

Foncette had one further save to make as the match winded down with T&T unable to level the scores leaving Nicaragua with the 2-1 victory.

Both teams will meet again on Friday as T&T continues its build up towards the CFU Fifth place playoff matches (Gold Cup qualifiers) against Suriname on January 4th and Haiti on January 8th at the Ato Boldon Stadium in Couva.

“As a coach you don’t like to lose. I am disappointed with the result but I can’t be too disappointed in the performance of the team. Nicaragua were full strength and naturally we missed a lot of players. We gave some opportunities for players to make their debuts with a lot of young players in the squad and it was the first game after only two weeks in training together.

“First half I think it was a neutral game. Both team didn’t really create chances and it was a little bit sad that Nicaragua scored immediately after a few minutes. It was a goal out of a standard situation with two players didn’t follow instructions of what was done in advance.

“The second half we wanted the make the equaliser but surprisingly they scored out of first of all, a hand ball in the midfield, but secondly, a world class goal with a player shooting from 30-40 metres. We were now pushed to score two goals.

“Tyrone Charles came on and did well. He hit the cross bar with a fantastic free kick and then he had a good cross. We had a chance to make it 2-1 but it didn’t happen. Then Hashim Arcia scored a good goal 15 minutes from the end. We tried to press more and we had some good occasions. Also Cornell Glen played very well, was pressing a lot and we tried to go for 2-2 and of course it means the opponent could have some chances as we opened up a bit at the back.

“It was also difficult on the artificial pitch but we can’t change that surface. It was a very disappointing result but a satisfying performance for the first time of this team. Sure there were some weaknesses which we have to improve on and be ready for the future for the most important games against Suriname and Haiti and then Mexico and Panama.

“I am a football coach who likes to look into the future. I saw a lot of good things. I saw a committed team which played very well in the organisation, which made some small mistakes that the opponents scored out of. I think it was a decent start with disappointing result,” Saintfiet stated.