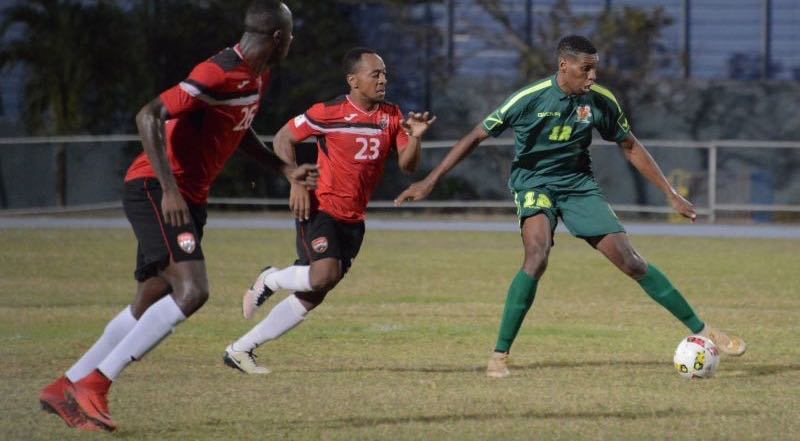 A 29th minute goal from German 2nd Bundesliga Club Darmstadt 98 new signee Joevin Jones was enough to seal a 1-0 victory for T&T over Guadeloupe at the Pierre Antonius Stadium in Guadeloupe, yesterday.

The in-form left wing-back has already racked up 3 goals for his new club in 9 starts and is carrying over his goalscoring form into the national team quite remarkable.

T&T has not lost to their French neighbours since 1989 and Joevin's 29th minute item in-front of 2,500 screaming fans were enough to protect it's favourable record over Guadeloupe and give coach Dennis Lawrence his first away win in 14 months as head coach.

It was reported that both T&T and Guadeloupe finished the game with 10-men after referee Jean-Pierre Janvilliers dished out two direct red cards for an altercation between T&T's Leston Paul and Guadeloupe's Dimitri Bolivar.

Guadeloupe's coach Jocelyn Angloma, told it's official website (liguefoot-guadeloupe.fff.fr): "As I said in the week, the main thing was not to be ridiculous. We have not been. The players responded even though the team opposite was of a higher level. It was important that the fans see the potential of our young people. They applauded while we lost. It means something. Now, these young players must believe in their qualities and work."

Trinidad and Tobago will end their French Caribbean tour tomorrow when they face Martinique from 6pm in that country.

Trinidad and Tobago’s Senior Men’s team got their first victory of 2018 with a 1-0 victory over Guadeloupe there on Friday night.

The winning item came off German-based defender Joevin Jones and turned out to be head coach Dennis Lawrence’s first victory on the road since he became head coach last year.

In the 5th minute, Leston Paul with the first real chance of the match after good work by Levi Garcia on the left flank.
The opening goal came when Nathan Lewis eluded two defenders and shot to goal, allowing Jones to pounce on the rebound.
On 54 minutes, Garcia made a spectacular run from half line before seeing his shot crash off the crossbar.

Defence Force’s Reon Moore made his international debut, replacing Garcia in the 66th minute. T&T meets Martinique in Fort-de-France on Sunday from 6pm.

The visitors went on the attack early and in the fifth minute, Leston Paul produced the first real chance of the match after good work by Levi Garcia on the left flank.

However, the game's opening goal came when Nathan Lewis eluded two defenders and shot to goal, allowing Jones to pounce on the rebound and scored in the 29th minute for 1-0 first half lead.

In the 54th-minute, Garcia made a spectacular run from the half line and unleashed a powerful shot which crashed off the crossbar. Defence Force’s Reon Moore made his international debut, replacing Garcia in the 66th minute

The Soca Warriors will meet Martinique in Fort-de-France this evening from 6pm.