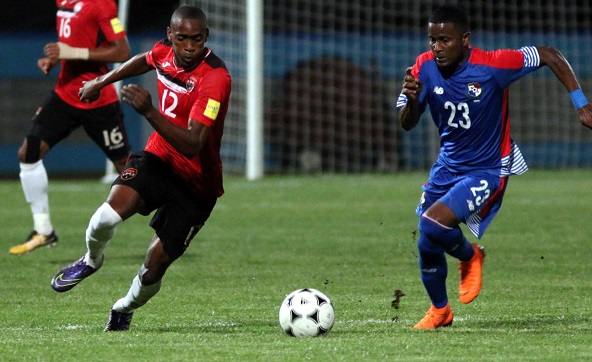 'Not ready' was how national football coach Dennis Lawrence described his young players' following Tuesday's 1-0 loss to Panama in an international friendly encounter at the Ato Boldon Stadium in Balmain, Couva.

The young T&T Warriors held their opponents goalless until the 93rd minute when a defensive blunder by captain Daneil Cyrus on the right side of defence allowed Alexis Palacio to whip in a low cross for Josiel Nunez to turn in past Adrian Foncette, just when the game seemed heading for a tie.

Lawrence's concerns began as early as the first minute of play when Carlos Small was put through an open T&T defence and Foncette, despite his hesitance to charge at him initially, was able to keep out his attempt eventually. Otherwise the local team failed to show progress while possessing the ball and showing an inability to score at the same time.

Lawrence in the post match press conference said a victory was never on the cards for his team, although he didn't feel they deserved to win or lose the match. But he was clear, however, that many questions about the country's young players' readiness for international football were answered, saying they are not technically sound.

Though for most of the young players it was their first attempt at international football, Lawrence said, "It is obvious to see what qualities some of the players can offer and I think some of them have hit their levels, they cannot go the extra bit that is required. But at the same time a lot of them are still young and we have to work with them to improve them from that aspect, but based on the game tonight, some of them are not ready," Lawrence said.

He added, "I cannot see them displacing any of the more senior, foreign players who would come in on a match basis."

Lawrence's concerns Tuesday were numerous and included erratic passing of the ball to lack of concentration, to the inability of players to receive the ball in the middle of the park and either make a progressive pass or be creative. It was this limitation that restricted the home team to just one real chance of at goal in the 10th minute, when Hashim Arcia found room on top the box from Alvin Jones right side centre, but he lifted his shot high and wide of the target.

Other than that the visitors created many scoring opportunities and should have hit the target when Palacio delivered a pin-point cross to Jose Fahardo inside the area, but his header was somehow scrambled wide by the outstretched arms of Foncette in the 58th.

Later Francisco Palacio benefited from a goal-mouth scrimmage when the ball bounced invitingly for him in the 77th minute, but he fired wide, with the goal at his mercy. Lawrence's search to find players to fit into his structure only further weakened his team in the final 15 minutes expectedly, with the Panamanians relentless in their attacks.

The lanky national coach promised he will continue to develop players as his job demands, but he echoed another troubling concern which is to keep the young players active with the T&T Pro League still in doubt.

DENNIS LAWRENCE, T&T football team coach, expressed his disappointment with the squad’s 1-0 loss against Panama, in a friendly football international at the Ato Boldon Stadium, Couva.

And the ex-national central defender also highlighted the need for immediate improvement from the mostly local-based T&T players.

Jesus Gonzalez scored in the second minute of second-half stoppage time to ensure victory for the Panamanians.

The Central Americans fielded an entire local-based team, as they prepare for the 2018 FIFA World Cup in Russia, starting on June 14.

“Some of our passing was very erratic, and I think we can all see where the work needs to be done with the local players, when we come up against good opposition,” he continued. “For a lot of the people who were asking about who should be in the team, I think we got the answers. I wasn’t pleased with the performance.”

Centre-back Daneil Cyrus, who wore the captain’s armband for the first time, winger Cordell Cato and substitute striker Nicholas Dillon, in his first international, were the only foreign-based players selected by Lawrence.

Lawrence admitted, “You can see what qualities that some of the (local) players can offer us and I think some of them have hit their levels, they can’t go the extra bit that is required. But, at the same time, a lot of them are still young and we have to work with them, to try and improve them.”

Referring to Gonzalez’s winner, Lawrence said, “The goal we conceded came from an error by a senior player. It just shows that football, sometimes, is all about concentration ...”

Lawrence was asked about the lack of quality, both in terms of the midfield and forward departments.

On the midfield issue, he noted, “It was a clear concern because in the middle of the park, we did not have that ambition to try (to) receive the ball and create things.”

About the strikers, Lawrence said, “It will be great if we have a young Stern John now because, for all the criticism he took over the years, his record (a T&T-leading 70 international goals) still stands. ”

Carlon Hughes, of Super League champions Guaya United, was the leading scorer for the 2017 season with 30 goals. But Lawrence spoke about the gap between the Super League and international football.

Referring to the inclusion of FC Santa Rosa striker Keron Clarke for the July 26, 2017 friendly away to Ecuador (T&T lost 3-1), Lawrence noted, “He said to me ‘after 20 minutes I could have easily asked to come off the football pitch’. That was how big the guy found it.

“It is not easy for a football player that does not train consistently to come in and play at this level. I’ve seen the player and I think, at this time, it’s not what we need.”

Lawrence also made a plea for top-flight domestic football to resume as soon as possible.

“At the moment we don’t have any leagues apart from minor leagues,” he said.

“Moore’s problem wasn’t the position he played in,” said the T&T coach.

“There were problems in terms of his technical ability, his understanding and his work ethic.”

About Goddard, Lawrence noted, “He’ll give you everything, he’s a heart-and-soul player but he just lacked a bit of ambition, to be brave on the ball going forward.”