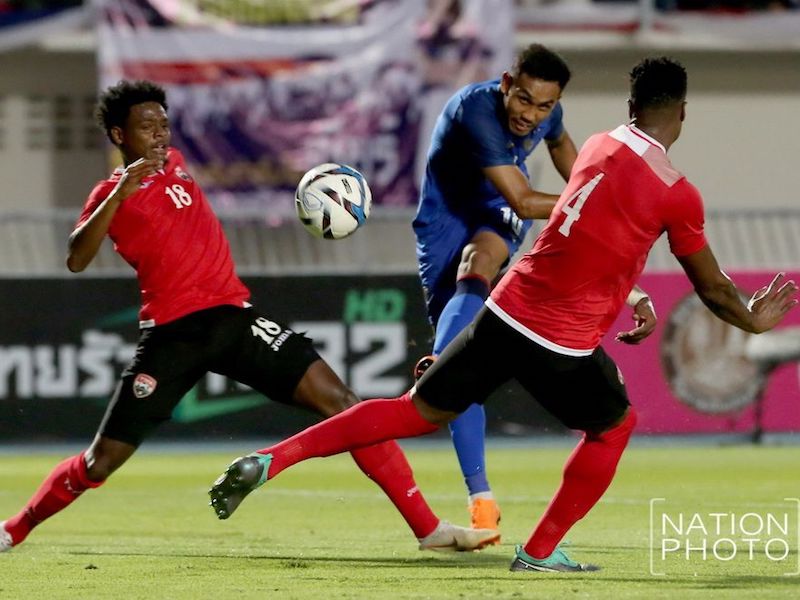 Trinidad and Tobago’s Senior Men went down 1-0 to Thailand in Sunday’s International friendly at the Suphan Buri Municipality Stadium in Bangkok.

The winning goal was scored in the 66th minute by Thitipan Puangchan. Midfielder Tanaboon Kesarat moved goalwards before slipping to Puangchan who placed the pall past goalkeeper Marvin Phillip with ease for the opener.

T&T forward Shahdon Winchester had a near miss when his shot went wide of the near right post in the  first half from a Nathan Lewis cross. Lewis had T&T’s best opportunity when he controlled well just inside the penalty box but his shot was blocked by the advancing goalkeeper before half time. T&T were forced to defend well against the pacey Thailand players but did manage to create further chances on goal. Winchester would go close again in the second half with a header just went over bar.

T&T’s Akeem Humphrey was stretchered off the field and taken to hospital after an awkward landing but his reported to be resting comfortably having sustained soft tissue injuries to the  neck, thoracic and lumbar spine. According to team doctor Israel Dowlat, “Thankfully nothing was broken or dislocated.

T&T head coach Dennis Lawrence said in the post-match press conference – “It was a very good game The both teams were very competitive. I think we both tried to play the game in the right way. We tried to move the ball.  I thought in the first half in particular  Thailand were a bit quicker to the ball in midfield. But in general I thought we both had even enough chances. Overall I thought it was a good, competitive game for the both teams.

“This is all part of our process in preparing for the Gold Cup next year in June and we’ll continue to play games in the international window so that we can make sure the the group can get the synergy and synchronization among the boys.”