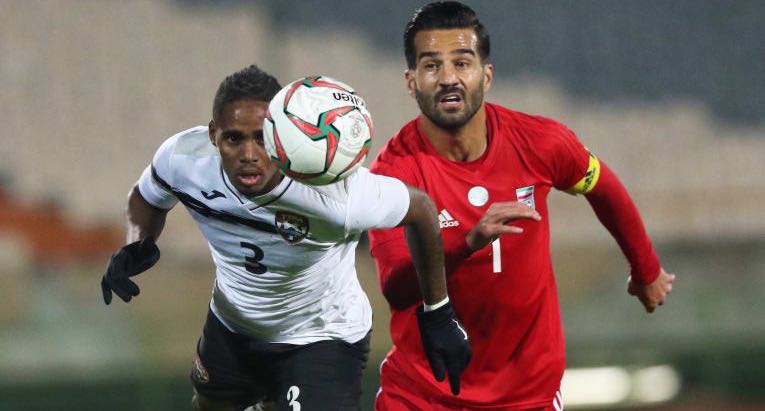 Trinidad and Tobago’s Senior Men put on a gritty, composed and workmanlike showing against Iran as they fell 1-0 to a 50th minute item in Thursday’s International Friendly at the Azadi Stadium in Tehran.

Karim Ansarifard scored the lone item in the 50th minute after T&T Warriors held their own in the first half to go into the interval at 0-0 against an Iran team that has qualified for three of the last four FIFA World Cups and managed a 1-1 draw with Portugal at Russia 2018.

There was a minute silence before kick off in remembrance of former T&T defender Jlloyd Samuel who played in Iran for just over three years before tragically losing his life in a car accident in England in May.

T&T actually had the first real look at goal as early as the second minute when a long delivery by skipper Khaleem Hyland was picked out by Joevin Jones who went for goal and surprised everyone with the effort which rebounded off the upright. It was an early scare for the hosts and a signal that Lawrence’s men meant business on the chilly evening. It was one of the few days that didn’t contain rainfall in the four days that the T&T team had been in Tehran but the persistent showers during the week has caused a heavy outfield which posed some challenges to both teams. But the game was not short of activity as the 11,000 fans soaked up the action.

Nottingham Forest’s Ansarifard had a 31st minute penalty stopped by goalkeeper Marvin Phillip who later confessed that he knew Ansarifard would go down the right after reviewing video reports by the team analyst this week. The ball fell for the Nottingham Forest forward but he could only blast over bar.

T&T continued to show tenacity and stood up to the aggression of the hosts. On 44 minutes, Lester Peltier, in his first match in three years for T&T, forced himself into a good position on the right and cleverly played one over with the outside of his right boot but the onrushing Nathan Lewis could not connect well enough from the six yard. Skipper Hyland and Paul teamed up well in the middle of the park while the backline of Sheldon Bateau, Daneil Cyrus, Tristan Hodge and Alvin Jones were never intimidated by the 2018 World Cup participants.

Cordell Cato and Duane Muckette came off the bench in the second half to put in a good shift while National Under 20 forward made his senior international debut ten minutes from time against an Iran outfit that included nine members of their 2018 World Cup squad in Russia with six of them starting the encounter.

Highlights with Iran vs Trinidad & Tobago

On the heels of a 1-0 tri­umph over the T&T “So­ca War­riors” in an in­ter­na­tion­al friend­ly match in Tehran, Iran on Thurs­day, Iran’s coach Car­los Queiroz said, he was im­pressed with the lev­el of com­pe­ti­tion by the vis­it­ing T&T team.

Queiroz, a for­mer Por­tu­gal na­tion­al coach who was an as­sis­tant to coach­ing mae­stro Sir Alex Fer­gu­son at Man­ches­ter Unit­ed, told the T&T me­dia in a rare dress­ing room in­ter­view, it was a good out­ing that was ham­pered on­ly by the play­ing con­di­tions.

“To­day, un­for­tu­nate­ly, the pitch was not so good for both teams as it has been rain­ing a lot in Iran but I think at the end of the day, there were lots of ben­e­fits for both sides. Since 2014 we have not met each oth­er,” Queiroz said.

Hav­ing played against the T&T team four years ago, Queiroz said he has seen tremen­dous im­prove­ments, say­ing the team is much more com­pact, more ag­gres­sive and more or­gan­ised with young fresh blood in it.

Iran won the match cour­tesy of a lone strike from Karim Ansar­i­fard in the 50th minute at the Aza­di Sta­di­um.

“It was a very good, com­pet­i­tive game. Ex­act­ly the type of game we ex­pect­ed. As I said be­fore, Iran is a very ex­pe­ri­enced team and I think tonight (Thurs­day) both teams ben­e­fit­ted from the ex­er­cise. I was pleased with the ef­fort of my boys but as I said, well done to Iran on the vic­to­ry tonight (Thurs­day).

“You can see the Irani team is well coached. They all knew what they were do­ing, but we came pre­pared for the game so it was not go­ing to be easy for them. I felt in the first half we al­lowed Iran too much pos­ses­sion and we tried to cor­rect it in the sec­ond half which I thought we did. There weren’t many chances for us but we got a few.”