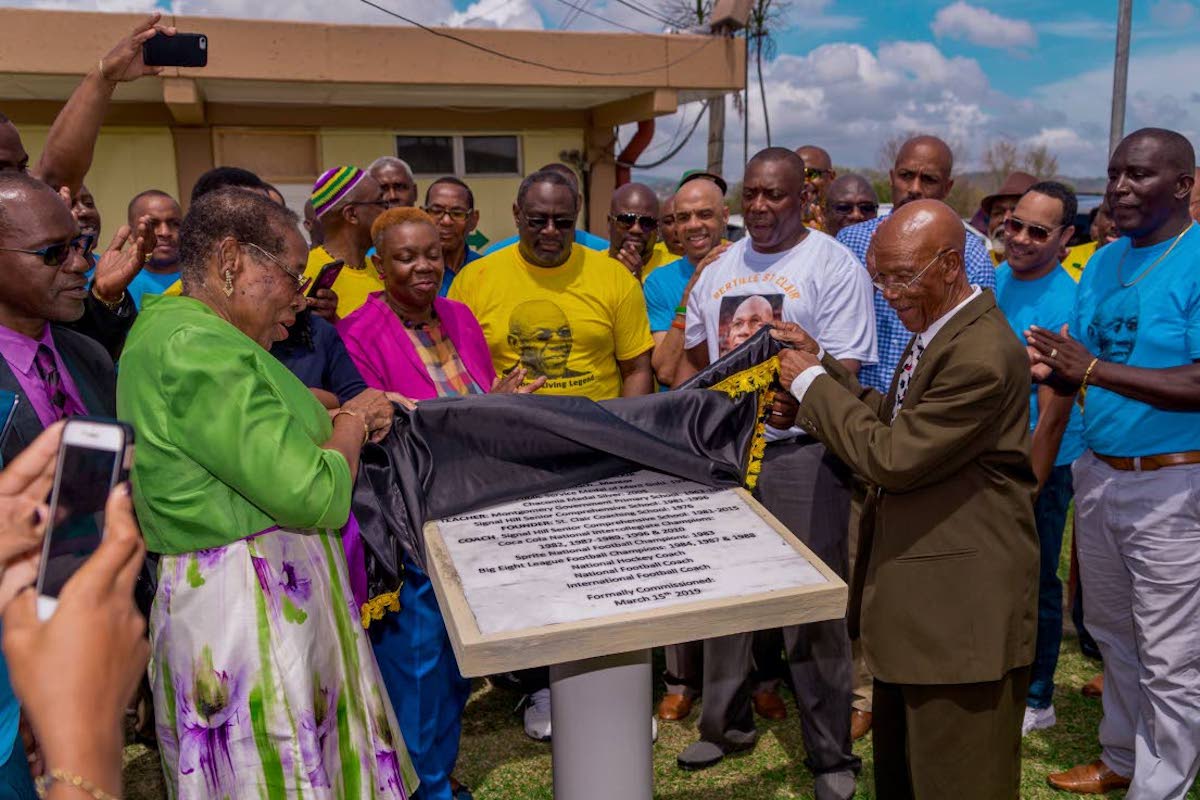 REVERED football coach and administrator Bertille St Clair has received a glorious tribute, celebrating a decades-long career in sport and culture in his native Tobago and the wider football fraternity.

The church service launched three days of activities commemorating St Clair’s work as a coach and administrator, which included the unveiling of a commemorative stone at Signal Hill Secondary, an awards ceremony at Shaw Park Cultural Complex and a football extravaganza at Mt Pleasant Recreation Ground. The Signal Hill Secondary School Recreation Ground was also named after St Clair.

A recipient of the Chaconia Silver and Hummingbird Gold medals for his contribution to football, St Clair is credited with nurturing the talent of former Strike Squad and Manchester United striker Dwight Yorke and others.

“When I examined the 80s when all of this took place, I saw there was a need for a particular kind of leadership in Tobago and that came from Mr Bertille St Clair,” he told the gathering.

“Therefore, that is why I ranked him as a real legend because that period, that is where you compare people and see what they have done, when Tobago needed that lift, to go Trinidad and show that we could have beat people and come back in Tobago. He was the man who inspired that kind of leadership,” King added.

King’s tribute focussed on St Clair’s fighting spirit and discipline as a coach.

“Don’t disturb him in his coaching because he would tell you that if you are a doctor and you are operating, you not going to disturb a doctor when he is operating. So, don’t disturb me at all. Leave me with my work, let me finish my work.”

However, he joked that, as a young footballer, St Clair was “a pain in my backside.”

“And every footballer who played for him, don’t tell me you don’t feel the same,” Dillon said.

“But, as a man, I thank you.... I hated practising with you. But I loved playing games for you because I knew we were always the fittest and most intelligent team on the field, except when I was playing for Bishop’s,” he joked.

Laughs aside, Dillon said his experience in the US has allowed him to “see people at the end of their lives.”

“And no one ever talks about money, house or car. The only thing they speak of is the experience with people.”

Dillon said he grasped the opportunity to be a part of the celebration.

“I am grateful that you are a part of my life.”

St Clair, in a message to students of Signal Hill yesterday, stressed that success only comes through discipline. “If you don’t have any discipline, you can’t go anywhere – it’s so important. The sky’s the limit and what you put in is what you will get out. Respect your teachers; respect your fellow men, because we want you to be proud. You are from Signal Hill. I promise you from this year on, the school will get back to the winning place,” he said. (additional reporting by Elizabeth Gonzales)