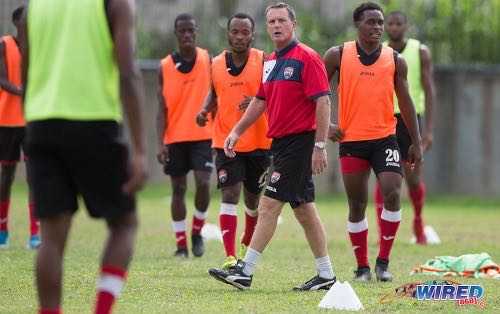 THE continued prohibition of domestic club football by the Government has shrunk the chances of a locally-based professional player being called up to represent T&T at next year’s World Cup qualifiers in March.

Since the pandemic forced the shutdown of T&T’s two top-flight competitions – TT Pro League and TT Super League – eight months ago, local players have been unable to get in the required amount of training time.

However, several of T&T’s foreign-based footballers have already resumed training and competing at an elite level.

In this regard, national senior men’s team coach Terry Fenwick has now opted to scout the majority of his future prospects from those who have returned to competition and are active players on the international circuit.

Although T&T is still indefinitely suspended from all football-related activity, Fenwick plans to utilise the December 7-17 international window to re-establish a connection with some of his potential selections.

Owing to the FIFA suspension, T&T’s senior team will be inactive during the window.

“We’re going into competitive games, World Cup qualifiers, totally unprepared. My staff and I will try our best to select the senior team from players playing in leagues elsewhere. We’ve got no choice because the TT Pro League and Super League are still yet to resume.

“With the local club football restrictions remaining in place, we would probably be limited to use locally-based players. So it’s not a bad call to use players that are currently playing in the bigger and better leagues around the world,” he said.

Fenwick intends to track the progress of these foreign-based athletes by live-streaming the games they participate in to observe their performances.

Achieving a training camp with a combination of both local and foreign-based players would be difficult owing to global travel restrictions.

“During the FIFA window, there’s an opportunity to get them training. I will be looking at the foreign players, how they get on, I’ll be checking them on several different sites that cover all games.

“I will not see them face-to-face but I will be checking them out to pick the best players that are playing in best teams at the best levels. So when competitive games come around in March, we’ve got a team,” he added.

Fenwick plans to host his first training session on Wednesday at the Hasely Crawford Stadium in Mucurapo or at the St James Barracks training ground. Wednesday’s session would include a light resumption to training followed by a full resurgence from November 23.

With FIFA now satisfied with the TT Football Association’s decision to withdraw its appeal against it from the CAS, T&T’s chances of having its suspension lifted by or before December 18 have increased.

FIFA said it would lift the suspension when the TTFA fully complies with its obligations as a member of FIFA, including recognising the legitimacy of the committee and bringing its statutes into line with FIFA’s.

If the suspension is not lifted by December 18, T&T could miss the 2021 Concacaf Gold Cup and the 2022 Qatar World Cup qualifiers.

Over the past eight months, local football has suffered tremendously owing to the pandemic. Fenwick said the legal wrangling between TTFA and the sport’s global governing body has only placed added pressure on an already challenging situation.

“We hope for a revival. We’re being dealt a shorthand. There are nations miles ahead of us as far as development and organisation. They don’t have the bickering at the top that we’ve got across the board.

They’re moving their game, sport and national teams on. We’ve got to get back on that level as well.

“With the Gold Cup in June 2021, by then, hopefully, we would have had two or three international windows so I can then get a good bearing on the players that we have available here in T&T and internationally.

“By then you would expect the Pro League and Super league to be up and running. But that’s not a guarantee and we cannot take any chances. We’ve got to make sure we’re competitive when these games come around. That’s me and my staff planning ahead as we probably can,” he concluded.