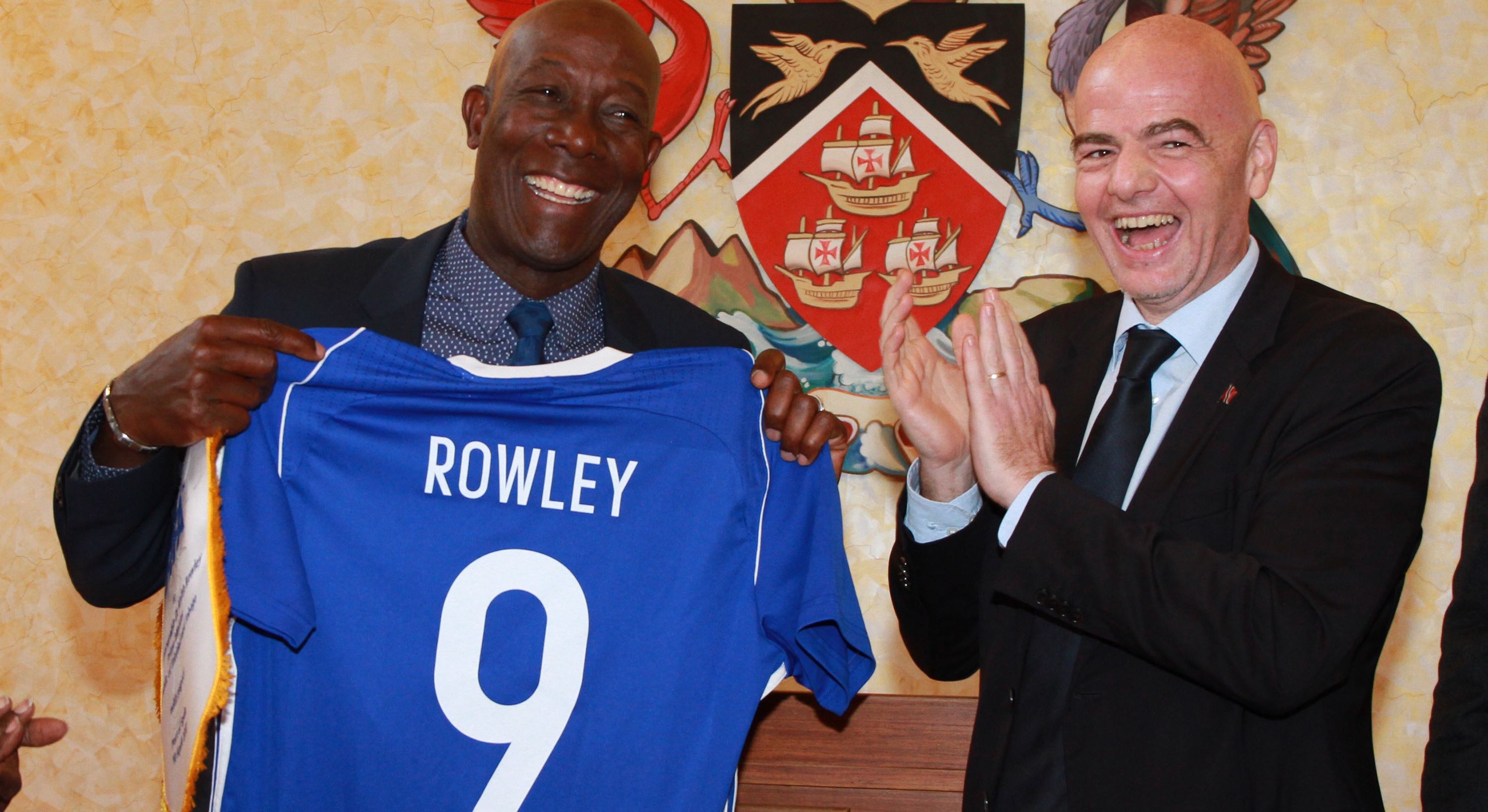 The Soca Warriors’ Qatar 2022 World Cup dreams are being stymied by the Trinidad and Tobago government’s Covid-19 rules and, according to football insiders, the Ministry of Health’s apparent reluctance to relax them for the Men’s National Senior Team.

There have been 107 million cases of infection worldwide since the start of the novel coronavirus pandemic, with 2.36 million deaths. However, the twin island republic has been widely praised for its response to the virus.

As of yesterday evening, the Ministry of Health reported 181 active cases of Covid-19 in Trinidad and Tobago, with 14 positives over the last 24 hours. The total number of infections here since last March is 7,631 with 136 deaths.

However, at least two persons closely involved with the national football team accused chief medical officer Dr Roshan Parasram of being too inflexible with the Soca Warriors. Both spoke on condition of anonymity.

The football team was granted a government exemption to play the United States in an exhibition match in Orlando on 31 January, which they lost 7-0—a joint national record.

Trinidad and Tobago head coach Terry Fenwick hoped to continue his team preparations with training sessions during their subsequent seven day quarantine at the TTFA Home of Football Wellness Centre in Couva. And the Englishman wanted St Vincent and the Grenadines and Dominica to fly in to face the Warriors in warm-up matches, as all three nations were quarantined there.

It turned out to be wishful thinking.

The Ato Boldon Stadium is a stone’s throw from the Home of Football. However, the Ministry of Health snubbed their request to train there and instead allegedly suggested they practice at a small field within the HoF facility.

Even then, there was a catch. The training was to be restricted to groups of five players; and, if they agreed, they would also have to spend an additional seven days at the quarantine facility.

“It is a cow field with old metal and pipe on it,” said the football insider, “and four feet of grass.”

“The field is not fit to train,” said a team member, who was part of the quarantine party.

The Home of Football, a controversial facility constructed under the guidance of ex-Trinidad and Tobago Football Association (TTFA) president David John-Williams, does not have a functioning gym. As a result, the players spent the last week largely confined to their rooms.

The mood within the camp worsened considerably when the players and staff members left quarantine on Tuesday, only to be warned that they could face prosecution if they left their homes over the next seven days—and training sessions are out of the question.

The players and staff, according to the team source, have tested six times in the past two weeks and every result was negative. Why then, they ask, are they still being stopped from getting on with the football programme?

“Basically, we feel we are under a big attack,” said the team source. “From the time we arrived in Orlando, we were in a bubble; and when we returned to Trinidad we were in quarantine. But now when we are looking forward to resume training, the [Office of the] CMOH is calling players and staff members and threatening them, saying they will visit their homes to ensure they are there.

“[…] I asked if I could send a breakdown of our negative results since we left to go to Orlando. They said ‘no’ and they are just following the rules.

“Basically they are saying this is their protocols and we have to abide by it.”

If any national player or staff member is found to be in breach of the Quarantine Act, the penalty is a fine of TT$6,000 and six months imprisonment.

“This is totally different from how the CPL (Caribbean Premier League) players were dealt with,” said a football insider. “Those players were allowed to train and move about the Hilton Hotel after just three days of quarantine!”

It is not a perfect analogy. During the four week CPL competition, the cricketers remained within the ‘bubble’ of the Hilton Hotel throughout. In contrast, the Warriors head home to their families after each session.

Still, the national footballers already have special dispensation to practice. Is it worth stopping them now—after their negative tests—but allowing them to train in a week’s time in virtually the same conditions?

And that’s to say nothing of the illegal training sessions and pick-up matches that occur almost daily around the country.

Neither Dr Parasram nor Minister of Health Terrence Deyalsingh responded to Wired868’s request for comment on the complaints.

But then a big part of the problem, according to the insider, remains the perceived aloofness of the Ministry of Health’s senior officials.

The Fifa-appointed normalisation committee, which replaced the TTFA Board in 2020, requested clearance from the Ministry of Health to host Dominica and St Vincent and the Grenadines for a three-nation tournament later this month. And, last week, they also sought approval to host Guyana for Trinidad and Tobago’s opening World Cup qualifier on 25 March.

In each case, they claimed that no response was given to the local football body.

At a press conference yesterday, the health minister said Dr Parasram was ‘in discussions with the football fraternity to deal with that issue’. He hinted it was a not a straightforward matter.

“We are very concerned about people coming into the country and not quarantining properly and possibly bringing in the new variants,” said Deyalsingh. “[…] So, the decision would be made in the best interest of protecting the safety of our population.”

It was not with the Warriors wanted to hear.

“The normalisation committee has been pleaded with the CMO to get a letter from the minister of health that they can send to Concacaf, granting approval to play World Cup games in Trinidad,” said the insider. “And the CMO has not responded. If that continues, we will get no practice games before the Guyana match and we may lose our home game—because of a simple approval we need from the Ministry of Health.

“Guyana is our toughest opponent in that five team group and losing the chance to play that game at home can be crucial… Whoever wins that game will virtually get through to the next round.”

The other three nations in Group F are St Kitts and Nevis, Puerto Rico and the Bahamas.

Fifa rules dictate that the TTFA has until 11 March to confirm it can host Guyana as well as the necessary Fifa match officials for the affair. If not, the game will be moved to a neutral venue.

“We are hoping that the prime minister will intervene,” said the insider. “The prime minister gave a directive to host the CPL; and it was on his authority that the national team was given permission to train. At present, it feels like [the Ministry of Health is] doing everything to muzzle them.

“What we are seeing is disrespectful, embarrassing and a virtual sabotage of the national team by the CMO. It is a total contrast to what was done with the CPL.”

The Warriors, according to the team source, have not given up on getting their desired players based in the United Kingdom. Fenwick said he wants to recruit at least a dozen players from his homeland, most of whom are uncapped and don’t hold Trinidad and Tobago passports but are eligible due to parentage.

The UK’s Covid-19 protocols allow exemptions for ‘elite athletes’ to travel, without requiring quarantine on their return. But requests for that privilege are to be handled on a case by case basis by its health ministry, with the England Football Association also involved in the process.

Guyana is among 33 banned nations by the British government and no exemption is possible for travel there. The spine of the ‘Golden Jaguars’, including defender Samuel Cox and midfielder Neil Danns, play in the English lower leagues.

Fifa’s current protocols allow clubs to refuse to players for international duty once they will face more than four days of quarantine. If such players do not get an exemption from England’s FA to represent their adopted countries, their clubs can refuse to release them—regardless of what the Ministry of Health decides.

“We have already reached out the clubs and it feels very positive for us,” said the source. “But again, we need to know where we will be playing and, at the moment, all of that is up in the air. We are not trying to burn any bridges but we will like to train, especially as we have all our negative results.

“We can create carpools for the guys to get to training and provide shuttle for those who don’t have vehicles. We have already been set back big time, but we are doing everything we can to have the best team possible for the Guyana game.”

The Warriors’ immediate future may owe much to Dr Parasram; and perhaps to Dr Rowley. And, certainly, to the Covid-19 virus.

Covid-19 restrictions may not have barred national sports teams from practising, but the pandemic could potentially have an early impact on the Qatar 2022 World Cup qualifying campaign of the Trinidad and Tobago Men’s National Senior Football Team.

The Soca Warriors are due to host Guyana in their opening game on 25 March, under new head coach Terry Fenwick. But a new Fifa ruling, plus the current non-commitment to providing quarantine exemptions for travelling teams, means the Trinidad and Tobago Football Association (TTFA) might be forced to concede home advantage.

At present, the TTFA is being run by a Fifa-appointed normalisation committee headed by businessman Robert Hadad.

Normal Fifa rules require clubs to release players to represent their countries on an international match day. However, as governments have enacted travel restrictions and mandatory quarantine periods to prevent the spread of the virus, Fifa created an exemption that allows clubs to deny their players leave to represent their home teams.

The new rules say clubs must release players except where: ‘there is a mandatory period of quarantine or self-isolation of at least five (5) days upon arrival’ either in the location of the club or the match venue. Clubs can also refuse to release players if there are travel restrictions to or from those locations.

That means if players don’t receive exemptions from travel restrictions and quarantine or self-isolation requirements, their clubs are under no obligation to let them play for their country teams.

In Trinidad and Tobago, the borders are closed to all but nationals, who still must apply for an exemption to enter the country. A returning national then faces a mandatory seven-day quarantine in a state facility, followed by another seven days of self-isolation.

The Warriors only emerged from quarantine yesterday at the Home of Football in Couva, since their international against the United States in Orlando on 31 January, which they lost 7-0.

As a host country, the Fifa rules require the TTFA to get exemptions for its players, the visiting team, and match officials to enter the country and skip any quarantine or self-isolation of more than five days.

With the match against Guyana carded for 25 March, that leaves the TTFA until 11 March to inform Fifa whether the T&T government will grant the necessary exemptions. The UK government, for instance, grants exemptions to certain ‘elite athletes’ to travel and play without quarantine.

The Warriors, who are also scheduled to play away to Puerto Rico on 28 March, could be forced to play their opening ‘home game’ at a neutral venue if the Dr Keith Rowley-led government does not play along.

Speaking at the Ministry of Health’s virtual media conference, Minister of Health Terrence Deyalsingh said: “The CMO [chief medical officer Dr Roshan Parasram] is in contact and in discussions with the football fraternity to deal with that issue.

“We are very concerned about people coming into the country and not quarantining properly and possibly bringing in the new variants… So, the decision would be made in the best interest of protecting the safety of our population.”