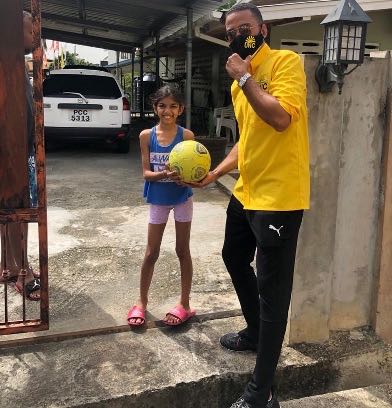 wo-time Trinidad and Tobago Footballer of the Year David Nakhid has appealed a US District judge’s decision to dismiss his racial discrimination lawsuit brought against American University (AU).

Nakhid, a former AU player, sued the university on the basis that he was more qualified than Zach Samol, a white man, who was ultimately hired to serve as the school’s head coach.

The ex-national player also argued that AU had violated Title VII of the Civil Rights Act and 42 US Code 1981 for race-based discrimination when he was not hired or interviewed for the job.

US District judge Amit Mehta said that AU denied any racial discrimination and claimed that Nakhid, despite a successful career as both a player and club team head coach, had no collegiate coaching experience and that the university was looking for coaches with a college background.

“We put in the appeal on Wednesday. My lawyer was hoping for a different decision from the judge but she expected this ruling. But she had our appeal ready for the Court of Appeal who will look at things in a bit more detail, God willing. And overturn the ruling,” said Nakhid.

He added that the appeal will be heard by the court later on this year and remains hopeful for a better judgment.

Nakhid, who holds a UEFA “A” licence, applied for the job in 2018 although he was based in Lebanon at the time. He had previously expressed interest in the job and was told to apply online. However, he never made it to the initial interview round.

According to an online report by AU’s The Eagle, the US District Court for the District of Columbia agreed with AU’s defence and granted the University summary judgment in an opinion written by Mehta.

“The Court concluded that neither federal statute granted protections to a non-citizen who wasn’t living within US borders. Nakhid is a citizen of T&T and was living in Lebanon at the time he applied for the vacant coaching position.”

The opinion also concluded that Nakhid had not brought sufficient evidence to support his discrimination claims.

“The Court stated that Nakhid was qualified for the position of men’s soccer head coach, but argued that Nakhid’s claims of racial discrimination were flawed based on the facts of the case.”

However, the 57-year-old ex-player defended his decision to sue the institution and believes he may have a better chance at winning his case through the Court of Appeal.

“There was an attempt (by AU) to reach an agreement which we refused and that’s why they took it to a Federal Court. They say the coach that was selected had 18 years of college experience.

“But when you look at that, he (Samol) was never a head coach at any point in his career; he was always an assistant coach. Those little details will make a difference when you appeal.

“He made the statement that he also played professional football. But he played in a third or fourth division in the US whereas I played in Europe at the highest level,” Nakhid said.

The ex-coach said he didn’t agree to settle because he wanted to highlight that black and minority people in American football only amounted to about 30 per cent. In coaching, he said, people of colour were represented under two per cent.

“I want to highlight those things and hopefully we get to do so in a trial. We need to highlight the inequities and lack of representation of black and minorities in coaching,” he added.

According to court records, the search for a new men’s head coach in 2018 received 100 applications that were reviewed by an all-white four-member committee. Of the 100, eight applicants made it to the initial interview round, of which two applicants were Black, according to the document.

The Eagle reported, “The second round of interviews was held with five of the prospective coaches via Skype, and then a third and final on-campus interview was held with two of the applicants, one of whom was Black, as well as one of the assistant coaches.”

AU’s chief communications officer Matthew Bennett wrote in an email to the Eagle.

“We are pleased with the court’s decision to grant a summary judgment. AU utilises thorough diverse hiring practices and is committed to fostering a welcoming workplace environment.”

Nakhid is currently an opposition senator in the TT Senate as a member of the United National Congress party and president and owner of the David Nakhid International Football Academy. Nakhid previously served as captain for the TT and unsuccessfully ran for president of Fifa in 2015.

He is also the first senior national to play in the European first division. He made his debut in January 1989 with Grasshopper Club Zurich (Switzerland). Nakhid then transferred to Zulte Waregem (Belgium), POAK (Greece), New England Revolution (USA), Al Emirates (UAE) and Al Ansar (Lebanon).