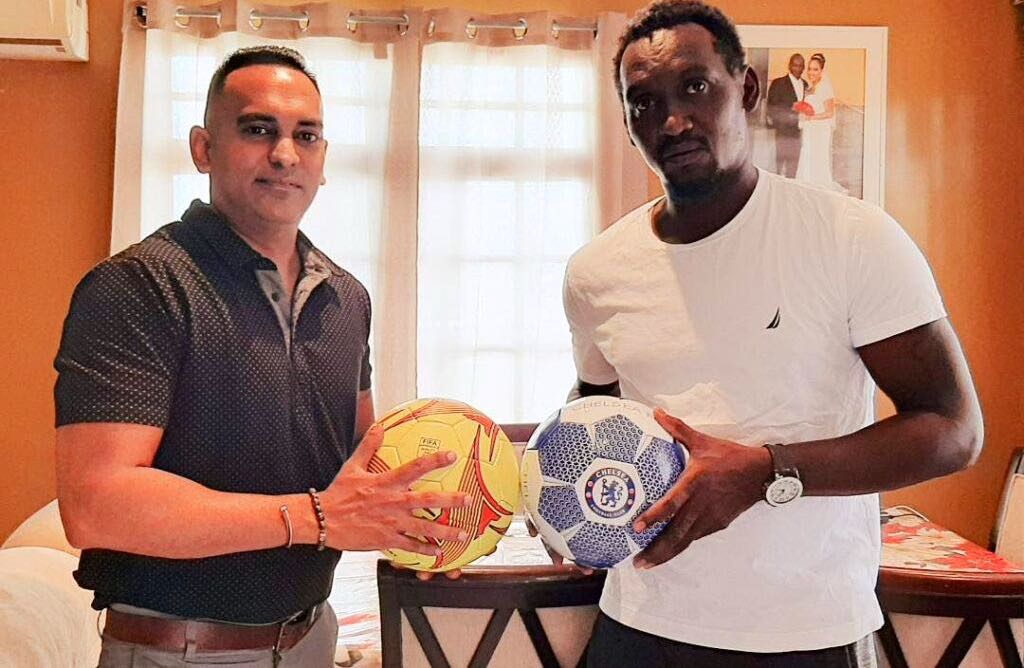 Former Trinidad and Tobago midfielder Aurtis Whitley, a member of this country’s 2006 World Cup squad, is turning his attention toward passing on his experience to young footballers in Oropune Gardens. where he resides.

Whitley recently received support from TT Football Association (TTFA) director of communications Shaun Fuentes, through his company Pushing Limits, which provided a supply of footballs, training gear and uniforms for the current project. Through the affiliation with Pushing Limits, of which Fuentes is managing director, Whitley will receive a monthly provision of supplies for the coaching sessions as well as medical screenings and media training for the youngsters for a six-month period in the first instance.

Whitley, a former San Juan Jabloteh standout, said he felt the time was right to pass on whatever he could to the next generation.

“This is something I have been working on for some time. Of course my playing days were some of the best times in my life, especially playing in the World Cup in Germany. But this is a different calling and I just knew it to myself that I have to give back something to the youths in the community. This is just a small start but I will be looking to keep going,” Whitley said.

Whitley said when he reached out to Fuentes for assistance, he did not hesitate.

"We are doing this for the youths and I am thankful to God and my family to be able to contribute in this way,” Whitley said.

Fuentes added that he was encouraged by the initiative and saw it as a way to make a contribution to youth development while also showing support for Whitley.

“Aurtis and I had some discussion earlier this year and he reached out for some support in whatever way possible towards his involvement with the youngsters in the Oropune area. We’ve had a professional relationship at the national team level dating back to 2000, and of course the 2006 World Cup of which Aurtis was an integral part.

"But this collaboration is different and it brings a warm feeling to see athletes such as Aurtis making an effort to give back in a productive and meaningful way. I had no hesitation towards it and decided to partner and offer support through my group Pushing Limits where we’ll be aiming to provide whatever assistance possible to Aurtis and the youngsters,” Fuentes said.

“I believe strongly in seeing our local sporting heroes interacting and passing on their wisdom and knowledge to aspiring athletes and members of our society and local communities."

Fuentes, through Pushing Limits, has also provided support to the Dunstan Williams Soccer Academy by way of a workshop and presentation on preparing athletes to handle the media, ahead of the Academy’s upcoming appearance at the Dallas Cup 2022. Among the topics were: how to present yourself before the media; body language; social media training; facing the camera; and interview sessions, among others. The session took place last week at the Presentation College, San Fernando auditorium with players from Presentation College, St Benedict’s College, Naparima College and Pleasantville Secondary in attendance.

He also offered support and held similar sessions with Joel Bailey’s Gold Generation Next Coaching School in San Fernando, Stern John’s Academy, the Grenada FA as well as offered support to the Belize FA for the 2022 World Cup qualifiers.

Fuentes has undergone training from world-renowned New York-based media trainer TJ Walker as well as FIFA experts in media management and relations during his time as a FIFA Media Officer dating back to 2007, which included appointments at the 2010 FIFA World Cup in South Africa and other youth World Cups in Nigeria and Turkey.