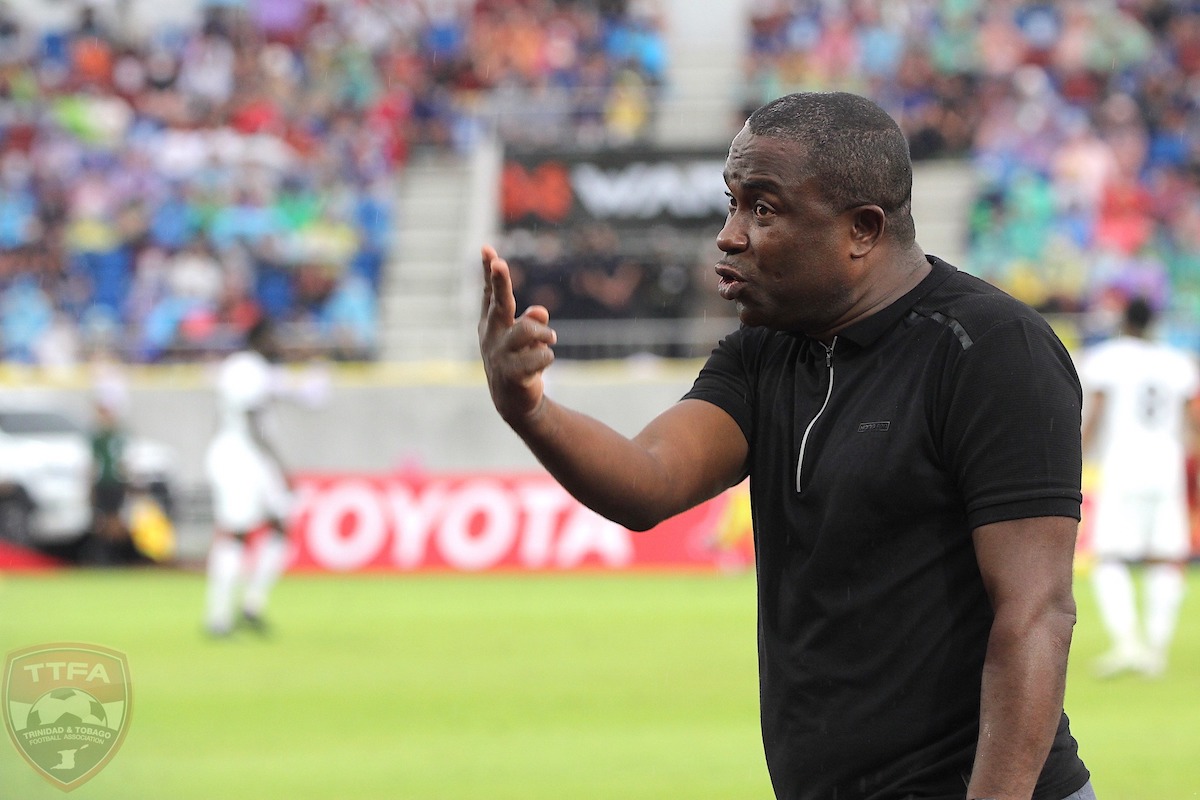 EVEN AS men’s national coach Angus Eve continues to lament the non-functioning of a local national football league, the Soca warriors have dropped a further three spots in FIFA’s men’s world rankings.

“Everyone has gone way ahead of us. But we have to keep on fighting,” said Eve in response to news of his team’s further fall on FIFA’s world ranking list.

Released Thursday. FIFA’s October ranking has Brazil as the top-ranked football-playing country in the world, with Trinidad & Tobago ranked #104, one spot ahead of New Zealand and one behind Mauritania. Tajikistan and Thailand, who both defeated T&T 2-1 at the Kings Cup in Thailand, are close behind, ranked #109 and #111, respectively.

Once ranked as high as #25 in the world, Trinidad and Tobago are now just two spots higher than their lowest-ever ranking. T&T are currently 11th-ranked in the Caribbean, North & Central American (Concacaf) region, and also trail Jamaica (#64), Curaçao (#86) and Haiti (#87)in the Caribbean.
Eve pointed out that his Soca Warriors had not played a match in three months, prior to being invited to Thailand to play in the Kings Cup late last month.

“We clearly not playing as much as the other teams in our zone and a lot of it boils down to financial difficulties for us to organise matches and stuff,” Eve declared. ”All of those things affect your rankings...when you are not playing on a regular basis.”

Although he hopes to climb the ladder. Eve thinks that the world-ranking is not yet as important as when 2026 FIFA World Cup qualifying comes around.
“That only affects you when it comes time for World Cup qualifying placement,“ Eve explained, ”(Because) we were ranked badly the last time, we had to go into the (World Cup qualifying) preliminary stages, which we did not come out of.”

His first ambition is to qualify for the Concacaf Gold Cup and earn qualification to the Concacaf Nations League top rung. Along the way, Eve believes T&T’s world ranking will also rise.

“The (CONCACAF) Gold Cup (qualifying) it’s in our hands because we have two more matches left in the (Nations League) group. Even if we come second, we have a playoff to play.”
What Eve believes is most crucial to improving his team’s ranking is having his players competing in an organised national league, rather than resorting to playing in 7-a-side tournaments.

“We have to have a proper league running to give the locally based players opportunities,” Eve declared, “I want to have a lot of them in the squad but it is very difficult when they are not playing any competitive football.

“I am watching the Ministry throwing a seven-a-side football league, and all of the boys playing in there because they have no league to play in. Once these things are sorted out, we could probably see the team going back to where we were.”

FIFA’s latest rankings show that a total of 53 UEFA Nations League matches and 119 friendlies were played in the last international break before the FIFA World Cup Qatar 2022, which begins on November 20.

As well as giving the 32 qualifiers for the upcoming global finals one last dress rehearsal, the matches also had an impact on the latest FIFA/Cola-Cola World Ranking list.
Top-ranked Brazil will embark on their bid to win a sixth world title as ranking leaders. In beating Ghana and Tunisia in their two friendlies last week, Brazil widened the gap between themselves and their nearest challengers, Belgium (2nd), who lost to Netherlands (8th) in the Nations League. Argentina (3rd) complete the podium.