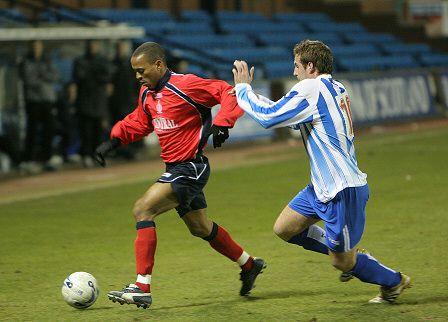 Theobald was invited for training with San Jose last week and it appears that a deal was set to be offered with the club’s head coach Frank Yallop indicating that his club was in quick need of a midfielder. Yallop signed T&T forward Cornell Glen on Thursday and the club also asked the speedy striker to try to convince Theobald to make the trip over.

But Theobald’s said his priorities lie solely with the “Soca Warriors” at the moment.

“They wanted me to come last week but to me, I felt it wasn’t the right timing to go over to a club before these two games we have coming up against Costa Rica and Mexico,” Theobald told TTFF Media on Monday.

“These two games are critical and I think this was one time where I had to put aside my personal interest with regards to getting a contract outside. The midfield area is competitive too and it is one of the more important parts of the team so I was thinking I should stay back and work as hard as possible to try and be in the best shape for the games. We all know how important it is to get three points. We don’t want to be putting too much pressure on ourselves but it’s a critical time,” Theobald added.

Meantime, head coach Russell Latapy is expected to have Scottish-based duo Marvin Andrews and Collin Samuel as well as Belgium-based midfielder Khaleem Hyland in his squad for training on Wednesday morning at the Larry Gomes Stadium.

Meantime, in the Costa Rican squad is promising 23-year-old midfielder  Brian Ruiz of Belgium club Gent  and their coach Rodrigo Kenton is a big fan of the rising talent but has placed a big responsibility on  veteran Walter Centeno.

A FIFA.com article on the weekend stated : “The biggest name of this surviving pair is 34-year-old creator-in-chief Walter Centeno, the figurehead of Kenton's young team and a man with appearances at two FIFA World Cup finals under his belt.

Kenton, who once offered his services to T&T while he was in charge of the Costa Rican Under 20 teams a few seasons ago, believes Ruiz is the key to his team’s success.

Centeno meantime feels he has a critical role to play in the team’s chances of getting to South Africa.

"The coach has given me a leadership role within the squad, and that means I always have to be motivated, very enthusiastic and show a lot of wisdom," The Tico captain told FIFA.com. "There was more experience in previous national teams but we're in a new era now. These are young guys who are doing very well."

Not all of the new faces are young, however, with Centeno's veteran status eclipsed by Freddy Fernandez. Unable to be ignored after superb performances for modest Costa Rican outfit Perez Zeledon, the 35-year-old defender only recently forced his way into the national-team picture. But Centeno and Fernandez aside, none of Costa Rica's starters against El Salvador in April were over the age of 28. Meanwhile Michael Umana, who like Centeno appeared in Germany, is still only 26.

The Ticos' metamorphosis is particularly evident in midfield, where two bright young things are fast becoming leading men. Charged with the play-making duties is Celso Borges, who does not turn 21 until 27 May. Indeed, the rangy and elegant Ruiz's performances for club and country have fed rumours he could soon be headed for one of Europe's major leagues.